In Conjunction, a “Year of Hamilton” Programming Will Include Author Talks, Tours, and Family-Friendly Activities

The city of New York gets a lot of attention in the Broadway smash hit Hamilton: An American Musical, but Philadelphia also played a major role in the life and work of Alexander Hamilton. 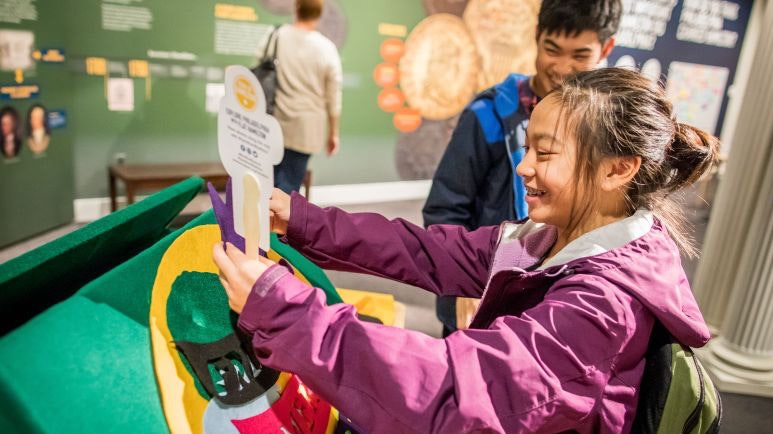 In Hamilton Was Here: Rising Up in Revolutionary Philadelphia, the Museum of the American Revolution will highlight the surprising connections between our own city and Hamilton’s extraordinary contributions to the nation’s founding. The experience will run from Oct. 27, 2018 – March 17, 2019. It is free with regular museum admission.

The experience is open on weekends from 10 a.m. – 5 p.m. and weekdays from 1 – 5 p.m. (weekday mornings are reserved for school groups). Bank of America is the presenting sponsor of the exhibit, and The Philadelphia Foundation is the Museum’s community partner.

Through playful activities, scenic environments, and interactive games, visitors will actively engage in the challenges of founding and maintaining a country as they follow Alexander Hamilton’s story through different locations in Philadelphia and the surrounding region. Each activity seeks to inspire visitors to think about Hamilton’s contributions to the founding of the United States and how they can carry these lessons forward as they face the challenges of citizenship today. Visitors can dress up in reproduction 1790s clothing, load a full-sized replica cannon, and design a coin inspired by early American symbols, among other activities.

Hamilton Was Here features six key sections that highlight different aspects of Hamilton’s political rise in the Philadelphia region, including his roles as an artillery officer in Washington’s army as it tried to defend the city from the British during the Revolutionary War; a political leader who helped create the United States Constitution; an advisor to President Washington when Philadelphia served as the national capital; and the first Secretary of the Treasury who envisioned the financial future of the nation in his Philadelphia office.

“We strive to tell the other side of each story – those that are lesser-known and often surprising. This experience is no exception,” said Dr. Philip Mead, Chief Historian and Director of Curatorial Affairs at the Museum. “Without Philadelphia, Alexander Hamilton might not have been the Alexander Hamilton we know today – his experiences in the city shaped his vision for the nation.”

To continue the experience, the Museum also will launch a “Year of Hamilton” programming, which will include a range of special events and programs dedicated to exploring Hamilton’s life and legacy. For more information, visit www.amrevmuseum.org/year-hamilton. 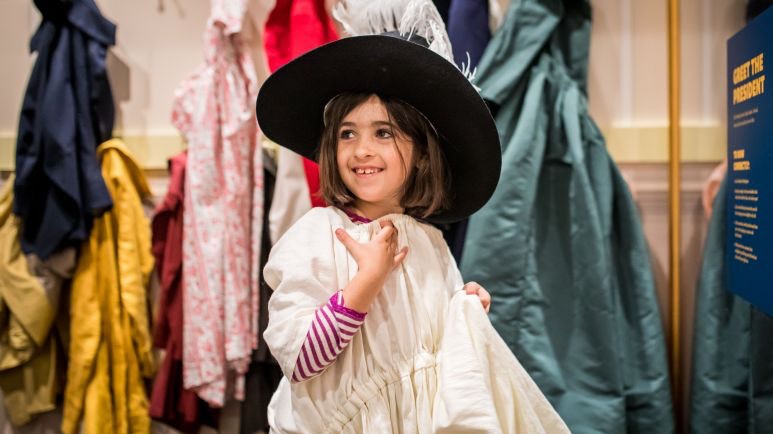 Over the course of the year, the Museum’s core exhibition will feature nearly 30 Hamilton-related artifacts, including objects on loan from the New-York Historical Society, the Library of Congress, and the Philadelphia History Museum: an 1825 portrait of Elizabeth Schuyler Hamilton; letters written by Alexander Hamilton at Valley Forge; a 1775 edition of one of Hamilton’s first political pamphlets The Farmer Refuted; and a sword that belonged to Tench Tilghman who also served General Washington as an aide-de-camp. In the Museum’s lobby, visitors can pose with life-size bronze statues depicting Hamilton’s fatal 1804 duel with Aaron Burr.

“As an early corporate supporter of the Museum and presenting sponsor of this exhibit, Bank of America is thrilled to support this important experience that sheds light on Alexander Hamilton’s connections to our city,” said Jim Dever, Philadelphia Market President, Bank of America. “The exhibit brings to life Hamilton’s role in the most significant event in American history, including his contributions to creating our country’s financial system – and we are proud to help make that possible for visitors of our region to enjoy.” 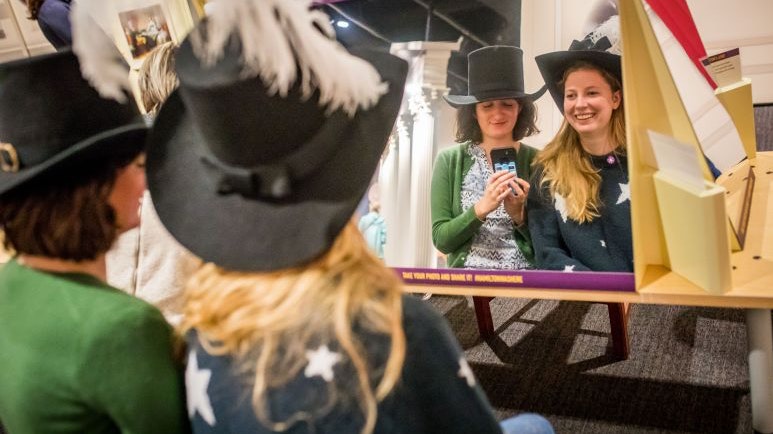 The Philadelphia Foundation is underwriting expenses associated with encouraging student and family access to Hamilton Was Here in the upcoming academic year, including program development and production, materials and supplies, and project evaluation.

“As Hamilton himself knew, cultural access can be the gateway to a lifetime of opportunities,” said Pedro A. Ramos, President and CEO of The Philadelphia Foundation. “We are proud to be the Museum’s partner in producing this special educational exhibit. The programming and materials that highlight Philadelphia’s place in history will benefit and be enjoyed by thousands of schoolchildren and families throughout the region.”

Hamilton Was Here’s Six Key Sections:
(Each section features a nearby location and its role in Hamilton’s story)

1. Hamilton’s Artillery: He Commanded It (Trenton and Princeton)
Do you have what it takes to be like Hamilton and command artillerymen? In 1776 and 1777, Hamilton captained a New York artillery company as part of General Washington’s army. In this section:

2. Hamilton’s First Duel: He Ended It (Port Richmond)
Alexander Hamilton took part in 11 “affairs of honor” during his lifetime. His first experience with dueling was right here in Philadelphia, in what is now the Port Richmond section of the city. Hamilton served as John Laurens’s second and negotiated an end to Laurens’s 1778 duel with Continental Army Major General Charles Lee. In this section:

3. Hamilton’s Constitution: He Argued for It (Independence Hall)
Alexander Hamilton served his country on the battlefield, but in 1782 he began serving his country as a member of Congress and later, in 1787, as a delegate to the Constitutional Convention. In this section:

4. Hamilton’s President: He Advised Him (The President’s House)
Experience Hamilton’s role in shaping and influencing the presidency, including his advice on how President Washington should manage his time and his public image. In this section:

5. Hamilton’s Economy: He Shaped It (First Bank of the United States)
As the first Secretary of the Treasury, Hamilton devised a series of economic plans that laid out how the new nation should manage its debt, create a national bank, establish a mint, and support American manufacturing. Within a replica of the façade of the First Bank of the United States, visitors will learn about Hamilton’s plans for the nation and their consequences. In this section:

6. Hamilton’s Army: He Led It (Market St.)
When western Pennsylvania farmers protested a national tax on whiskey in 1794, Hamilton wanted to stop them to show the power of the Federal Government and defend his vision for the Constitution. Here in Philadelphia, Hamilton and Washington made the decision to stop the Whiskey Rebellion with an army of militiamen. In this section:

At the conclusion of the experience, visitors are asked to reflect on how Philadelphia changed Hamilton and vote on Hamilton’s most important accomplishment in Philadelphia.

Each visitor to Hamilton Was Here: Rising Up in Revolutionary Philadelphia will receive a “Flat Hamilton” cut-out – inspired by Flat Stanley – to take home, as well as map of locations in the Philadelphia region where Hamilton made his mark. Visitors are encouraged to follow in Hamilton’s footsteps and snap a picture of Flat Hamilton at the various locations to share on social media with the hashtag #HamiltonWasHere.

Additional support for Hamilton Was Here was provided by John and Ellen Jumper, David and Kimberly Adler, John E. Herzog, The Alexander Hamilton Awareness Society, The 1830 Family Foundation, The Bergman Foundation, and The Snider Foundation.

About Bank of America
At Bank of America, we’re guided by a common purpose to help make financial lives better, through the power of every connection. We’re delivering on this through responsible growth with a focus on our environmental, social and governance (ESG) leadership. ESG is embedded across our eight lines of business and reflects how we help fuel the global economy, build trust and credibility, and represent a company that people want to work for, invest in and do business with. It’s demonstrated in the inclusive and supportive workplace we create for our employees, the responsible products and services we offer our clients, and the impact we make around the world in helping local economies thrive. An important part of this work is forming strong partnerships with nonprofits and advocacy groups, such as community, consumer and environmental organizations, to bring together our collective networks and expertise to achieve greater impact. Learn more at about.bankofamerica.com, and connect with us on Twitter at @BofA_News.

About The Philadelphia Foundation
Founded in 1918, The Philadelphia Foundation (TPF) strengthens the economic, social and civic vitality of Greater Philadelphia. TPF grows effective philanthropic investment, connects individuals and institutions across sectors and geography, and advances civic initiatives through partnerships and collaboration. A publicly supported foundation, TPF manages more than 900 charitable funds established by its donors and makes over 1,000 grants and scholarship awards each year. To learn more, visit www.philafound.org.