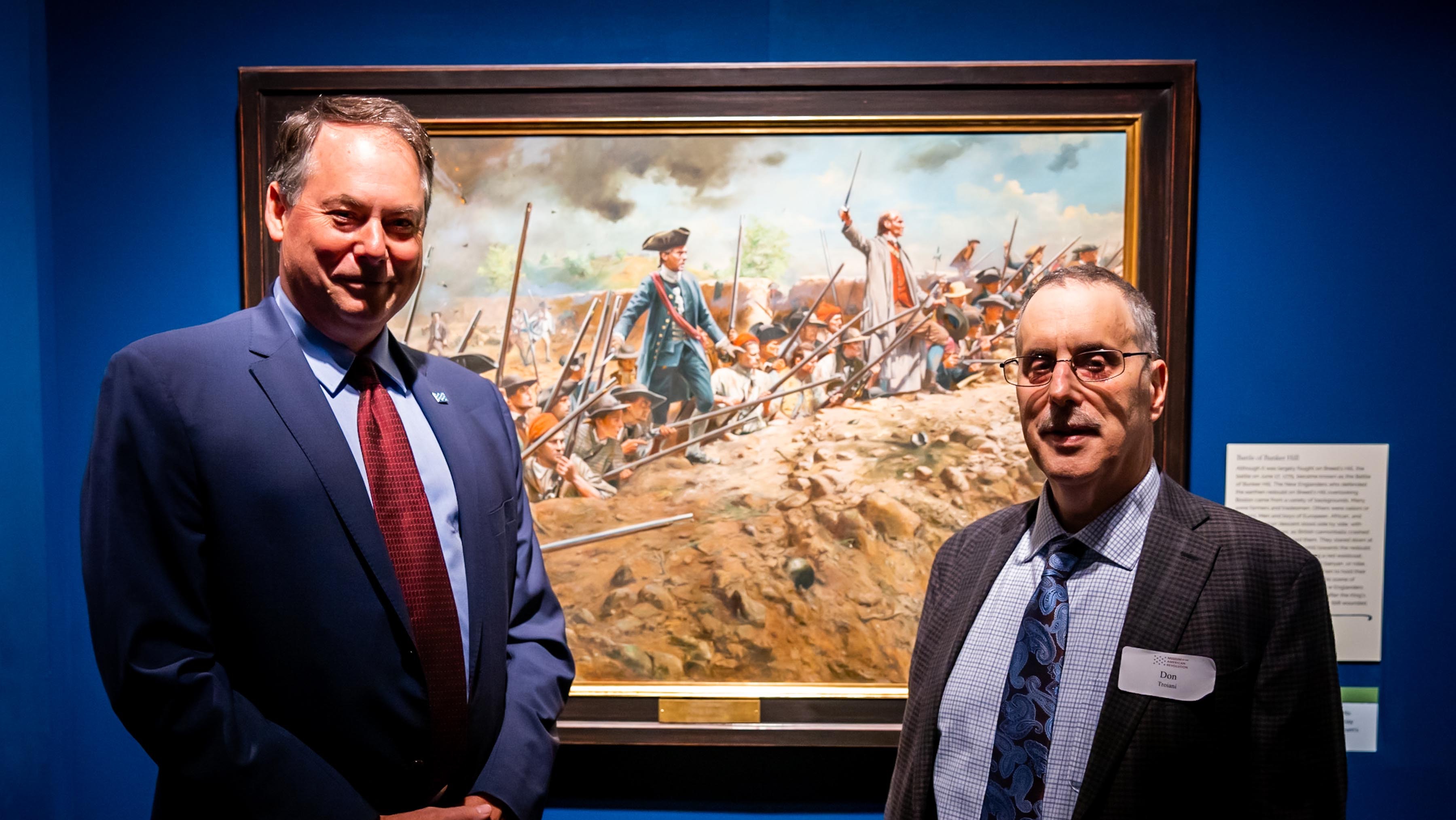 Join the Museum of the American Revolution for a special evening with nationally renowned historical artist Don Troiani on Tuesday, June 28, 2022, from 5:15 – 8 p.m. More than 45 original paintings by Troiani are currently on view in the Museum’s special exhibition Liberty: Don Troiani’s Paintings of the Revolutionary War. Beginning at 5:15 p.m., onsite guests can explore Liberty, followed by a conversation with Troiani that will also be broadcast live via Zoom.

Connecticut-based artist Don Troiani has dedicated much of his artistic career to imagining and recreating what the Revolutionary War truly looked like. His use of primary sources, archaeology, original artifacts, and other research methods imbues his paintings with an almost photographic-quality realism. Using a masterful combination of “artistry and accuracy” (The New York Times), Troiani’s paintings demonstrate his extraordinary combination of historical research, technical skill, and artistic drama. Liberty is the first major exhibition of his original artwork.

From 6 – 7 p.m., guests will enjoy a conversation with Troiani and Dr. R. Scott Stephenson, the Museum’s President and CEO, in the first-floor Lenfest Myer Theater. Troiani will reflect on his career, his artistic influences, and his unique process to research and paint scenes from the Revolutionary War. The discussion will be followed by a question-and-answer session with the onsite and online audiences. All registrants will receive access to this event’s recording to watch again.

Following the program, Troiani will be available to sign copies of the hardcover catalog that accompanies the exhibition, which is available in the Museum Shop onsite and online, and answer additional questions. Museum Members are invited to join a reception in Cross Keys Café from 7-8 p.m.

To explore Troiani’s work in advance, check out the Museum’s 360-degree virtual tour of Liberty, which is free accessible to anyone with an internet connection. Through high-resolution panoramic imagery, the virtual tour immerses viewers in Troiani’s original works of art alongside historic artifacts. The virtual tour features an accompanying audio guide to facilitate deeper dives into the exhibit’s highlights.

About Liberty: Don Troiani’s Paintings of the Revolutionary War
What did the Revolutionary War really look like? Nationally renowned historical artist Don Troiani aims to answer this question, drawing from painstaking research to create paintings that capture the drama and reality of life on the march, in camp, and in battle. More than 45 of Troiani’s original paintings and dozens of artifacts from his personal collection—most on display for the first time in public—plunge visitors into some of the most pivotal moments of America’s fight for independence, from the Battles of Lexington and Concord to the Siege of Yorktown. The exhibit runs through September 5, 2022, at the Museum of the American Revolution and is included with regular Museum admission.

About Don Troiani
Don Troiani is a traditional academic realist painter who is well known for his commitment to accuracy in his historical and military paintings, primarily of the Civil War and the Revolutionary War. He was born in New York City in 1949 and studied at the Pennsylvania Academy of Fine Arts and The Art Students League of New York between 1967 and 1971. Troiani owns one of the great private artifact study collections of Civil War, War of 1812, Revolutionary War, and World War II uniforms, equipage, insignia, and weapons, which he calls on to add the unique dimension of realism for which he has become renown. He is also an expert researcher with an expansive personal military library of over 3,000 volumes.

Troiani served as consultant on Civil War uniforms and equipage for the feature film “Cold Mountain” starring Nicole Kidman, Renee Zellweger, and Jude Law. He has been a military/historical advisor on “Civil War Journal” and the miniseries “The American Revolution” by A&E, and HISTORY channel’s “Missing Reward,” “Incurable Collector,” and “Hunt for Amazing Treasures.” His artifacts have been loaned for exhibition at the Smithsonian Institution, Delaware Historical Society, Connecticut Museum of History, The West Point Museum, Virginia Historical Society, and the National Park Service Visitor’s Center in Gettysburg, PA, among others. Troiani's artwork has appeared in many television productions on the A&E Military and Discovery channels, NBC, CNN, and FOX. The most recent use of his work is in the feature film “Night at the Museum: Secret of the Tomb.”