Treasured family heirlooms that once belonged to Alexander and Elizabeth Schuyler Hamilton are now on display at Philadelphia’s Museum of the American Revolution. They are on loan from Douglas Hamilton, the fifth great-grandson of Alexander Hamilton. 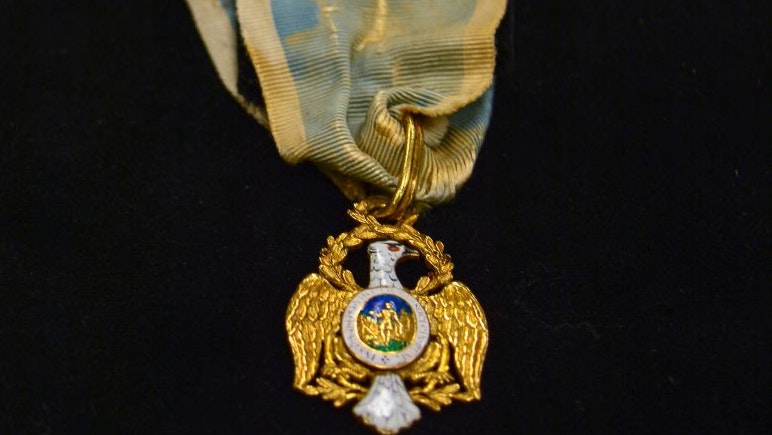 The rare artifacts – displayed for the first time in Philadelphia – include a Society of the Cincinnati Eagle insignia owned and worn by Hamilton and a gold mourning ring worn by his widow, Elizabeth Hamilton. Two never-before-displayed items, a handkerchief belonging to Elizabeth and embroidered with her name and a baby dress with an accompanying note saying that it was made by Elizabeth, are currently undergoing conservation and will go on display in early 2019.

“For me and my family, the Eagle insignia represents Hamilton’s service to his country,” said Douglas Hamilton. “The Society of the Cincinnati was created after the Revolutionary War so that people didn’t forget this ‘vast event’ – the war that was just fought against the empire of Great Britain. Putting the badge and other family treasures on display at a museum devoted to the American Revolution is a perfect match, and we’re very excited that the Museum is committed to helping us remember what they achieved.” 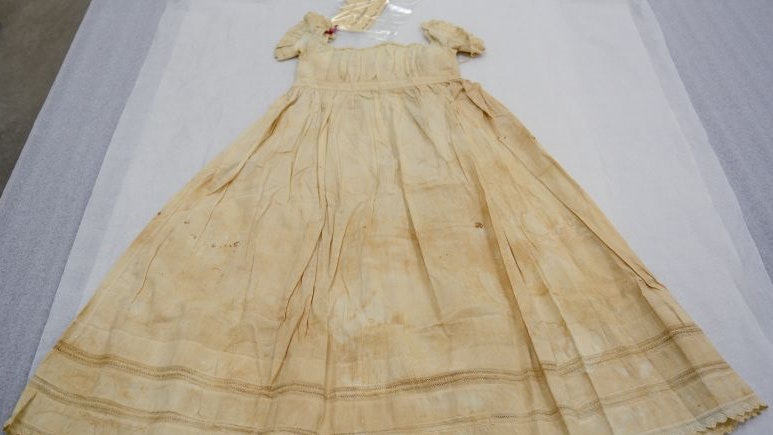 The displays are part of the Museum’s “Year of Hamilton,” which includes the hands-on exhibit Hamilton Was Here: Rising Up in Revolutionary Philadelphia, running through March 17, 2019. Approximately 30 artifacts related to Alexander and Elizabeth Hamilton will be on display in the Museum’s core exhibition throughout the year.

“These items give us a glimpse into the personal lives of Alexander and Elizabeth Hamilton, and we’re honored and delighted that Doug and his family have chosen to loan them to us,” said Dr. Philip Mead, Chief Historian and Director of Curatorial Affairs at the Museum. “Hamilton wore the Society of the Cincinnati Eagle insignia frequently as a proud icon of his Continental Army service.”

The mourning ring (circa 1804) was worn by Elizabeth Hamilton following the death of her husband of 23 years, when Aaron Burr mortally wounded Alexander Hamilton in their duel on July 11, 1804. Following a common practice of the 18th century, Elizabeth wore the mourning ring with a piece of her late-husband’s hair encased under the glass jewel. She lived for more than 50 years after Hamilton was killed, dying on Nov. 9, 1854, at the age of 97.

Hamilton was an original member of the Society of the Cincinnati, of which the eagle was the insignia. The organization was founded by officers of the Continental Army at the end of the Revolutionary War to preserve the memory of the American Revolution for all time. The pendant is displayed with the original ribbon, which is significantly worn from use, suggesting that Hamilton wore it frequently during his statesmanship in the early republic.

The Museum previously displayed the Diamond Eagle, the badge of office of the president general of the Society of the Cincinnati, owned and worn by Hamilton when he led the Society as its second president general—an office first held by Washington—until his death in 1804.

Other artifacts on display throughout the “Year of Hamilton” include:

The Museum’s hands-on exhibit Hamilton Was Here: Rising Up in Revolutionary Philadelphia highlights the connections between our own city and Hamilton’s extraordinary contributions to the nation’s founding. Through playful activities, scenic environments, and interactive games, visitors actively engage in the challenges of founding and maintaining a country as they follow Alexander Hamilton’s story through different locations in Philadelphia and the surrounding region. Each activity seeks to inspire visitors to think about Hamilton’s contributions to the founding of the United States and how they can carry these lessons forward as they face the challenges of citizenship today. It is free with regular Museum admission.