How Are You Fulfilling the Promise of the American Revolution? Tell Us! The Museum's Declaration of Independence Gallery explores what the "promise of equality" meant for all people.

During a weeklong Fourth of July Celebration from Saturday, June 27 – Saturday, July 4, the Museum of the American Revolution will offer free, interactive virtual experiences for all ages that explore the unfulfilled but enduring promise of the Declaration of Independence. Join us for virtual conversations with a range of dynamic guests, family-friendly activities, and the opportunity to declare how you are carrying forward the Declaration’s promises of liberty and equality.

In anticipation of the July 3rd Hamilton film release on Disney Plus, the Museum will share special Hamilton-inspired activities and host a lively conversation on July 1 with Yale University historian and Hamilton expert Dr. Joanne Freeman and actor and playwright Paul Oakley Stovall, who currently plays George Washington in the national tour of Hamilton: An American Musical, as they talk about the lure of America’s “$10 Founding Father” and his story’s relevance today. As part of the popular Read the Revolution series, Dr. Caitlin Fitz will explore the international impact of the Declaration of Independence in a virtual book talk on June 30.

As part of the Museum’s Meet the Revolution series, costumed historical interpreters Kalela Williams and Noah Lewis will talk about bringing African American experiences of the Revolution to life in their work on Saturday and Sunday, June 27–28.

“The Declaration of Independence offered the world a revolutionary statement about equality and the essential purpose of government,” said Dr. R. Scott Stephenson, Museum President and CEO. “As we celebrate American Independence and our many shining moments as a people, we must also remember that this founding vision of liberty remains an unfulfilled dream for many. The American Revolution lives on in all of us as we continue the hard work of protecting the rights of our fellow citizens.”

Throughout the week, virtual visitors can explore the Museum’s free, immersive Virtual Tour to learn the intimate – often unfamiliar – stories of the diverse range of ordinary people who powered the Revolution, and be inspired to think about continuities between the Revolutionary era and transformations in our own time.

On social media, share how you are fulfilling the promise of the Revolution. Will you exercise your rights by voting? Donate to a cause? Speak out against injustice? Be sure to tag @AmRevMuseum and #HowRevolutionary on Facebook, Instagram, and Twitter.

The Museum’s Fourth of July Week Celebration is Sponsored by Bank of America.

Virtual Offerings Throughout the Week Include: 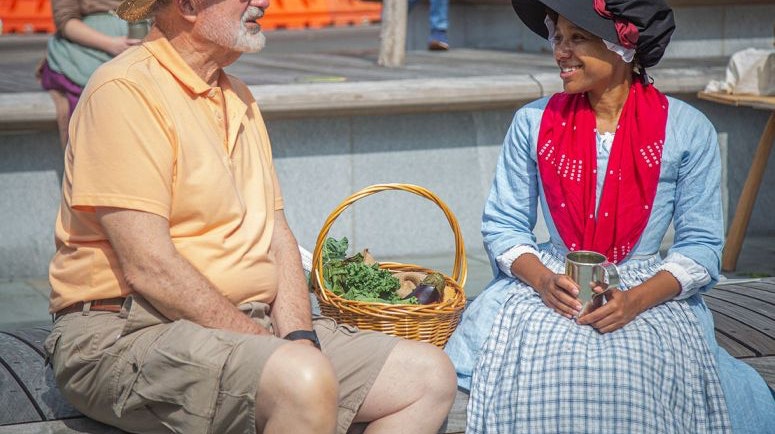 Kalela Williams talks with a visitor

As part of the Museum’s Meet the Revolution series, costumed historical interpreters Kalela Williams and Noah Lewis will talk about bringing African American experiences of the Revolution to life in their work. On Saturday, Lewis will show a clip of his portrayal of Edward “Ned” Hector, a free African American man and soldier who fought in the Revolutionary War, one of nearly 5,000 people of color who fought during the American Revolution, followed by a personal discussion about his experiences in the field. On Sunday, Williams will discuss the character she portrays – an African American teacher in Philadelphia in 1790s – and explore the challenges of developing a character based on scant historical material.

As part of the citywide virtual Wawa Welcome America festival, the Museum will be offering family-friendly at-home experiences via its website and social media channels. With our Family Scavenger Hunt, explore our virtual galleries to learn about the American Revolution and its ongoing relevance. Then find objects, documents, and works of art and add up your points to see where you rank! And test your knowledge of the Revolutionary era with a multiple-choice quiz. Our mini-lesson plan for the week will “Dissect the Declaration” to learn more about its very words and global legacy.

Join us virtually as author and historian Dr. Caitlin Fitz discusses her recent book, Our Sister Republics: The United States in an Age of American Revolutions (W.W. Norton, Liveright 2016), in conversation with Museum President and CEO Dr. R. Scott Stephenson. Fitz will draw on sources and archives in four languages to address how citizens of the new United States compared their Revolution and republicanism with Latin America’s independence movements. Fitz is an Associate Professor of History at Northwestern University. Registration is required here. 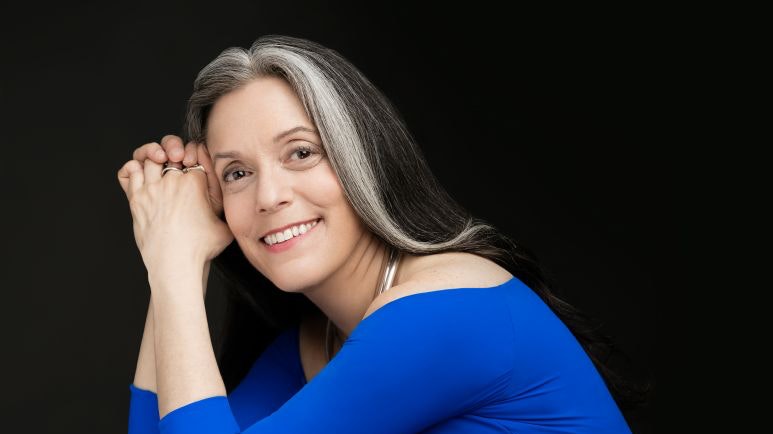 In anticipation of the July 3rd release of Hamilton on Disney Plus, tune into the Museum’s Facebook page at 10 a.m. for a conversation with Yale University historian and Hamilton expert Dr. Joanne Freeman and Chicago-based actor and playwright Paul Oakley Stovall, who currently portrays George Washington in the national tour of Hamilton: An American Musical, with Museum President and CEO Dr. R. Scott Stephenson. The wide-ranging conversation will cover everything from how they fell in love with Hamilton to their thoughts on the power of history and theater, and the role of monuments in historical memory. 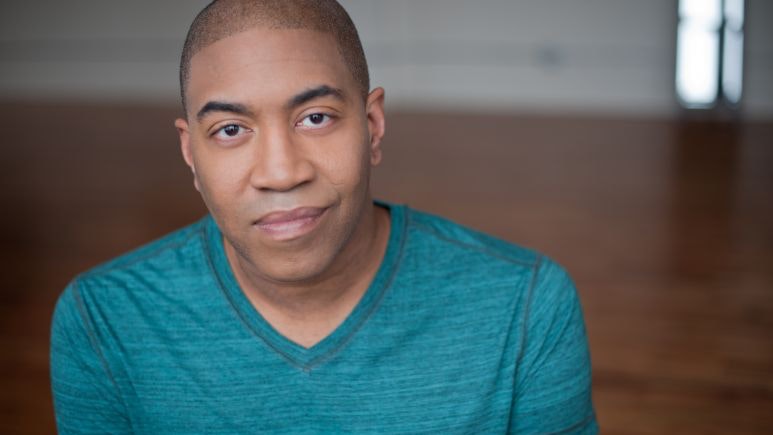 Event is free, but registration is required here.

As we approach July 4th, the holiday that commemorates the United States of America’s independence from Great Britain, three leading civic organizations in Philadelphia come together to discuss the importance of civil society—that “third sector,” distinct from government and business. What is the role of civil society in times of civil unrest? Do civic organizations have a deliberative role in peace building and conflict resolution? How can these organizations work to bring people together to not only have the hard conversations, but also commit to the often-harder act of listening? Join a virtual conversation with Dr. R. Scott Stephenson, the Museum's President & CEO; Ivan Henderson, Vice President of Programming of the African American Museum in Philadelphia; and Craig Snyder, President and CEO of the World Affairs Council of Philadelphia.

Did you know that only one in three American citizens would be able to pass the Naturalization test that is required for U.S. citizenship, according to a recent survey? Test your knowledge of American history and government with our Citizenship Quiz, inspired by our Citizenship Initiative, which uses the Museum’s galleries to prepare Philadelphia-area immigrants for citizenship.

On July 3, tune into Disney Plus for the premiere of Hamilton, a film adaptation of the Broadway smash hit musical. Follow along on Twitter as our curators and historians share historical commentary on the film. The Museum will also be sharing Hamilton-related activities on its website and social channels, including a dress-up Eliza Hamilton paper doll activity, Hamilton-inspired coloring pages, and a virtual “walking tour” that explores the city of Philadelphia when Hamilton called it home.

Dig deeper with a blog post about whether the Declaration of Independence is relevant today and what the “promise” of the American Revolution means.

About Dr. Joanne B. Freeman

Dr. Joanne B. Freeman, Class of 1954 Professor of History and American Studies at Yale University, is a leading scholar of early American politics, political culture and violence, and a leading authority on Alexander Hamilton and his world. She is the author of Affairs of Honor: National Politics in the New Republic; editor of Alexander Hamilton: Writings and The Essential Hamilton; and co-editor of Jeffersonian Republicans in Power, 1800-1824. Her most recent book, The Field of Blood: Violence in Congress and the Road to Civil War was a New York Times notable book of 2018 and a finalist for the Gilder Lehrman Lincoln Prize. Her next book, Hunting for Hamilton, is an introduction to the fun and challenges of getting to know Hamilton. Freeman was the lead historian for the National Park Service’s reinterpretation of Hamilton's home, the Grange, as well as for Hamilton: The Exhibition, which opened in Chicago in April 2019. She is co-host of the popular American history podcast BackStory and the host of History Matters (NCHE.net/conversations), a weekly conversation about history’s hold on the present. She can be found online at joannebfreeman.com and on Twitter at @jbf1755.

Paul Oakley Stovall is an actor, playwright, and activist, who currently plays the role of George Washington in the first national tour of Lin Manuel Miranda’s Tony-winning hit musical Hamilton: An American Musical. His play Immediate Family was featured at the Goodman Theatre. His musical Clear was chosen for the Eugene O’Neill National Playwrights/Music Theatre Conference and his play The Hunted (co-written with Evan Linder) was a 2017 Finalist. As an actor, he has appeared off-Broadway in Tony-winner Mary Zimmerman’s Notebooks of Leonardo da Vinci and at Lincoln Center in the world premiere of Dessa Rose. National tours include RENT and Once on This Island, and he starred in the world premiere of Seito Ren-San’s Otonari No Dasso Hei in Tokyo. Film credits include Robert Altman’s The Company and John Cameron Mitchell’s Shortbus. Television credits include Empire (Fox), Chicago Fire (NBC), Shameless and The Chi (Showtime). He also was a staff writer on Survivor’s Remorse (STARZ). Stovall spent six years as an advance staff lead and media logistics coordinator for First Lady Michelle Obama, after spending a year as a Press Lead for President Obama.