This Columbus Day weekend, the Museum of the American Revolution will host an Indigenous Peoples Celebration from Thursday, Oct. 4 – Monday, Oct. 8, 2018, in partnership with the Oneida Indian Nation. The celebration of indigenous peoples and cultures will include performances by Oneida Indian Nation dancers, demonstrations by native craftspeople, and an evening panel discussion. 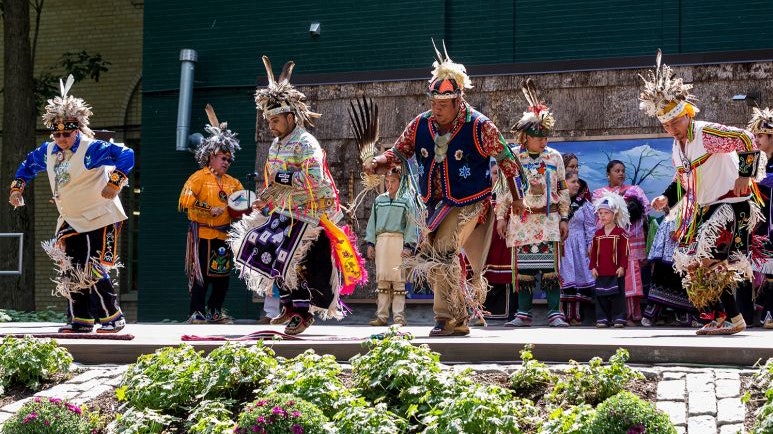 On Thursday, Oct. 4 at 6 p.m., the Museum will kick off the weekend with a panel discussion about contemporary debates over historical memory, entitled “Honoring and Remembering: Can We Memorialize Historical Figures Without Glorifying Atrocities?”

The panel will explore whether a moral society can at once honor the positive accomplishments of historical figures while also accurately recounting the negative consequences of their actions, as well as how we can lift up other stories that have often gone untold.

Panelists include Kevin Gover, Director of the National Museum of the American Indian; Ray Halbritter, Oneida Indian Nation Representative, Nation Enterprises CEO and a Museum Board Member; Rosalyn J. McPherson, president of The ROZ Group, which managed community relations and oversaw historical content for The President’s House Project in Philadelphia, among others; and Dr. Eric Shed, lecturer on education and co-director of the Harvard Teacher Fellows Program, whose work with teachers includes exploring how to challenge the popular Columbus narratives. It will be moderated by KYW Newsradio's Cherri Gregg. 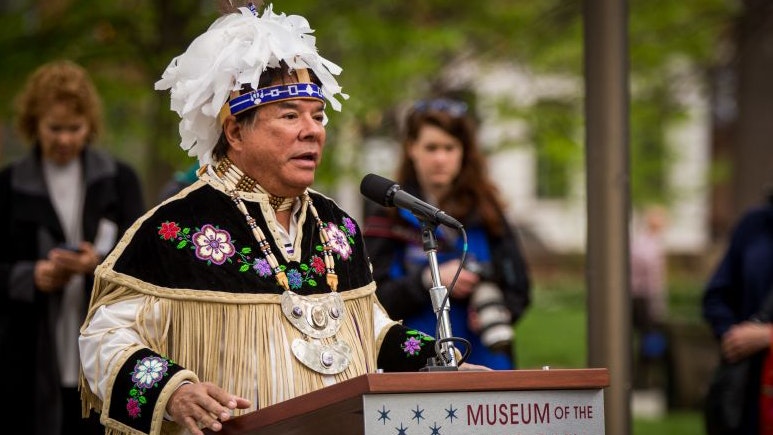 “The Museum of the American Revolution is the perfect setting for this important conversation, considering its renowned work providing a nuanced and inclusive record of the country’s founding,” said Halbritter. “As the country prepares to recognize Columbus Day, it is important to explore how we can remember historical figures accurately and appropriately. This conversation goes well beyond the nation’s founding and has recently included debates about monuments to Confederate military icons and other memorials.”

Tickets to the panel discussion are $20 for general admission, $15 for Museum members and $10 students (must show ID on site) and can be purchased here. Tickets include exhibit access from 5 - 6 p.m. (The 25-minute film "People of the Standing Stone" will be screened at 5 p.m.).

On Saturday, Oct. 6, at 10:30 a.m. - 12:30 p.m. in the Museum’s first-floor Rotunda, Michael Galban, curator for the Seneca Art & Culture Center at Ganondagan State Historic Site in Victor, NY, will discuss how we can best use objects to tell the stories of the past. Galban will bring Native American objects that become gateways to a deeper discussion of the period of the American Revolution.

From 2 – 3 p.m. in Liberty Hall, Galban will give a behind-the-scenes look at creating the “look” of the lifelike figures in the Oneida Nation Theater, including the careful production and reproduction of the clothing, accoutrements, and physical appearances of the figures. 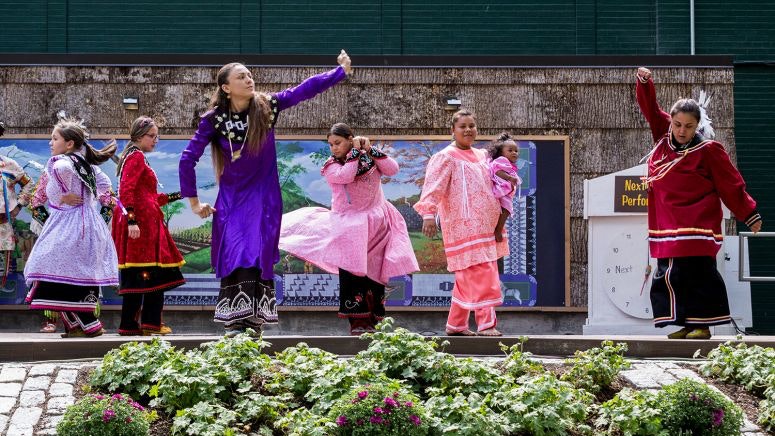 On Monday, Oct. 8 at 11 a.m., 1 p.m. and 3 p.m., dancers from the Oneida Indian Nation will perform traditional Haudenosaunee social dances, incorporating drumbeats and chants, in authentic dress on the Museum’s outdoor plaza. It is free and open to the public.

In the Museum’s exhibits, visitors can explore the personal stories of the diverse range of individuals who were part of establishing our nation, including women, native people, and free and enslaved people of African descent. In an immersive multimedia gallery, visitors will expand their understanding of the “founding generation” as they listen as members of the Oneida Indian Nation debate whether to support the Revolutionary cause. Throughout the weekend, educators in Revolution Place, the Museum’s new discovery center, will lead hands-on art activities and storytelling about Philadelphia’s multicultural roots. 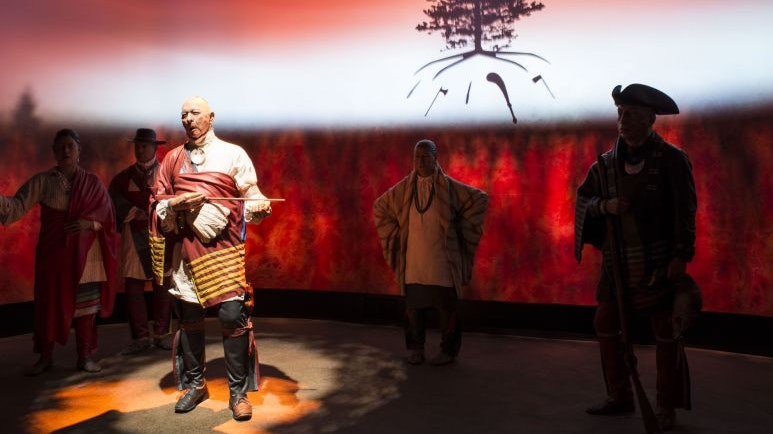 Every day at 3:30 p.m., the Museum presents “People of the Standing Stone,” a 25-minute film narrated by Academy Award-winner Kevin Costner and directed by award-winning documentarian Ric Burns, in the Museum’s Lenfest-Myer Theater. The documentary traces the history of the Oneida Nation during and after the Revolutionary War.

About Kevin Gover
Kevin Gover is the director of the Smithsonian’s National Museum of the American Indian and a citizen of the Pawnee Tribe of Oklahoma. Gover served as the Assistant Secretary for Indian Affairs in the U.S. Department of the Interior from 1997 to 2000 under President Bill Clinton where he won praise for his efforts to rebuild long-neglected Indian schools and expand tribal and Bureau of Indian Affairs police forces throughout the country. His tenure as Assistant Secretary is perhaps best-known for his apology to Native American people for the historical conduct of the Bureau of Indian Affairs. After leaving office in 2000, Gover practiced law at Steptoe & Johnson LLP in Washington. In 2003, he joined the faculty at the Sandra Day O’Connor College of Law at Arizona State University and served on the faculty of the university’s Indian Legal Program, one of the largest such programs in the country.

About Rosalyn J. McPherson
Rosalyn McPherson is President and Founder of The ROZ Group, which provides strategic marketing and communications, fundraising consulting, project management, and product development to corporations, governmental agencies, and non-profit institutions. Healthcare, social services, education, healthcare disparities, science and history are among her key areas. The firm is known for facilitating strategic planning dialogs and public discourse. Prior to launching her firm more than 10 years ago, McPherson served as Senior Vice President for the Science Center at the Franklin Institute. In this role she had day-to-day responsibility for increasing attendance and managing the visitor experience aspects of the museum’s operation that included exhibit development, retail, IMAX theater, and the Fels Planetarium. Most recently, McPherson served as President & CEO of the Urban League of Philadelphia.

About Eric Shed
Eric H. Shed is lecturer on education and co-director of the Harvard Teacher Fellows Program. Prior to coming to HGSE, Shed was the director of secondary history/social studies education at Brown University. He received his Ph.D. in Curriculum and Teacher Education from Stanford University, and has also served as a methods instructor at New York University, and with the Stanford Teacher Education Program (STEP). His work as a teacher educator has been greatly informed by eight years of experience as a high school social studies teacher in three distinct types of urban schools: a small alternative high school, a large comprehensive high school, and an early college magnet school. From the Bronx to Harvard University, Shed's passion for helping struggling students become critical thinkers has been the driving force in his fifteen-year career as teacher and teacher educator.

About Cherri Gregg
Cherri Gregg reports on a variety of public affairs and social justice related issues, producing news reports, podcasts and other materials for KYW Radio, CBS-3 TV and CBSPhilly.com. She is also a licensed attorney. In 2013, she launched an original 10-day Black History Month series for KYW Newsradio, titled, “Philadelphia GameChangers.” The series highlighted individuals and organizations making a positive impact in the African-American Community. Gregg was named one of The Philadelphia Tribune’s Most Influential Leaders in 2015, one of the Philadelphia NAACP’s Most Influential Black Women and PABJ’s Journalist of the Year in 2013. Gregg has a B.S. from Boston University, a J.D. from Howard University School of Law and a M.J. from Temple University’s College of Communications and Theater. She has served as president of the Philadelphia Association of Black Journalists and is a member of the Pennsylvania and Georgia Bars.