Philadelphia, PA, May 20, 2016 — As the new Museum of the American Revolution rises on the corner of 3rd and Chestnut Streets, it marks a new phase in the transformation of a site that has a history as long as the city itself. A team of archaeologists uncovered much of that history during excavations prior to construction of the building, revealing how the site has changed since the 17th century.

“It seems only fitting that such a complete story of the evolution of the city should be found on the site of a future museum,” said Michael Quinn, president and CEO of the Museum of the American Revolution. “These artifacts provide a tangible tie to Philadelphia’s past and help us tell the stories of people who lived right here before, during, and after the Revolutionary War.” 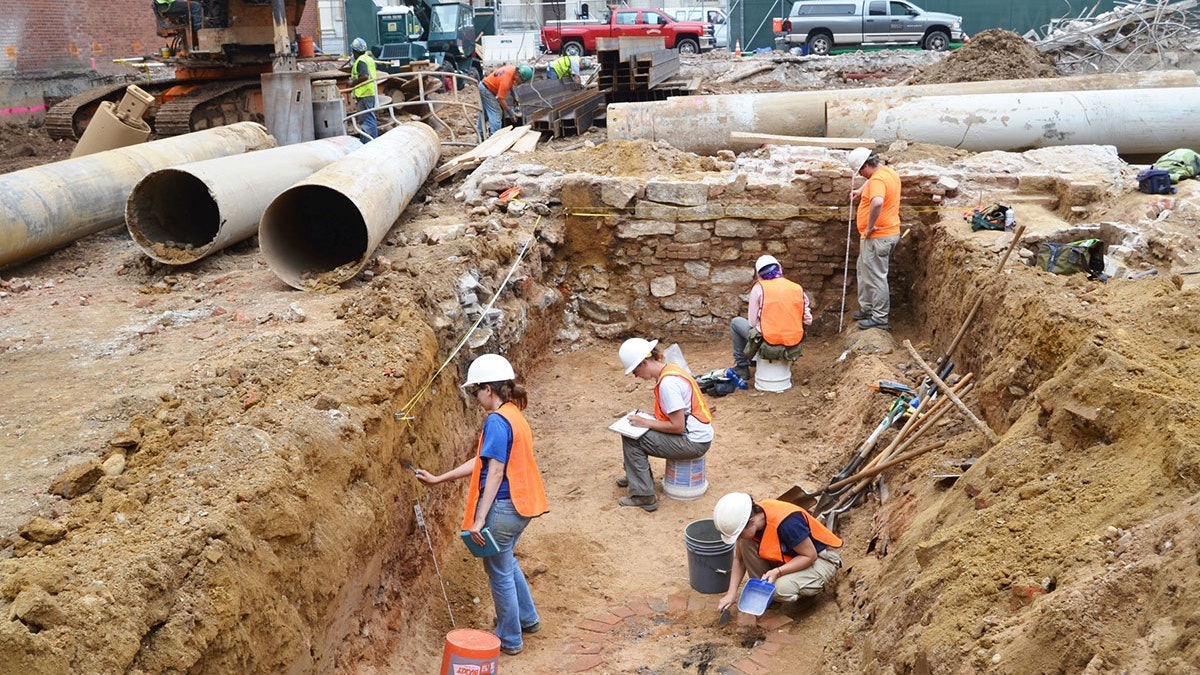 Archaeologists from John Milner Associates (now Commonwealth Heritage Group, Inc.) conducted fieldwork at the site, which covers a full quarter of a city block, from July through October 2014 and briefly in April 2015 and May 2016, uncovering a record of occupation from the earliest settlement of Philadelphia through the mid-20th century.

A total of 82,000 artifact pieces were found, most of them coming from brick-lined privy and well shafts that were sealed beneath a later generation of 19th-century buildings that had been taken down when the first Visitor’s Center for Independence Park was built on the site in the 1970s. The team is compiling an interpretive report which combines an analysis of the artifacts with the history of the site. A blog about the excavation is available here.

“Cities are constantly rebuilding themselves, and the construction of this new museum – right in the heart of the oldest part of Philadelphia – provided us with a rare opportunity to examine the things left behind by the people who lived and worked there, in order to learn about how the city began and how it changed,” said lead archaeologist Rebecca Yamin, PhD. “This buried record of the past touches on many significant changes in the city’s development, essentially creating a microcosm of Philadelphia from its very beginning to the present.”

The artifacts, some of which will be on display in the new Museum, tell the story of the site’s transformation from primarily private households in the 17th century to the commercial thoroughfare of today. One of the largest assemblages of artifacts comes from what appears to be a mid-18th century tavern on Chestnut Street and included many red earthenwares made by identifiable local potters.

Another assemblage, this one associated with an unlicensed tavern on Carter’s Alley, included one of the most treasured findings: the shattered pieces of an English delftware punch bowl. The bowl (now painstakingly re-assembled) features a picture of the brigantine ship Tryphena on it. The Tryphena sailed between Liverpool and Philadelphia and, in 1765, carried a petition from the merchants of Philadelphia asking their counterparts in Great Britain to reconsider the Stamp Act, one of the major grievances that started the rift between the colonists and the mother country.

Recovered print type provides insight into the late 18th-early 19th century print shops located along Carter’s Alley (likely the birthplace of the Philadelphia Inquirer) while massive granite foundations found along Chestnut Street are all that is left of the city’s first “skyscraper” which housed Dr. David Jayne’s patent medicine business. Hundreds of shell fragments from the manufacture of buttons are evidence of George Lippincott’s button factory, which thrived on the site from 1913 until World War II.

With these finds, the archaeologists and historians were able to reconstruct a more detailed picture of the transformation of this section of Philadelphia over nearly 300 years.

The Museum of the American Revolution, under construction now in Philadelphia, with an opening date of spring 2017, will explore the complete story of the American Revolution using its distinguished collection of objects, artifacts, artwork, and manuscripts. Located just steps away from Independence Hall, Carpenters’ Hall, Franklin Court, and the Tomb of the Unknown Soldier of the Revolution, the Museum will serve as a portal to the region’s many Revolutionary sites, sparking interest, providing context and encouraging exploration. Permanent and special exhibition galleries, theaters, and large-scale tableaux will bring to life the original “greatest generation,” and engage people in the history and continuing relevance of the American Revolution. The Museum is a private, non-profit organization. For more information, visit www.amrevmuseum.org or call toll free, 877-740-1776.