PHILADELPHIA, Feb. 7, 2017 — A restored mid-19th-century copy of a painting depicting George Washington and French general Rochambeau during the last major battle of America’s Revolutionary War has been installed at the Museum of the American Revolution. The painting will be prominently displayed when the Museum opens to the public on April 19. 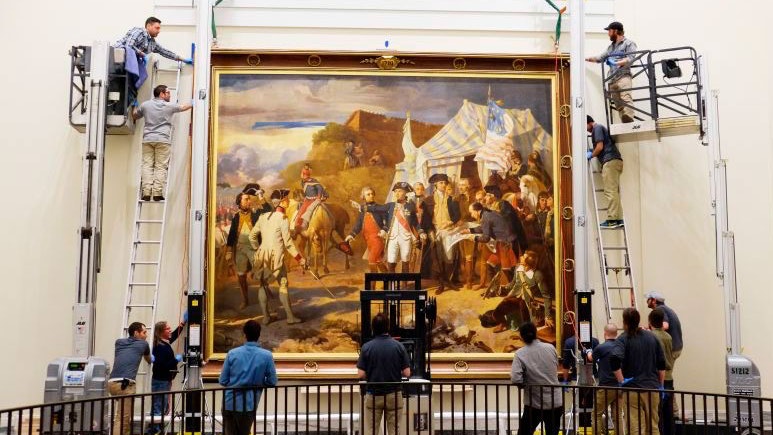 The exceptionally large painting, measuring 14-by-17 feet (16-by-19 framed), is a hand-painted copy of French artist Louis Charles-Auguste Couder’s Siege of Yorktown (1781). It hangs in the Museum’s second floor court and can be seen from the first floor, drawing visitors up the grand staircase as they begin the Museum experience.

The original 1836 Couder painting hangs in the Hall of the Battles in the Palace of Versailles. It was commissioned as part of a series of works commemorating the great moments of France’s military history. The Museum’s copy is believed to have been painted by French artist Henry LeGrand and exhibited in 1860 at the Chicago Art Union.

The painting depicts Washington and Rochambeau giving orders at Yorktown, Virginia. Rochambeau played a major role in helping the Continental Army win the war. The two men stand in front of a marquee tent much like George Washington’s Headquarters Tent, one of the most iconic surviving artifacts of the Revolution, which also is featured in the Museum.

“Since the 1830s, millions of people have seen Couder’s original painting on display at Versailles, and it has become such an important and memorable depiction of France’s role in securing American independence,” said Dr. R. Scott Stephenson, Vice President of Collections, Exhibitions, and Programming for the Museum of the American Revolution. “France and the United States have been allies since the very beginning of our nation’s history, and this painting represents the long and reciprocal relationship between our great nations.”

Three notable New York firms contributed to the conservation, stretching, and framing of the LeGrand canvas. The painting was conserved by Lowy Frame and Restoring Company, a leading fine arts services firm established in 1907. Prior to install, the canvas was stretched, minimally inpainted, and varnished on site by Amy Sokoloff and John Powell of Chelsea Restoration Associates, a widely respected painting restoration studio. Gill & Lagodich, an acclaimed antique frame gallery, custom-built the elegant frame, based on a 19th-century American example from their extensive collection. The National Society Daughters of the American Revolution (DAR) provided a substantial grant to underwrite the majority of painting conservation, framing, and installation.

On the flanking walls, two late-19th-century paintings by Harrington Fitzgerald, a Philadelphia newspaper editor and writer who took up painting and is believed to have studied with Thomas Eakins, also were hung this week. “The Foraging Party,” depicts Washington and his troops at Valley Forge, and the facing canvas portrays “Washington Crossing the Delaware.”

The two Fitzgerald paintings, which each measure about 12 feet across, were conserved by a team of faculty and students from the University of Delaware.

New York’s Gill & Lagodich Fine Period Frames & Restoration, the preeminent framer of American paintings for museums, designed and custom-built the mahogany and gold frames for all three paintings, as well as underwriting part of the cost to the Museum.

“We chose exemplary mid-19th century American frame models that could be scaled up to surround the oversized Revolutionary scenes,” said Simeon Lagodich, co-owner of Gill & Lagodich Fine Period Frames. “We adapted historic frames by creating them in mahogany with gilded ornaments, suited to both the humbler aspects of battle as well as representing the theme of victory with gilded laurel wreathes encircling the ‘Battle of Yorktown’.”

“We also adapted cartouches from the more ornate frame surrounding the original Couder painting at Versailles,” added co-owner Tracy Gill. “The Versailles frame has hand-carved and gilded placques at top and bottom with hand-lettered title information. Though our overall frame design is decidedly American, we wanted some older French details to resonate with visitors, to visually represent the significance of international cooperation in this pivotal battle scene and establishment of a New Republic.”

Distinguished Philadelphia-based firm, Atelier Art Services, was chosen to handle the complex installation of these three-oversized works. Atelier Art Services is a trusted provider of fine art services, having handled such important art moves as Thomas Eakins’ Gross Clinic and the relocation and reinstallation of the Barnes Foundation Collection from Merion to the new campus on the Benjamin Franklin Parkway.

The Museum of the American Revolution, which opens in the heart of historic Philadelphia on April 19, 2017, will explore the dynamic story of the American Revolution using its rich collection of Revolutionary-era weapons, personal items, letters, diaries, and works of art. Immersive galleries, theater experiences, and recreated historical environments will bring to life the events, people, and ideals of our nation’s founding and engage people in the history and continuing relevance of the American Revolution. Located just steps away from Independence Hall, Carpenters’ Hall, and Franklin Court, the Museum will serve as a portal to the region’s many Revolutionary sites, sparking interest, providing context, and encouraging exploration. The Museum is a private, non-profit, and non-partisan organization. For more information, visit www.AmRevMuseum.org or call 877.740.1776.