Create Your Own Illumination-Inspired Craft to Take Home, Beginning Dec. 2

PHILADELPHIA, NOV. 27, 2017 — This holiday season, the Museum of the American Revolution is reviving a traditional 18th century form of celebration: colorful window illuminations inspired by famed Philadelphia artist Charles Willson Peale. The window illuminations, “Illuminating Liberty,” are now on display nightly through the New Year. Each weekend in December from 11 a.m. - 3 p.m., kids can create their own illumination-inspired ornament to take home. 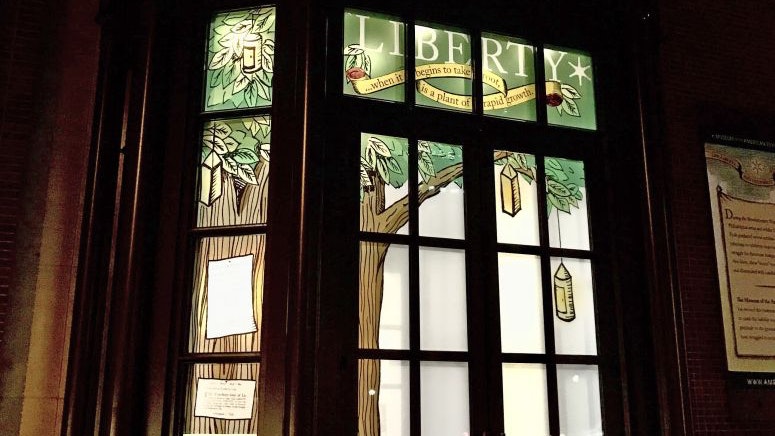 During the Revolutionary War, Peale produced several exhibitions of transparent paintings to celebrate important moments in the struggle for American Independence. Painted on thin fabric or glass, these scenes were placed in windows and illuminated with candlelight from behind. Similarly, the Museum has installed colorful window clings along its Third Street and Chestnut Street windows, which will be lit from within each night.

The Museum will officially debut “Illuminating Liberty” on Thursday, November 30, 2017, from 5 - 7 p.m., as part of Old City District’s Historic Holiday Nights. That evening, the Museum’s Cross Keys Café will host a Hot Chocolate Happy Hour, offering seasonal treats for purchase including Shane’s Hot Cocoa and hot seasonal cocktails, and the Museum’s gift shop will be open for holiday shopping. The Nov. 30 event is FREE (no exhibit access).

The Museum’s illuminations depict iconic Revolutionary imagery, including Boston’s Liberty Tree and the Chain of States, expressing gratitude to the generations of Americans who have struggled to secure and defend our liberty.

Beginning Saturday, Dec. 2, guests can learn more about Peale, his military service, and his fascinating illuminations at a “discovery cart” in the Museum’s first-floor rotunda from 11 a.m. – 3 p.m. through the end of the year and every day from 11 a.m. - 4 p.m. from Dec. 24 - 30.