PHILADELPHIA, DEC. 4, 2017 — A remarkable assemblage of 18th-century slipware ceramics uncovered during an archaeological excavation in Philadelphia will be revealed to the public for the first time. Nearly a dozen pieces of slipware, a form of decorative lead-glazed pottery, will be on view at the 2018 New York Ceramics & Glass Fair from Thursday, Jan. 18 – Sunday, Jan. 21, 2018, at Bohemian National Hall in Manhattan. 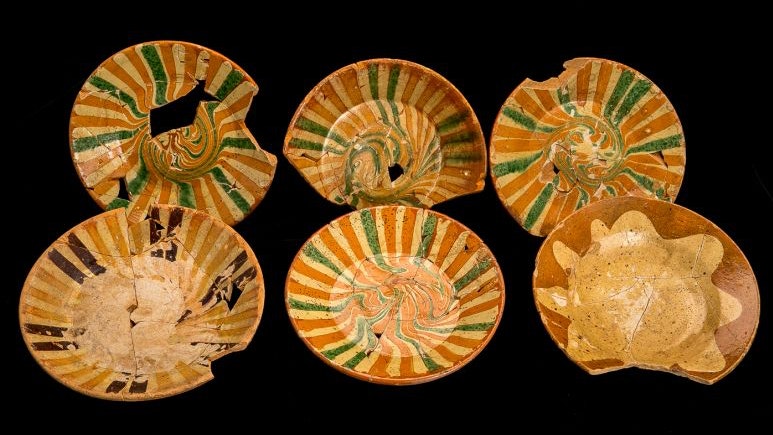 The slipware was uncovered during excavations on the site of the new Museum of the American Revolution in Philadelphia, during which archaeologists from Commonwealth Heritage Group recovered nearly 85,000 artifacts. Among these was a group of slipware ceramics, including large dishes and other items, distinguished by vivid abstract patterns created using a specialized skill known as “slip trailing,” which involves pouring liquid clay onto an object.

The pieces were discovered in a brick-lined privy shaft associated with one or more taverns. Researches believe that although the pieces primarily had display value, they may have been used for serving as well. Current research suggests that these previously undocumented slipwares were made in Philadelphia by one or more French or German potters operating within the confines of the historic Old City district.

“We’ve seen hints of this type of slipware before but nothing that has this degree of intactness and comprehensiveness as far as the patterns exhibited here,” said Robert Hunter, editor of the annual journal Ceramics in America, an author, and archaeologist. “Nothing else has been this complete. By virtue of that intactness, we have been able to make great bounds in what we can learn from them about who made them and how they were used.”

A lecture by archaeologist Deborah Miller, Senior Materials Specialist for AECOM in Burlington, New Jersey, will discuss the significance of the discovery in light of its contribution to Philadelphia’s ceramic history at the 2018 New York Ceramics & Glass Fair on Thursday, Jan. 18 at 2 p.m.

“The site of the Museum of the American Revolution is the gift that keeps on giving,” said Hunter. “There is no question that it has been an extremely rich deposit of 18th-century material culture. And we’ve only scratched the surface – I believe it will be many years before we fully realize the research potential from the materials from the site.” 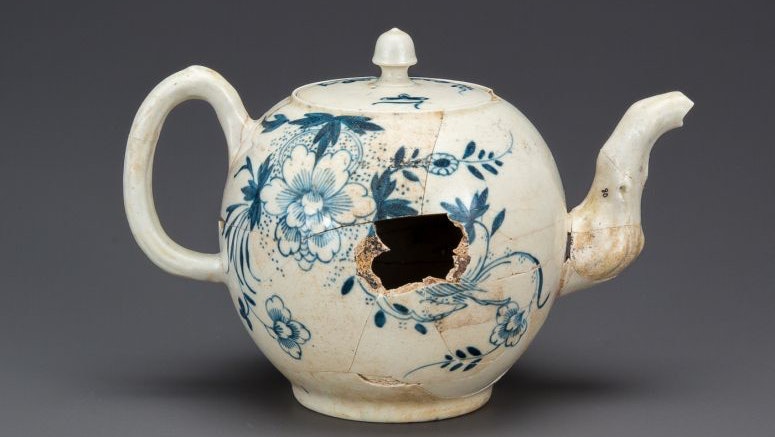 In addition to the slipware, a newly analyzed decorated porcelain teapot will be on display. The teapot was discovered to be only the second-known example of American-made hard-paste porcelain. The first example was the ‘Holy Grail’ bowl exhibited last year. Historical research by Hunter and Miller has now suggested that this porcelain was being made in the circa 1765-1768 period, earlier than the previously known Bonnin and Morris porcelain Factory which opened in 1770. This new discovery changes the complexion of the history of porcelain making both in Philadelphia and the larger American context. The findings will be discussed in depth in an upcoming article in Ceramics in America.

“What is so exciting about this discovery is that it is a reminder of the importance of archaeology in colonial urban sites like Philadelphia,” said Dr. R. Scott Stephenson, Vice President of Collections, Exhibitions, and Programming at the Museum of the American Revolution. “The materials recovered on these sites require years of research to fully appreciate, and so these treasures from the Museum site will continue to provide new insight into Revolutionary America.”

Archaeologists from Commonwealth Heritage Group, Inc. conducted fieldwork at the site of the new Museum of the American Revolution from July through October 2014 and briefly in April 2015 and May 2016, uncovering a record of occupation from the earliest settlement of Philadelphia through the mid-20th century. Most of the artifacts were found in brick-lined privy and well shafts. The features contained an enormous quantity of of ceramics, including locally made Philadelphia objects and imported English, German, and Chinese wares, among other artifacts. More information here.