Now on view just in time for Hanukkah, the Museum has installed a case with artifacts related to Barnard and Michael Gratz to explore American Jewish life in Revolutionary-era Philadelphia.

During the Revolution, Philadelphia was the center of American Jewish life, and brothers Barnard and Michael Gratz were at the heart of the city's Jewish community. When they arrived, one after the other, in the 1750s, the city’s Jewish community was small and scattered. Through their business and personal connections, they brought the Jewish community closer together, supporting the Mikveh Israel congregation and building its first synagogue in Philadelphia. The brothers publicly protested British taxation in the 1760s, signing the 1765 non-importation agreement. During the Revolutionary War they supplied the Continental Army. The Gratz brothers were a powerful team who helped establish America and expanded the possibilities for American Jews within the new nation.

The new display includes items associated with the Gratz family including portraits of Barnard and Michael Gratz, as well as a traveling ark used by Joseph Simon, an early Jewish resident of Lancaster, Pennsylvania, and later Michael Gratz’s father-in-law. Also featured in the display is a collection of state constitutions reviewed by Barnard Gratz and a small group of Jewish leaders to identify which states allowed and which prohibited American Jews from serving in elected office. 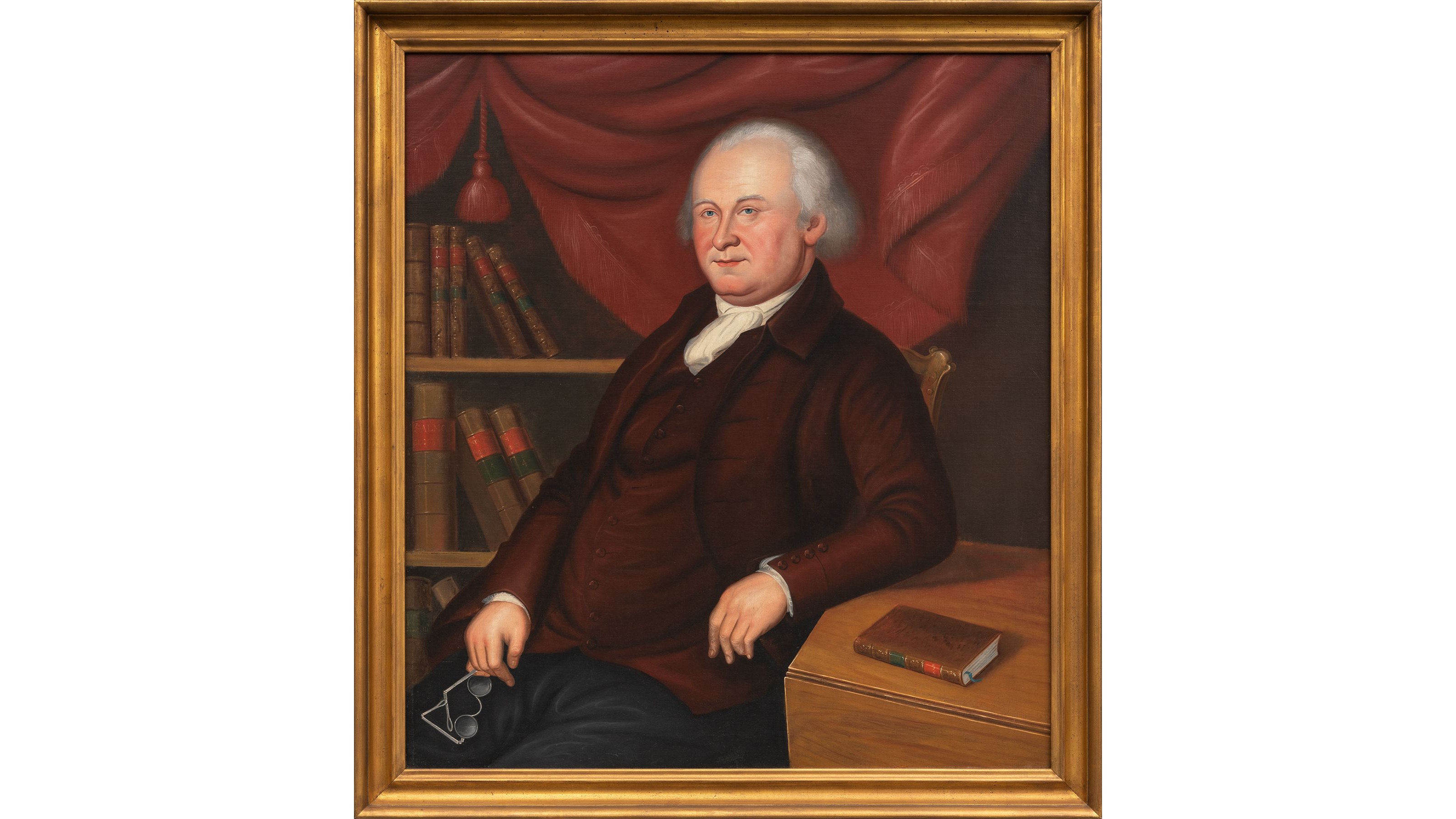 By the time Barnard Gratz (1738-1801) sat for his portrait painted by Charles Peale Polk circa 1792, he had been in America for almost 40 years. The first of the brothers to arrive, Barnard laid the foundation for the Gratzes’ commercial success. Barnard used that success to solidify the Philadelphia area’s Jewish congregation, support the American Revolution, and expand political rights for American Jews in the new nation.

Michael Gratz arrived in Philadelphia in 1759, barely 20 years old. Following in his brother’s footsteps, he took a position with the same Philadelphia merchant Barnard had worked with, David Franks. Michael married Miriam Simon, Joseph Simon’s daughter, bringing the Jewish communities of Philadelphia and Lancaster, Pennsylvania, closer together. It was Michael and Miriam’s children who continued the Gratz family business well into the 1800s.

More on the Gratz Family

Learn about Rebecca Gratz, one of Michael and Miriam's daughters, in the Museum's When Women Lost the Vote virtual exhibit. See Content

The Constitutions of the Several Independent States of America

Barnard Gratz was among a small group of Jewish leaders who reviewed this collection of state constitutions identifying which states allowed and which prohibited American Jews from serving in elected office. The committee, possibly Barnard himself, annotated the book with their findings. The committee used their findings to petition Pennsylvania to change the requirement that candidates for the General Assembly be Christian. Pennsylvania tabled the petition but dropped the requirement when they adopted a new constitution in 1790.

Joseph Simon owned what might have been the first Torah set in Pennsylvania, which included miniature Torah scrolls and this Torah Ark to store it in. Before the Gratzes arrived, Simon was at the center of Jewish life in the Mid-Atlantic region. American Jews from the region traveled to Simon’s home in Lancaster, Pennsylvania, to worship with the Torah. Michael Gratz was often among those who visited Simon. Michael married Simon’s oldest daughter, Miriam, in 1769. 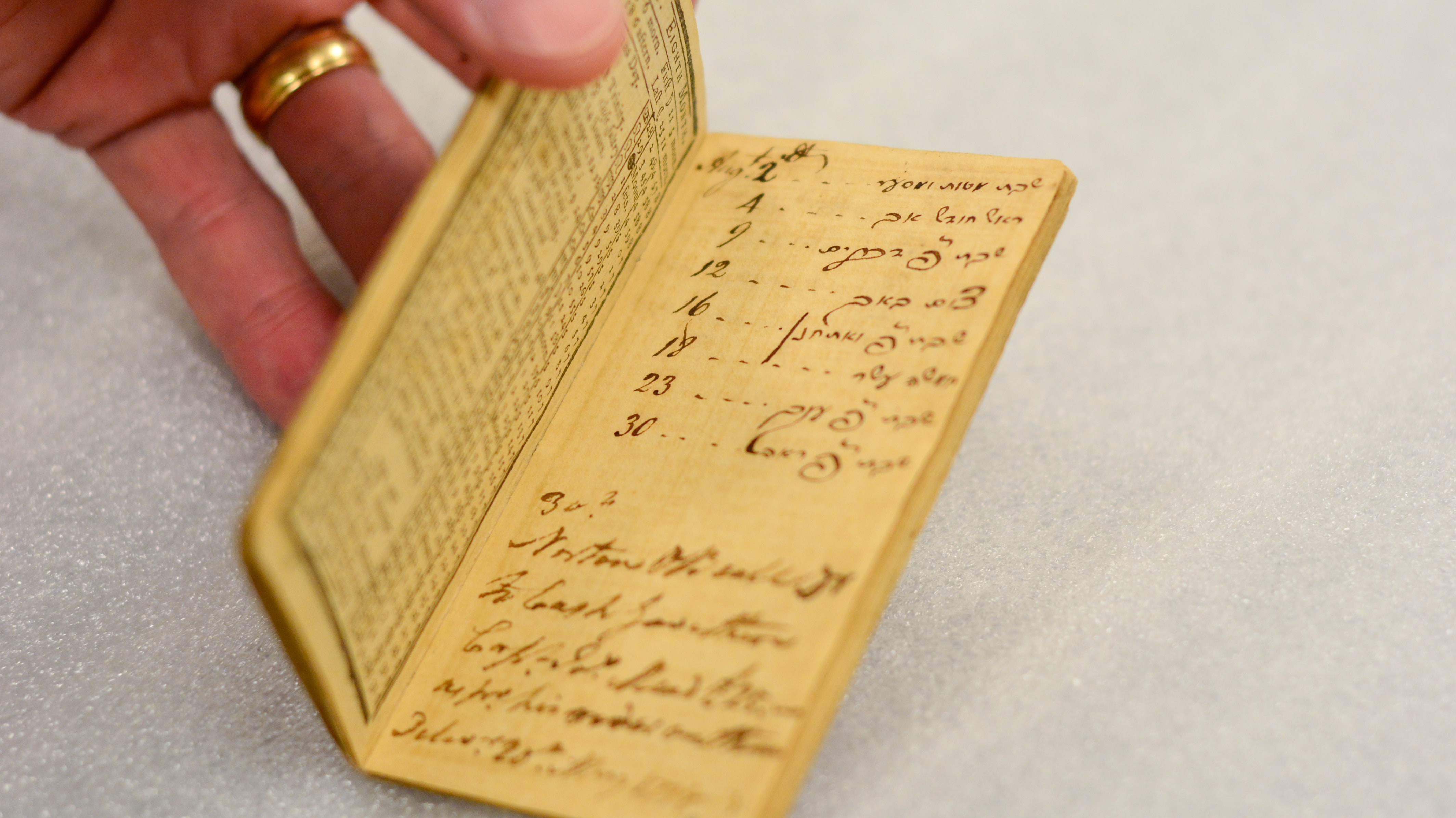 Michael Gratz combined his spiritual and business life in this almanac. Alongside the almanac’s printed calendars, lists, and charts, Michael annotated the Jewish holidays in each month. As the year progressed, he occasionally added business notes. Within this almanac, Michael connected and balanced his public, business, and spiritual lives.

See the display, which will be up for the next year, in the Suzanne and Norman Cohn Exhibition Case in the final gallery of the Museum's core exhibition on your next visit throughout the holiday season.