Designed by artist Ellen Qiong Schicktanz, the Museum has two bronze sculptural reliefs installed along Chestnut Street. The sculptures, which weigh in at 1500lbs. each, depict iconic paintings from the American Revolution.

Artist Ellen Qiong Schicktanz donated the reliefs to the Museum. A recent U.S. citizen who was born in China, Schicktanz began this project to better understand the history of the United States. She was inspired by the ideals, principles, and sacrifices of the founders and sought to create works to honor them. Working with Schicktanz, a team of 8-10 sculptors created the two sculptural panels.

The first sculpture is located in the William and Lauran Buck Revolution Courtyard and features Emanuel Leutze’s “Washington Crossing the Delaware.” The nighttime crossing of the Delaware River was the turning point of the Revolution, when Washington’s army, despite months of demoralizing defeat, found the courage to launch a nearly impossible raid that galvanized the entire nation. 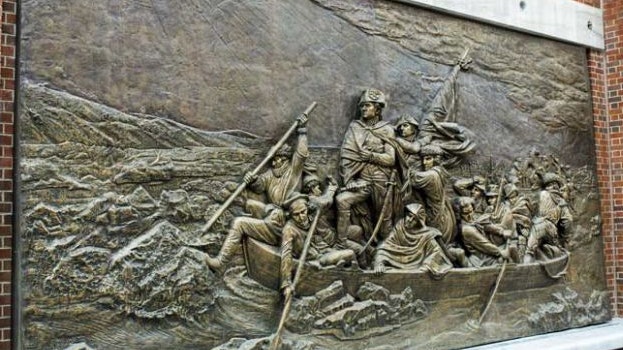 Engraving of Washington Crossing The Delaware on north exterior wall of Museum of the American Revolution building.

The second sculpture is located in the Marjorie and Lewis Katz Liberty Courtyard and features John Trumbull’s “The Declaration of Independence.” The original painting is displayed in the U.S. Capitol in Washington. The foreground figures are life-size, drawing pedestrians into the iconic depiction of the presentation of the Declaration of Independence to the Continental Congress by the drafting committee, which included Benjamin Franklin, John Adams, and Thomas Jefferson. 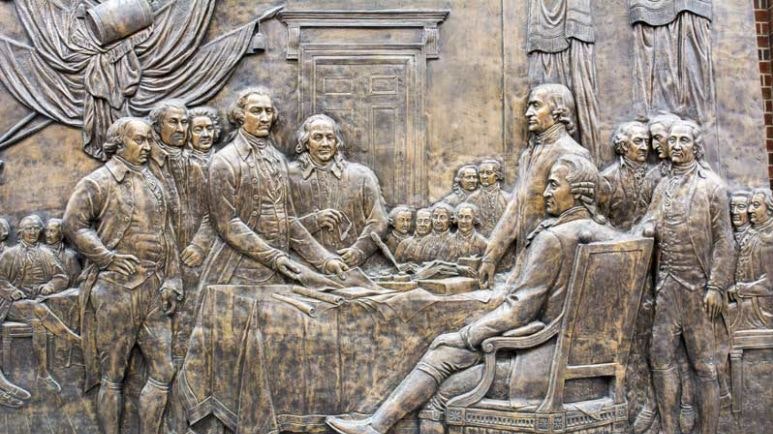 Engraving of John Trumbull's "Declaration of Independence" on the north exterior wall of the Museum of the American Revolution building.