Valley Forge National Historical Park is a popular destination for hiking, running, dog-walking, and picnicking, and it's rare to drive through the park without sharing the road with several cyclists. This was not always the case. In what Reverend W. Herbert Burk called "the days of the horse and carriage, when only the rich drove," Valley Forge was not easily accessible.

In 1906, Reverend Burk dejectedly noted that if he were to announce plans for his Valley Forge Museum of American History there, "the public was not at Valley Forge, and it was not possible that many would go there." 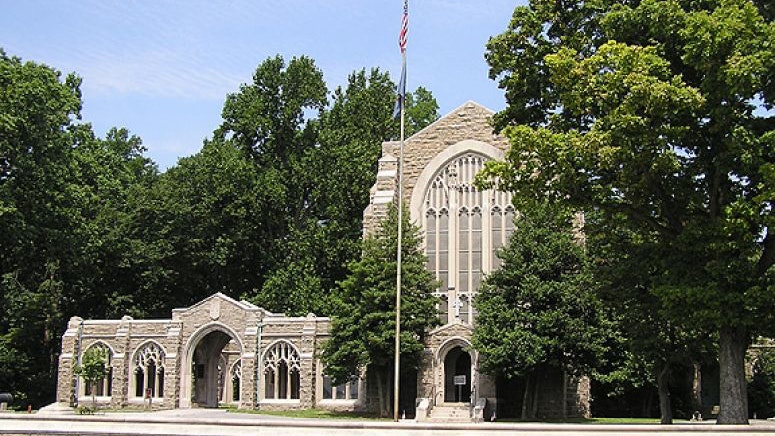 Anticipating that the Valley Forge Museum of American History would eventually be housed in the future Washington Memorial Chapel he was building, Revered Burk hosted a first "Exhibition of American Wars" in his Norristown parish house from February 17-19, 1908. As he stated in the 55-page exhibition catalogue, "Eventually, these relics will be placed in the Patriots' Hall, to be built at Valley Forge." The exhibit featured items such as Washingtoniana, including a fragment of George Washington's Pohick Church, and a loaned collection of Civil War objects. As a fringe benefit, Reverend Burk also introduced an inaugural showcase of his father's "Indian Relics," all found near Valley Forge. Reverend Burk was especially grateful that the exhibition "raised the spirit of helpfulness" among friends and future benefactors.

By Washington's birthday, 1909, progress on the Washington Memorial Chapel's construction permitted Reverend Burk to dedicate the Valley Forge Museum of American History in the new Patriots' Hall, a small 25' by 24' room on the Chapel's ground floor. Ever faithful to elevating George Washington's virtue, Reverend Burk consistently tracked and planned project milestones according to and around that date. On that occasion, he reflected in his book Making a Museum: The Confessions of a Curator that "America was sung, and prayers of dedication were offered."

Reverend Burk saw the Chapel as an "American Westminster" to attract patriotic Americans far and wide, with the new Museum its primary educator. One of the Museum's earliest enthusiasts was local artist Howard Pyle, founder of the Brandywine School near Chadds Ford, PA, and mentor to illustrators including N.C. Wyeth and Violet Oakley. While visiting the Chapel and Museum with his wife, Pyle inked his name in the guestbook with a sketch of George Washington in profile. (This registry is in the now in the collection of the Museum of the American Revolution.) Reverend Burk remembered Pyle's "keen interest in the relics and the thoughts which they suggested... [we discussed] the plans for both [the Chapel and the Museum] and the great future which [Pyle] foresaw to be theirs." Pyle was known for bringing American history to life through art, and many of his illustrations can be seen today at Brandywine River Museum and Delaware Art Museum.

Reverend Burk's sense of purpose in Valley Forge was based on finding others who shared his passion and valued the artifacts' preservation. Visitors like Pyle, according to Reverend Burk, "realized that we were commemorating history and making history." In Making a Museum, he thanks long lists of early contributors and communicates his outstanding belief in the American people to recognize history in the making. All items accessioned in the permanent collection would have to follow Reverend Burk's personal mission, which motivated his ambitious fieldwork in Valley Forge:

[The Museum's] purpose, as was seen at once by the arrangement of the collections, is not the glorification of war, but the development of patriotism along the lines of education as the purpose of the Chapel is the development of patriotism along the lines of religion. It is educational in the best sense of the word and its influence will surely be potent in a kenner appreciation, by those who enter the spirit, of what it has cost, in the work of the soldier and artisan, for the American people to enter upon their heritage of prosperity and peace.

At the "Exhibition of American Wars" in 1908, Revered Burk recollected "the collections that belonged to the Museum were interesting, but of no great extent." When the Valley Forge Museum of American History finally opened at the Chapel in 1909, "the cases were such as I could beg or buy, the relics were few, but [...] they were of real value."

In the summer of 1909, an object would travel to the Museum to bring the public to Valley Forge, as the result of a "letter that made it impossible to sleep" and an unlikely friendship built on a strikingly, and surprisingly, similar spirit of patriotism. That object was George Washington's Headquarters Tent.