Archaeology at the Museum

Prior to the Museum’s construction, archaeologists conducted fieldwork on our site at Third and Chestnut Streets from July through October 2014 and briefly in April 2015 and May 2016. Covering a full quarter of a city block, archaeologists uncovered a record of occupation from the earliest settlement of Philadelphia through the mid-20th century. 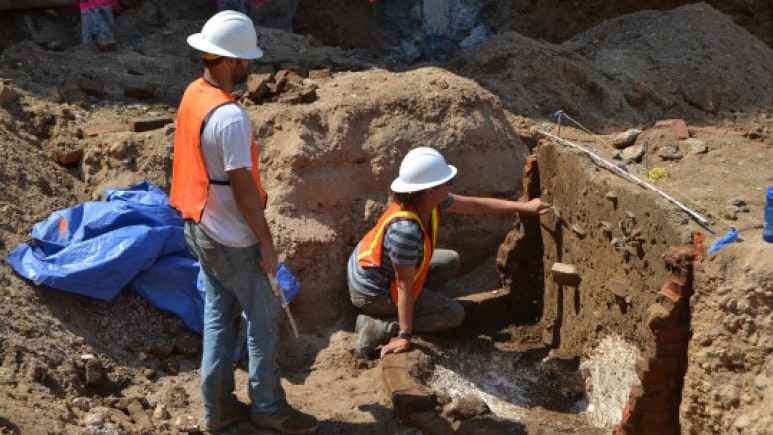 Rebecca Yamin, PhD., the lead archaeologist from the dig, will soon publish her team’s findings in Archaeology at the Site of the Museum of the American Revolution, to be published in December. Yamin is the featured speaker at our next History After Hours: Trash Talk Archaeology event on Tuesday, July 17 at 6:30 pm. Her talk will focus on artifacts dating to the eighteenth century and the stories we can tell about the people whose possessions they once were.

What did the archaeologists find?

A total of 82,000 artifact pieces were found during the excavations, most of them coming from brick-lined privy and well shafts that were sealed beneath a later generation of 19th-century buildings that was demolished when the first Visitor’s Center for Independence Park was built on the site in the 1970s. The artifacts, now in the collection of the Museum, tell the story of the site’s transformation from primarily private households in the 17th century to the commercial Old City thoroughfare of today. 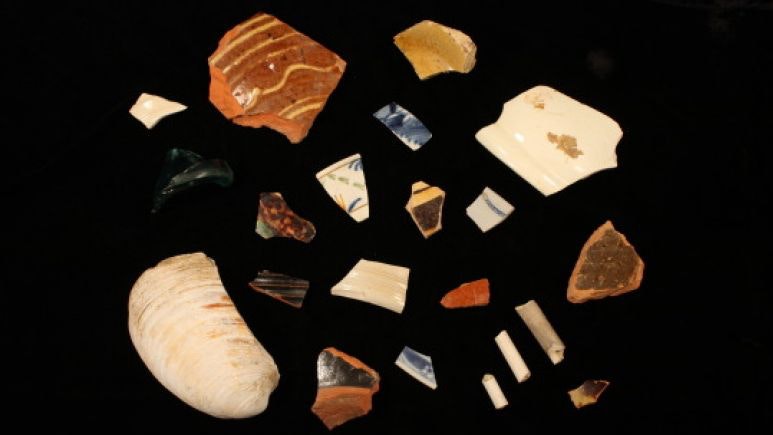 In all, a well and twelve brick-lined privies were excavated, most of them brimming with artifacts. One of the largest assemblages of artifacts came from an 18th-century privy in the southeast corner of the site, located behind a house that would have faced Carter’s Alley. Among them was one of our most treasured findings: the pieces of an English delftware punch bowl.

When these sherds were pieced together in the lab, we were delighted to see a resplendent ship flying British flags with the words “Success to the Triphena” below. (“Triphena” is the name of the ship depicted.) We were the first people to lay eyes on this object since it was broken and discarded around the time of the American Revolution.

American colonists drank enormous quantities of alcoholic beverages, including beer, cider, wine, brandy, rum, gin, and whiskey. One particularly popular beverage during the era of the American Revolution was punch, which combined various ingredients like sugar, citrus juice, spices and liquor, and was commonly served in ceramic “punch bowls” like the “Success to the Triphena” bowl found on our site. 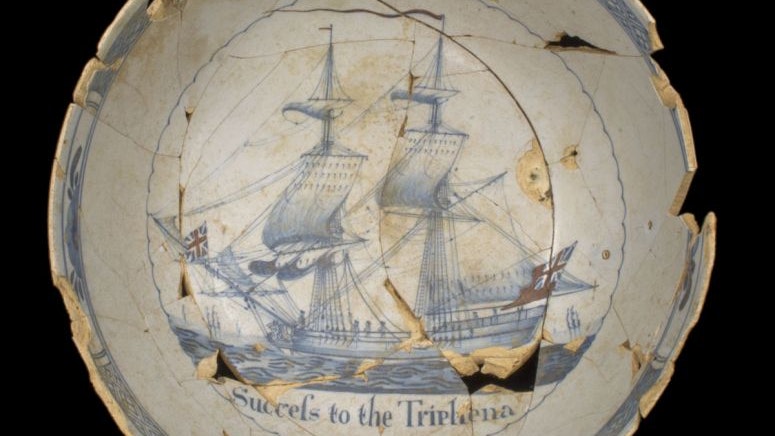 Punch bowl re-constructed from pieces discovered during Philadelphia archaeological dig on site of Museum of American Revolution building. The bowl proudly displayed an image of the Triphena, the ship that carried a 1765 Stamp Act protest letter from Philadelphia to London.

During the 18th century, many of the punch bowls that were exported to the American colonies were produced by potters in Liverpool, England. The collection of the National Maritime Museum in Greenwich, England includes an example that is a very close match to the Triphena bowl. Such bowls were likely produced to commemorate the launch of a new ship or to mark a voyage.

Thanks to the digitization of 18th-century American and British newspapers, we have been able to piece together some fascinating details about the original Triphena. (“Triphena” is Greek for delicate or dainty). The December 1, 1763 edition of the Pennsylvania Gazette carried an advertisement for merchants Robert Lewis and Son, located on Front Street in Philadelphia, where they offered an assortment of goods just imported on the “Triphena, Captain Smith, from Liverpool.” It is certainly no coincidence that Captain Smith’s travels on the Triphena over the next few years regularly carried him to Liverpool, the place where the punch bowl was made, as well as Philadelphia, Charleston, and the West Indies.

In addition to plying the Atlantic and Caribbean waters, the Triphena played an interesting role in the American colonial protest movement against the Stamp Act. In late 1765, Captain Smith carried a memorial from the merchants and traders of Philadelphia addressed to the merchants and manufacturers of Great Britain, asking them to pressure Parliament to repeal the odious act.

Like many of the items discovered on the site, the “Success to the Triphena” bowl is not simply an object—it is also a witness to and product of the rich and fascinating history of our corner of the world as a new nation was being formed.

You can see the Triphena bowl on display in our core exhibition and learn more about its discovery and about the other 82,000 artifacts found onsite at our next History After Hours event.