People of African descent in the American colonies did not simply accept their enslavement. Captured unwillingly or born into slavery, they fought in a variety of ways to secure their freedom, to maintain some measure of independence, and to express their own humanity.

African men and women began resisting their enslavement even before they arrived in the Americas. For example, sailors, ship captains, merchants, and others recounted stories of Africans refusing to eat onboard. This action could quickly lead to failing health and eventual death, especially in the dirty and cramped holds  of slave ships. But because sick Africans were not valuable to them, ship captains sometimes resorted to force-feeding those who refused to eat on their own. Deprived of their ability to resist food, or simply seeking a more immediate end to their circumstances, some Africans attempted to jump overboard or find other ways to die by suicide, either during their passage across the ocean or once they had reached American shores. Their deaths were often not in resistance to the larger institution of slavery, but rather to the pain, suffering, and fear that their individual capture and enslavement caused.

Once in the colonies, resistance to slavery took a variety of forms. Some men, women, and children broke tools, requiring them to be fixed before work could continue. Others chose to work slowly when they weren’t under the watchful eye of their owners or supervisors. However small these moments seemed, they were opportunities for demonstrating agency, or decision-making and the ability to act, and chances to claim some control over one’s time and labor.

Some enslaved people chose to protest their situations by running away. Some left and stayed away for only a few days, seemingly hoping for just a break from their current lives or escape from a specific, temporary situation. Many others left with the clear intention to stay away forever, disappearing into local Native American communities, into small enclaves of free blacks in northern cities, or escaping into or forming their own communities in difficult-to-reach locations, like the maroon societies of Jamaica or the communities within the Great Dismal Swamp in Virginia and North Carolina.

Some even ran to what they thought would be friendlier European colonies, like the men and women who ran from British-controlled Georgia to Fort Mose in Spanish Florida. When Finding Freedom’s Eve, Deborah, and London sought their freedom, they were behaving similarly — running to the British because they were the enemies of the American Revolutionaries. If caught, these freedom-seekers could face serious punishment, including physical injury or death, separation from their families, having to watch others  in their communities be punished, or being sold to the sugar plantations in the Caribbean, where they were likely to die quickly.

Regardless of why they ran, while they were away, these freedom-seekers lived under constant threat of recapture. Slaveowners often spread word that their enslaved people had run, including placing ads in news- papers to offer a reward for their capture, and sometimes paid agents or slave catchers to try to find them. 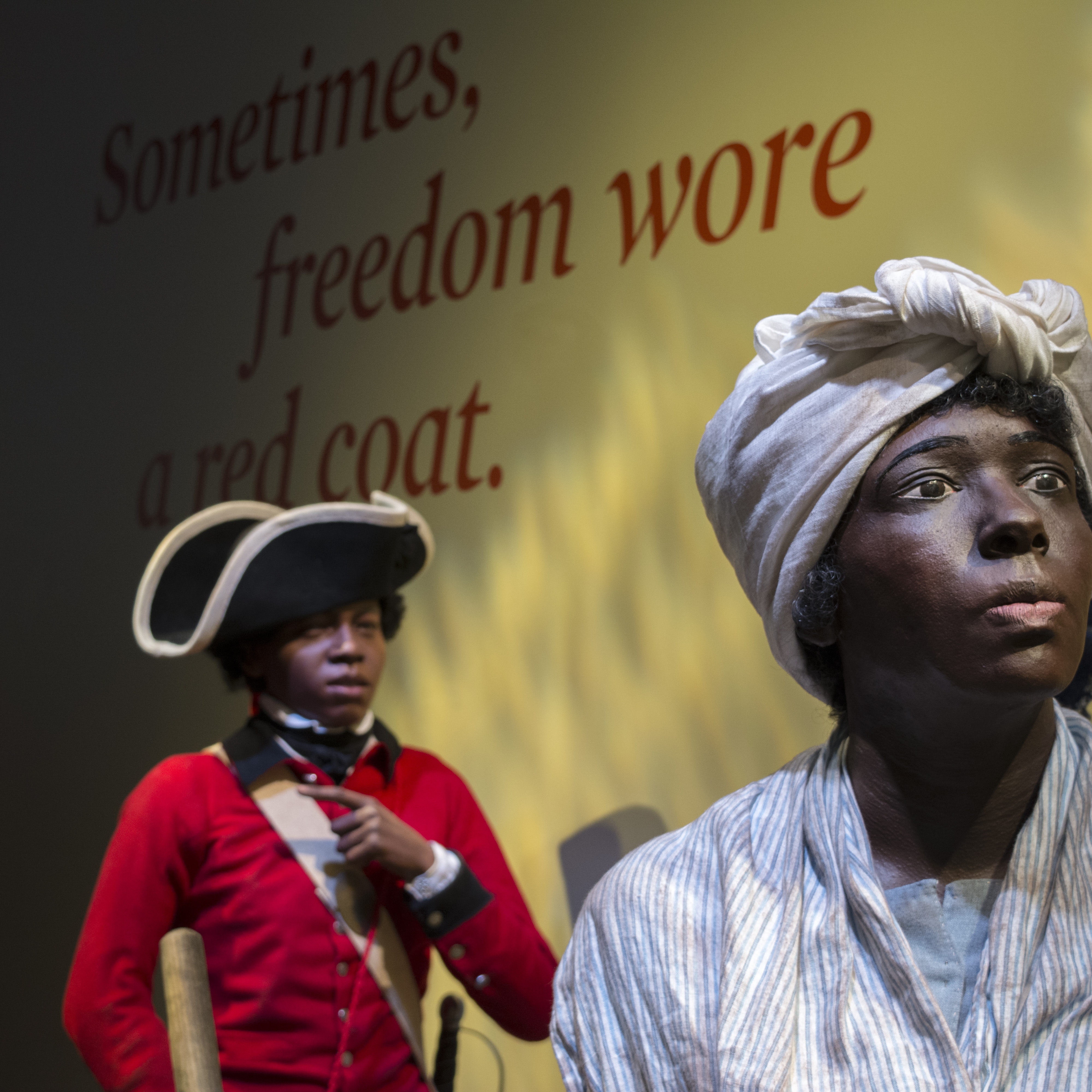 While young men were generally more likely to run away, during the American Revolution, larger numbers of women, children, and elders were able to escape.

People of African descent also fought against their enslavement using violence as a tool. Slave revolts and rebellions broke out in the colonies throughout the 17th and 18th centuries, including Connecticut in 1657, Massachusetts in 1690, Virginia in 1710, New Jersey in 1734, Maryland in 1738, and South Carolina in 1739. In New York in 1712, a group of about 20 enslaved Africans and several Native Americans started a fire to attract their adversaries and then attacked them with weapons. These men and women, most of them of the Coromantee and Pappa peoples, were upset over abuse they had endured. In 1760, in Jamaica, over 1,000 West Africans rose up against British colonists over the span of about a year. But some moments of violence were more personal, such as an individual man or woman killing his or her owner and possibly their families or other nearby authority figures. Fear of poisoning was common among slaveowners.

It was often impossible for the men and women involved in these acts to escape the repercussions of their violence; they were often caught within days if not hours. Some chose to end their lives either immediately or when capture seemed imminent. They knew that angry and fearful slaveowners and others often reserved their worst punishments for those who engaged in violent resistance. Captured resistors were often gruesomely punished or killed, as a warning to others who might consider the same behavior. Finding Freedom’s Jack  would have had to consider his action carefully, knowing what the possible outcomes could be. Colonists of all backgrounds knew that word about violent resistance spread — and spread hope or fear — across the American colonies. In fact, after the 1712 revolt in New York City, legislators in Philadelphia tried to make it harder to bring enslaved people into their own city.

The Power of Words

The Revolutionary Era provided a unique opportunity for enslaved people to resist their continued enslavement: it allowed them to use the language of white colonists who resisted and later revolted against British authority to demand their own freedom. For example, in Boston in 1773, a group of four men of African descent wrote a petition to the governor of Massachusetts. They connected their request for freedom to the acts of legislators  in the colony who formed a resistance movement against British authority, writing:

“The efforts made by the legislative of this province in their last sessions to free themselves from slavery, gave us, who are in that deplorable state, a high degree of satisfaction.

We expect great things from men who have made such a noble stand against the designs of their fellow-men to enslave them.”

The language of the American Revolution also held promise for free people of African descent. Seizing onto the idea of “no taxation without representation,” in 1780, one such group in Dartmouth, Massachusetts — including a young but experienced sailor named Paul Cuffe — wrote a petition explaining that they should not be taxed if they had no ability to vote for the people who taxed them.

Many examples of resistance to slavery involved people of African descent finding ways to say “No” to things: no to abuse, to being treated like property, to having little if any say over their own lives or family. But people of African descent also resisted by saying “Yes”: yes to building families, to creating communities, to maintaining connections to and memories of their cultures, and to honoring their ancestors.

The lives of enslaved people looked different across a variety of settings: urban or rural; the North, Mid-Atlantic, or South; small, mid-sized, or large communities. But within and across all of these settings, people of African descent created caring relationships and built families, maintaining them even when they were separated by sale or the practice of hiring out. In Virginia, for example, a number of the men, women, and children who ran to Lord Dunmore’s fleet in search of freedom in 1775 and 1776 were families fleeing together, even if they came from different owners, or distant properties owned by the same person. Later, Finding Freedom’s London appears to have fled to the British with his uncle, Carter Jack. Finding Freedom’s Eve took her son George with her at least once.

Families were part of larger communities, connected by language, culture, life experiences, and faith, and the connections could be quite strong. In Philadelphia, one historian quoted several older citizens as remembering large groups of Africans gathering, especially on holidays, at the city’s potter’s field, a burial ground for the  poor, enslaved, Native Americans, and others who were not able or allowed to be buried elsewhere. There, they would eat, drink, sing songs in their native languages, dance dances from their native lands, and pour liquids into the ground, perhaps as libations honoring their ancestors. A local doctor in Philadelphia also complained that people of African descent would guard the graves of their loved ones at night, preventing his medical students from stealing bodies to dissect so that they could learn anatomy. In Virginia, less gruesomely, a number of those who ran away to Lord Dunmore were or would become members of the same church, led by a man named “Daddy” Moses. They travelled together from Virginia to New York to Canada and then to Sierra Leone.

Resistance to Slavery in a Revolutionary Age

People of African descent resisted their enslavement in a variety of ways, by saying “No” to certain things and “Yes” to others. They resisted before they landed upon the shores of British North America, and well before the Revolutionary Era. They experienced hope and fear and frustration, and displayed bravery and resilience, as they sought opportunities to secure a moment, or perhaps a lifetime, of freedom or a freer experience.

And as the conflict with Great Britain grew more intense, it seemed that opportunity might just arise.

Through primary source analysis, physical movement, video, and more, consider the risks, rewards and motivations for people of African descent who chose to resist their enslavement.
Read More