A New Constellation: A Collection of Historic 13-Star Flags

Beginning Flag Day 2019, 40 rare, historic 13-star flags went on display, marking the first time that this collection has been displayed together, in the limited-run exhibit, A New Constellation: A Collection of Historic 13-Star Flags. Most of the flags had never been exhibited before. The exhibit was on view from Friday, June 14 through Sunday, July 21, 2019. Because there was no official star pattern for the American national flag until 1912, the design was left up to the artistic liberties of the maker. The flags in this exhibit feature 32 different arrangements of 13 stars, representing the 13 colonies that declared independence from Great Britain during the Revolutionary War. The 13-star flag became the official flag of the new nation on June 14, 1777, when the Continental Congress passed the first Flag Act, from which the name of this exhibit is derived.

I truly believe that there is no substitute for the experience of standing in the presence of these remarkable pieces of American history.

“I am thrilled that these treasures will be seen by visitors from around the world at the Museum of the American Revolution this summer,” said Jeff Bridgman, a leading dealer in antique American flags and political textiles, who is loaning the flags to the Museum. “I truly believe that there is no substitute for the experience of standing in the presence of these remarkable pieces of American history. As far as I know, no one has ever done an exhibit of this kind with just 13-star examples. Their impressive scale and texture are extraordinary, and it will be simply incredible to view them all together in one room.”

Among the highlights, said Bridgman, was one of the earliest known 13-star flags in America, which arranges the 13 stars to form a large single star. Also displayed will be a large flag (5 ft. 9 in. by 12 ft. 4 in.) ca. 1830s-1850s, found in Gloucester, Mass., which features 13 stars in a configuration possibly arranged to crudely form the letters “U” and “S.” The exhibit also features three flags that include eagles as well as stars, one of which was made by venerable flag-maker Sarah McFadden, who is sometimes dubbed “the Betsy Ross of New York.”

The exhibit was on view in the Museum’s first-floor Patriots Gallery. In an adjacent activity space in Patriots Gallery, visitors of all ages could try on Revolutionary-inspired clothing, handle replica objects, and participate in activities like designing their own flag and other crafts.

A New Constellation: A Collection of Historic 13-Star Flags 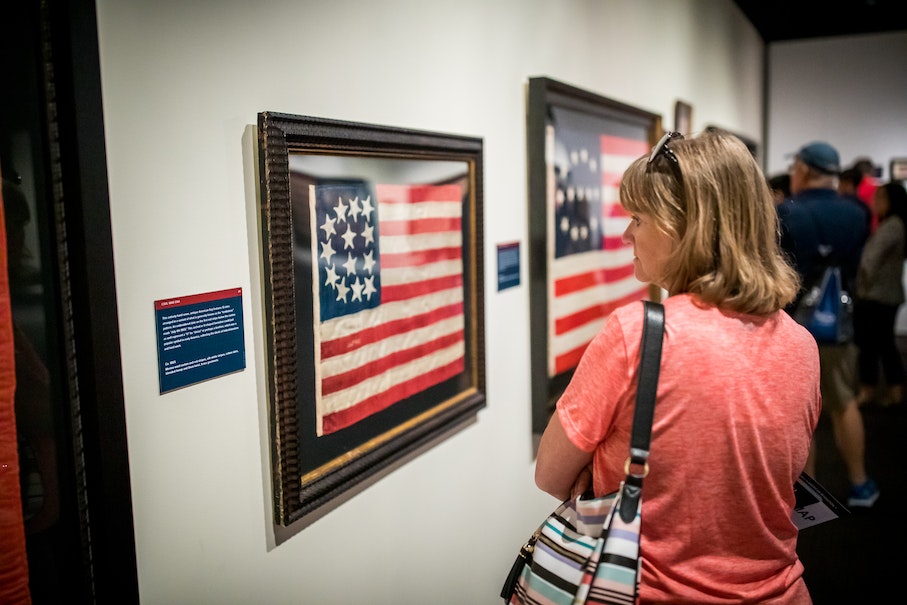 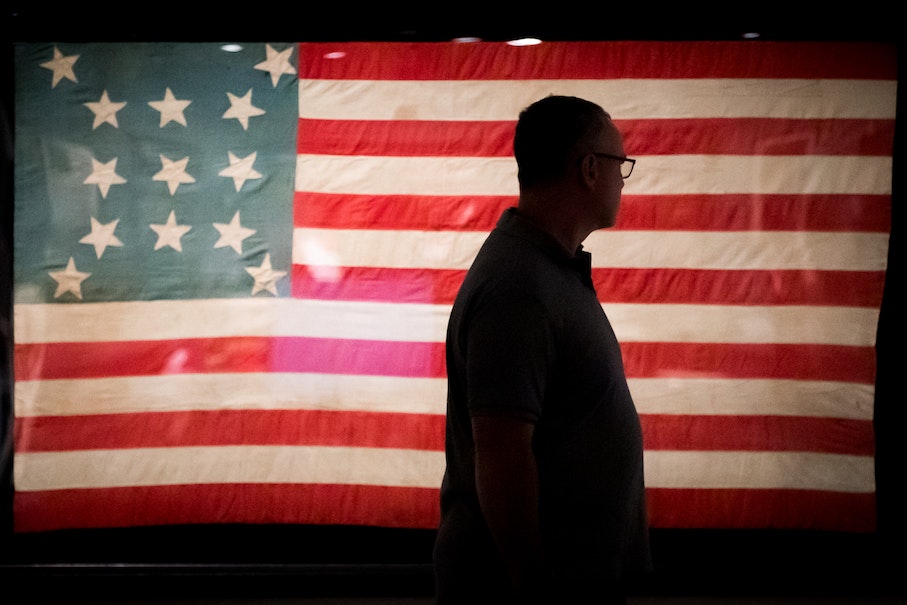 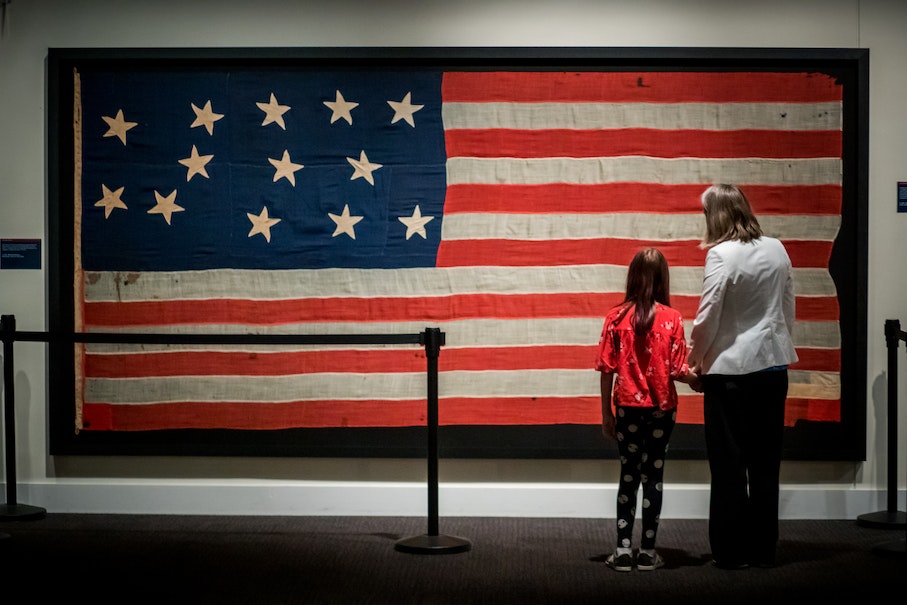 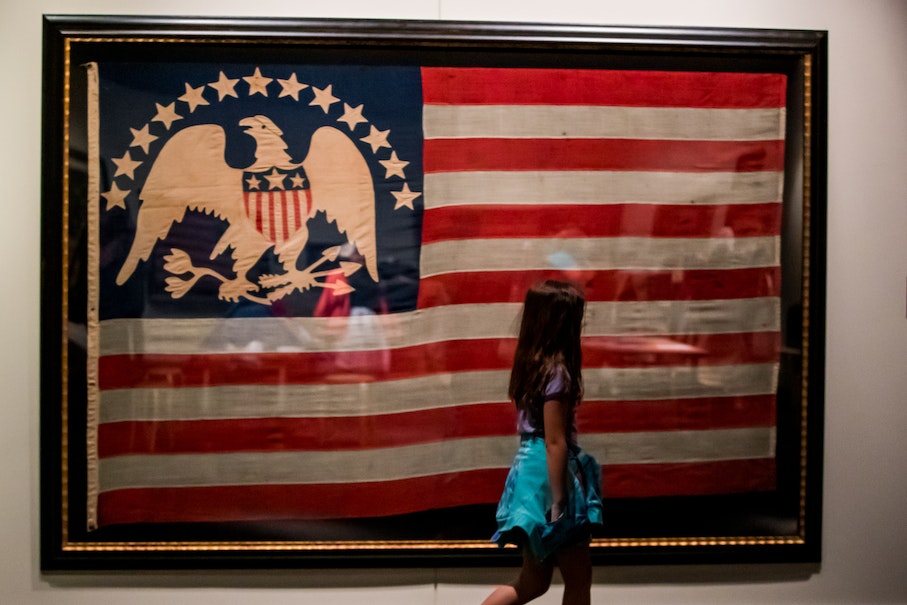 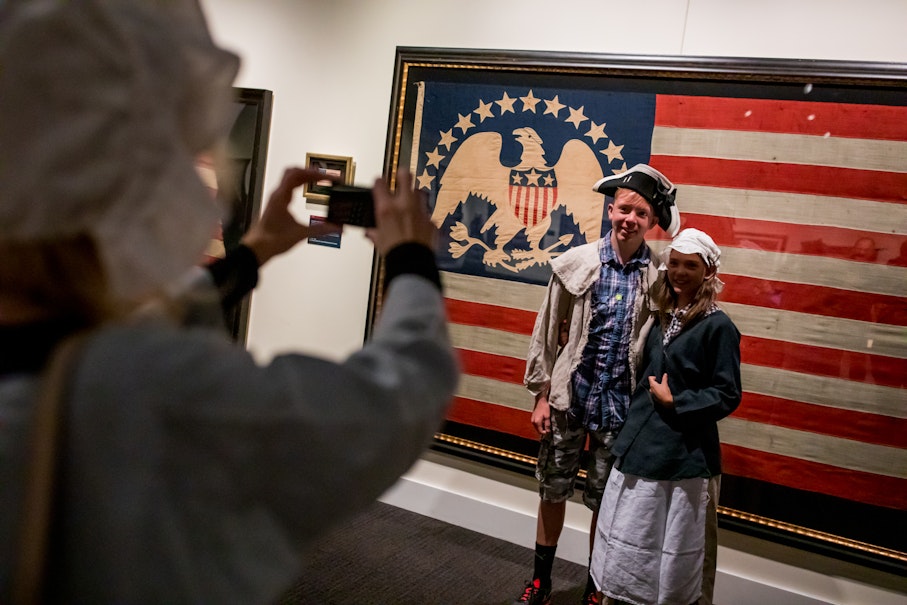 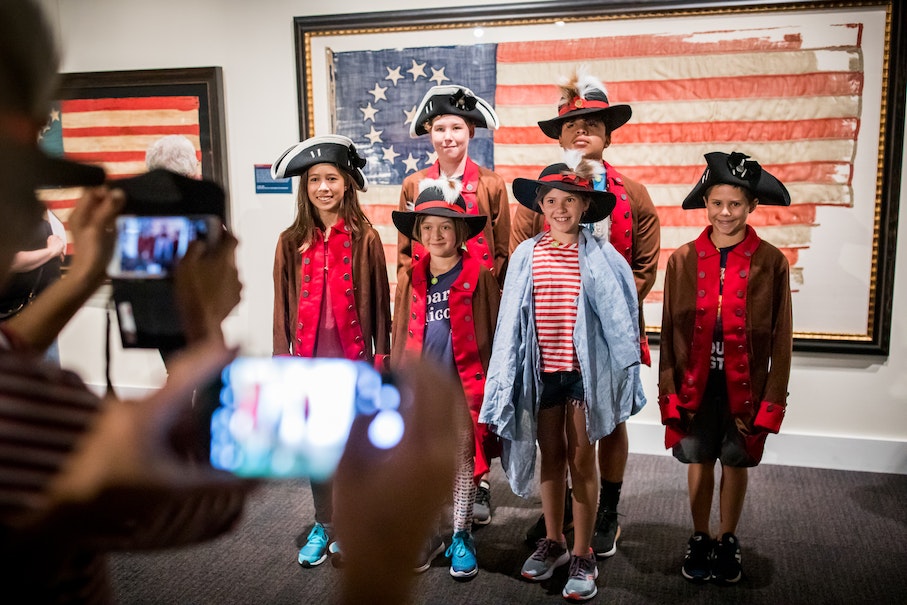 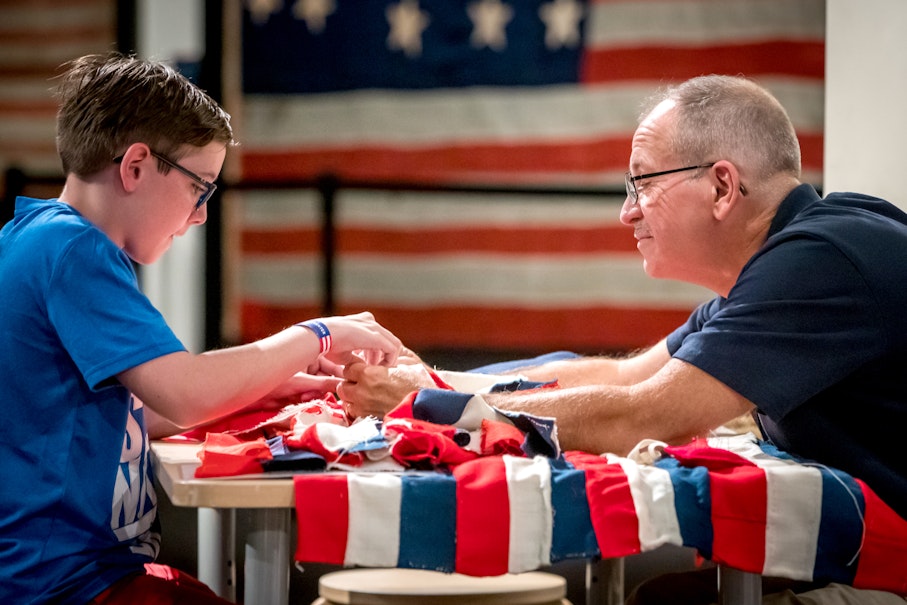 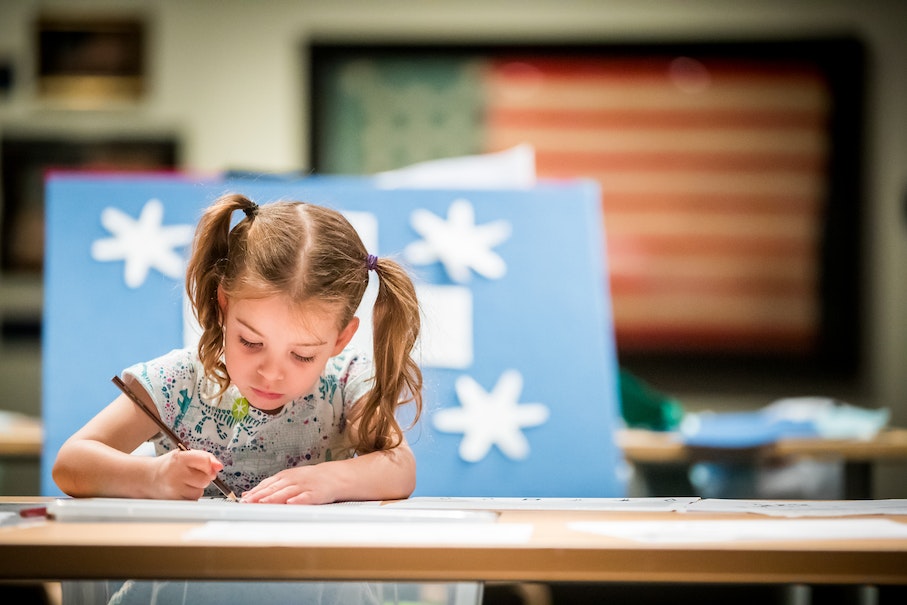 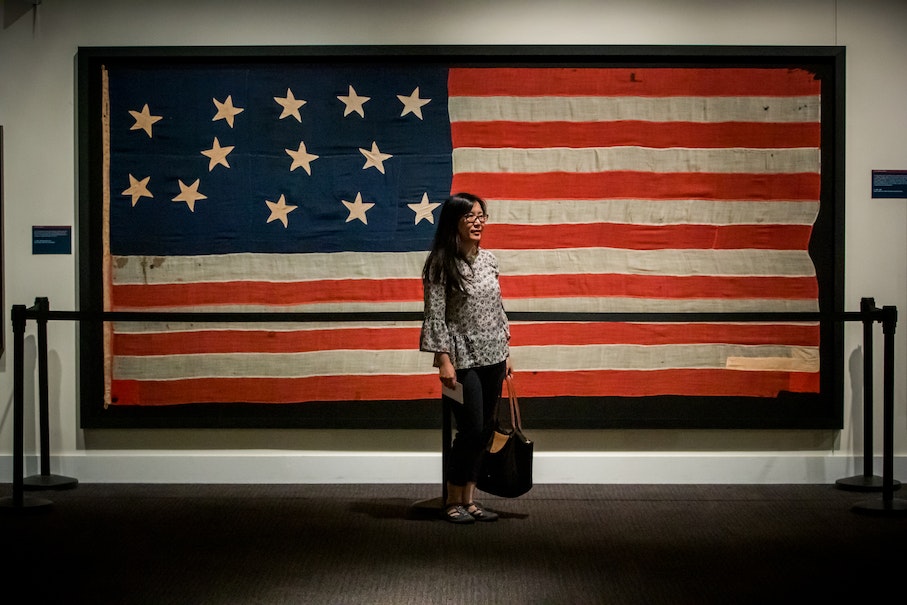 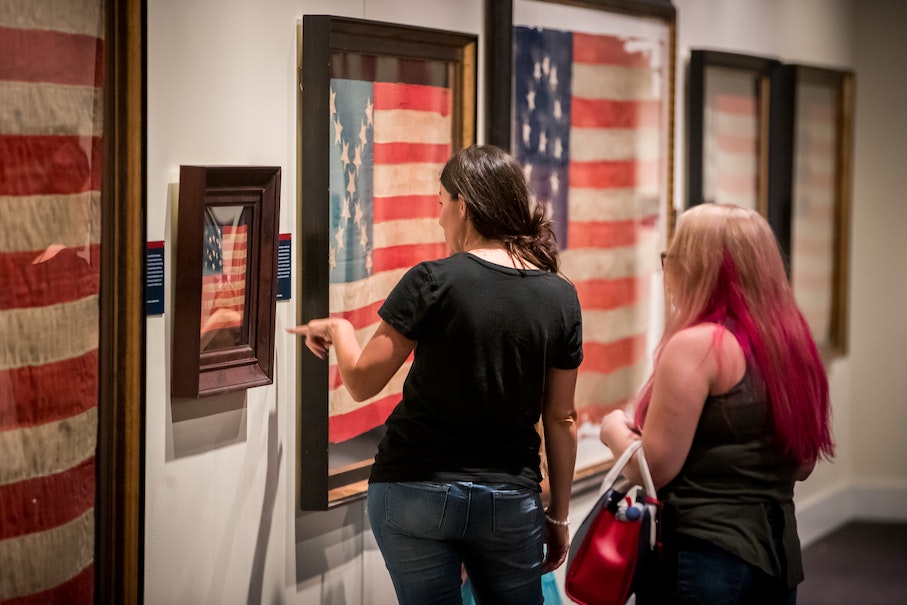 ﻿Jeff Bridgman is the owner of Jeff R. Bridgman Antiques, Inc. He opened his business 28 years ago and has since participated in more than 1,400 antique shows. Bridgman also operates a full-time textile conservation business where he has preserved and framed thousands of flags and related textiles. Today, Bridgman is widely considered to be the foremost expert in the field of antique American flags and the preeminent dealer of flags and American political textiles. He has lectured on antique American flags for many years, has curated museum exhibits, and has performed appraisals for leading museums, insurance companies, and major collectors. Bridgman is a member of the American Antiques Dealers Association and the Antiques Council. He serves on the board of directors of the Stars & Stripes Foundation.