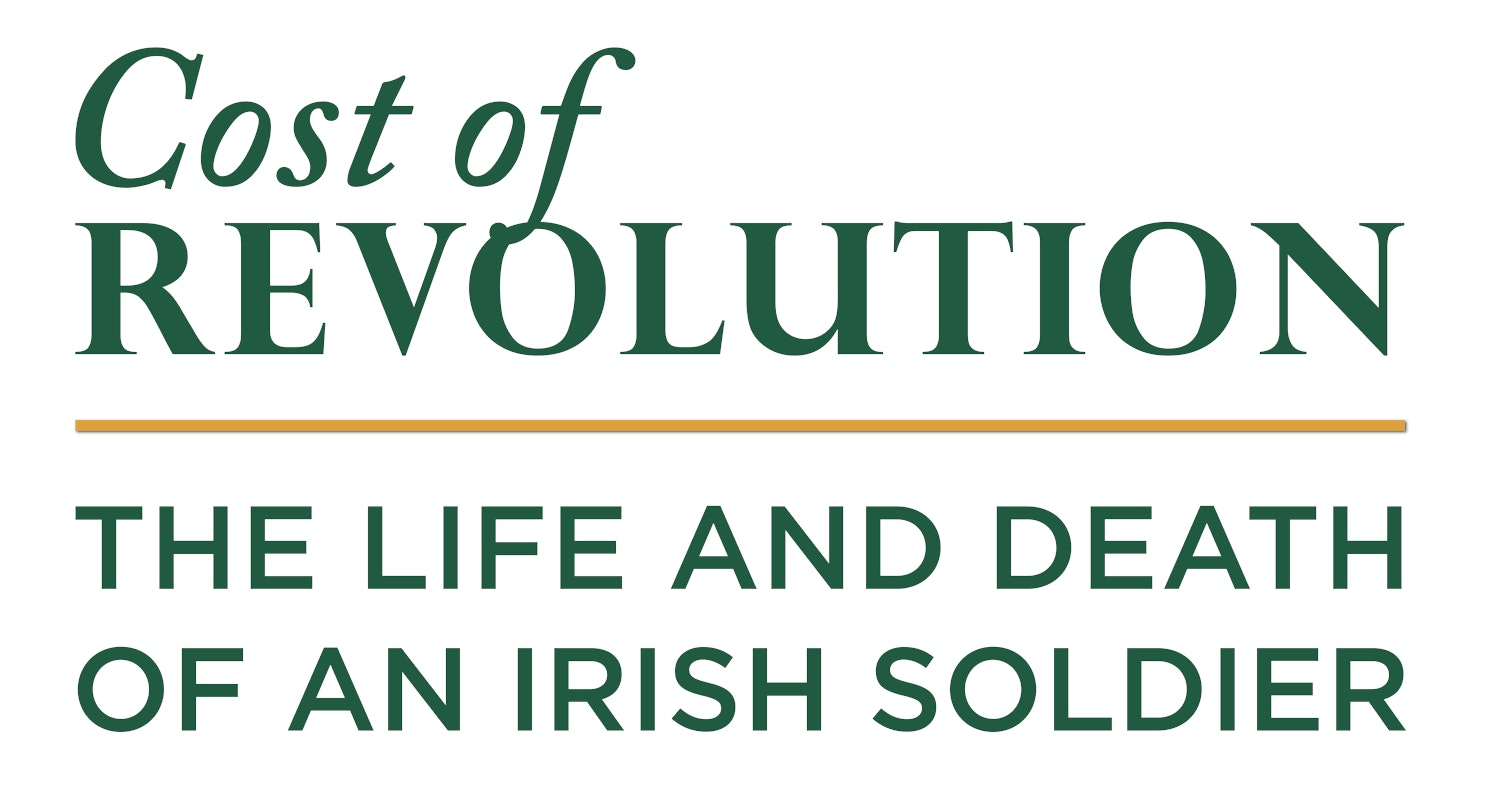 A Man Versed in Misfortune
Private Collection
Private Collection
Richard Mansergh St. George returned home to Ireland in 1778 physically and emotionally scarred from combat. His traumatic war experience tortured him. St. George’s wound gave him constant pain, made him hallucinate, and caused him to have “fits of insanity.” The death of his wife in 1792, four years into their marriage, magnified his agony. In moments of darkness, St. George used art to manage his “painful remembrances.” An emerging art movement called Romanticism offered St. George a way to express his suffering. As a direct response to the Enlightenment, the growing Industrial Revolution, and the violence of war and revolution, Romanticism emphasized the power of human emotion. Instead of painting realistic landscapes or scenes from the Bible or history, Romantic artists painted love, pain, and fantasy. Such art appealed to Richard Mansergh St. George's wounded heart and soul.

Xavier della Gatta’s paintings of the battles of Paoli and Germantown may have helped St. George manage his traumatic memories of war.

In the 1780s, St. George sought comfort for his head pains in Italy’s warmer climate. Going on a gentleman’s “Grand Tour,” St. George visited art collections, the Vatican, Roman ruins, and the archaeological sites of Herculaneum and Pompeii near Naples. He also traveled to France and Germany.

In Naples, he met artist Xavier della Gatta, who painted Richard Mansergh St. George’s violent experiences at Germantown and Paoli. Della Gatta included depictions of St. George’s friends and fellow officers in the foreground of each painting. St. George likely commissioned the paintings and hung them in his home in Ireland as conversation pieces to help tell the story of his harrowing time in America. 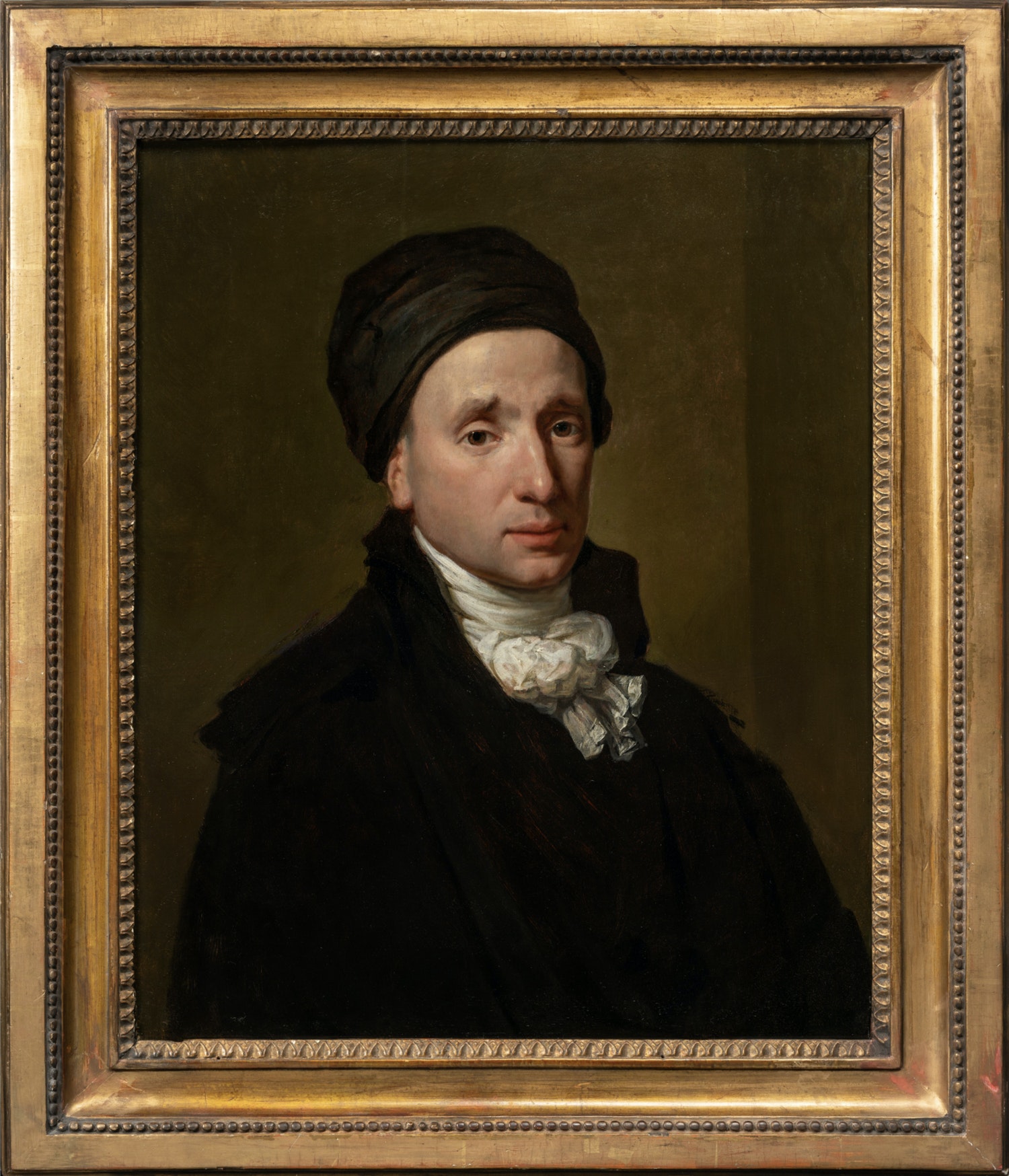 He was dressed in the deepest mourning, a black silk cap on his head which entirely concealed his hair. He had worn it these many years in consequence of a wound he received in America …” 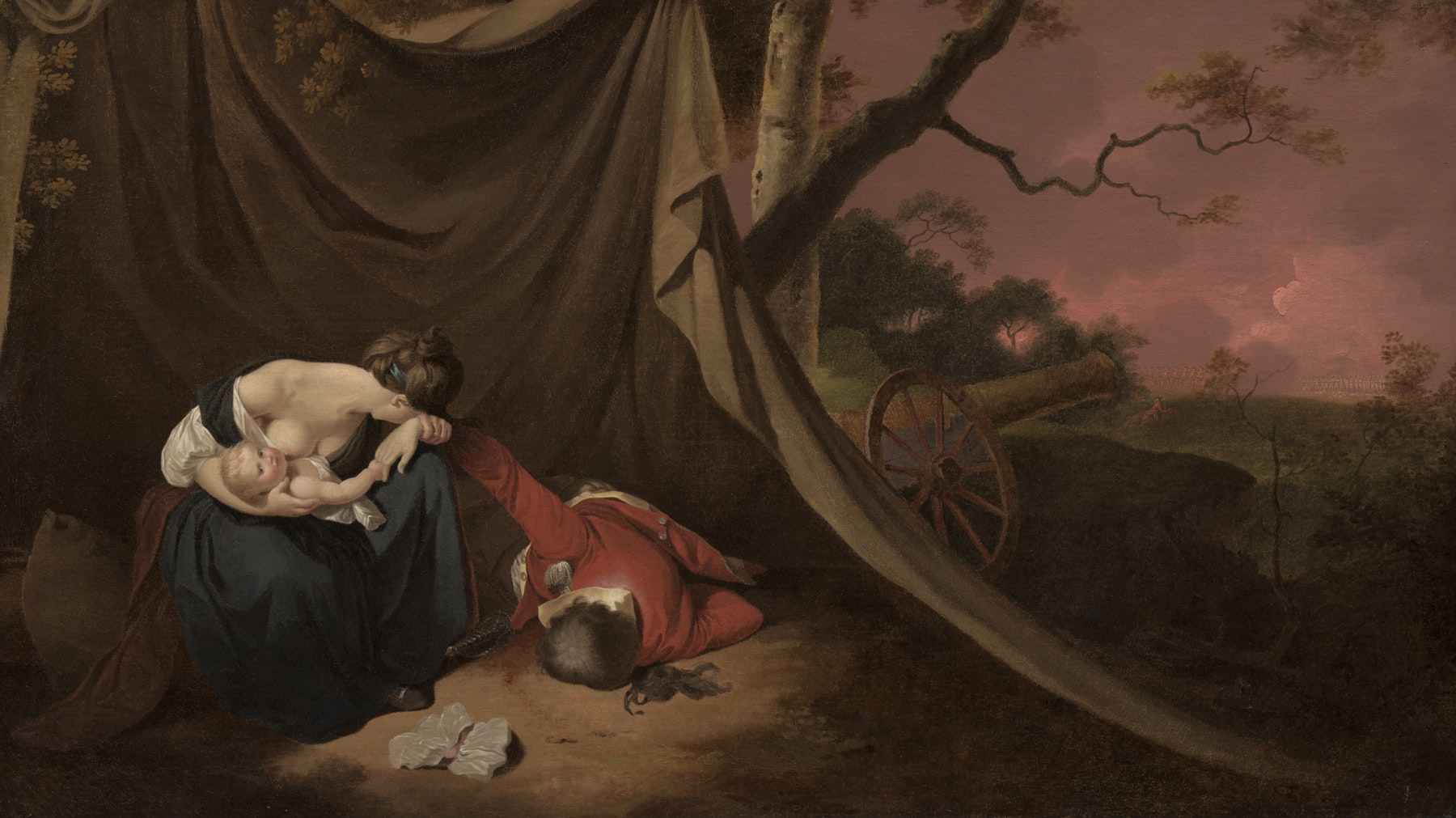 Art helped Richard Mansergh St. George manage his psychological pain. St. George continued to sketch “lively and spirited scenes” after the war in America. But he also drew “melancholy or horrific subjects” that probably reflected his distressed mind. The paintings of Henry Fuseli, a Swiss artist who worked in England, caught St. George’s attention. Fuseli painted nightmares, violence, and passion and helped usher in the Romantic era of art. Fuseli’s paintings, especially “The Nightmare,” shocked and inspired observers. As someone who suffered from daily pain and hallucinations, Richard Mansergh St. George could relate to Fuseli’s paintings. The two men befriended each other.

I wish to be at ease, the most obscure of men, and one at peace. No trick procures it. I take laudanum by advice, and snuff. I divert my thoughts. I walk till fatigued, read, weary myself, drink wine. But all in vain do I resist. Despair will have the day. I run from room to room, from seat to seat, talk with servants, look out the window, out at the door, eat against appetite. There is no ease…” 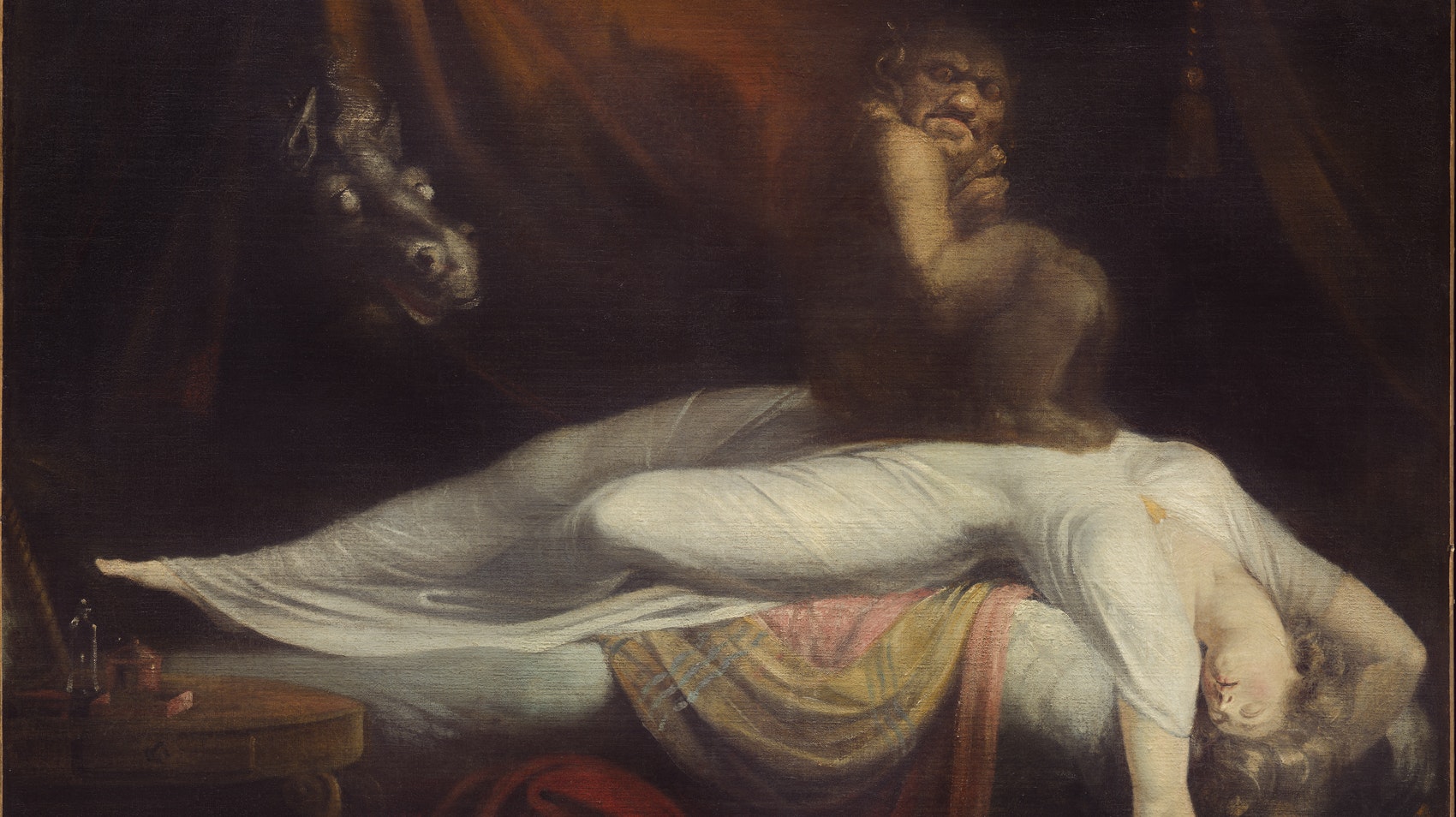 “A Fit of Insanity”

Richard Mansergh St. George suffered from the effects of a traumatic brain injury. He endured daily outbursts of rage and hallucinations for the remainder of his life. Dublin artist J.D. Herbert remembered one such outburst. St. George interrupted one of Herbert’s visits to St. George’s home because of “a fit of insanity, to which he was periodically subject.” St. George chased his house guests away by shouting and swinging a saber while wearing one of his old military uniforms. People who suffered from head injuries in the 1700s had little hope for effective medical help. Seeking to relieve his chronic pain, St. George took laudanum (an opium solution), drank wine, and took snuff (powdered tobacco). Instead of helping, these drugs may have contributed to his hallucinations and outbursts.

I am daily visited with convulsive attacks—three this very day—melted down also by nightly hallucinations and dreadful visions and suggestions—sudden delirium also—yesterday one terrible to recollect—and many more a few days previously. 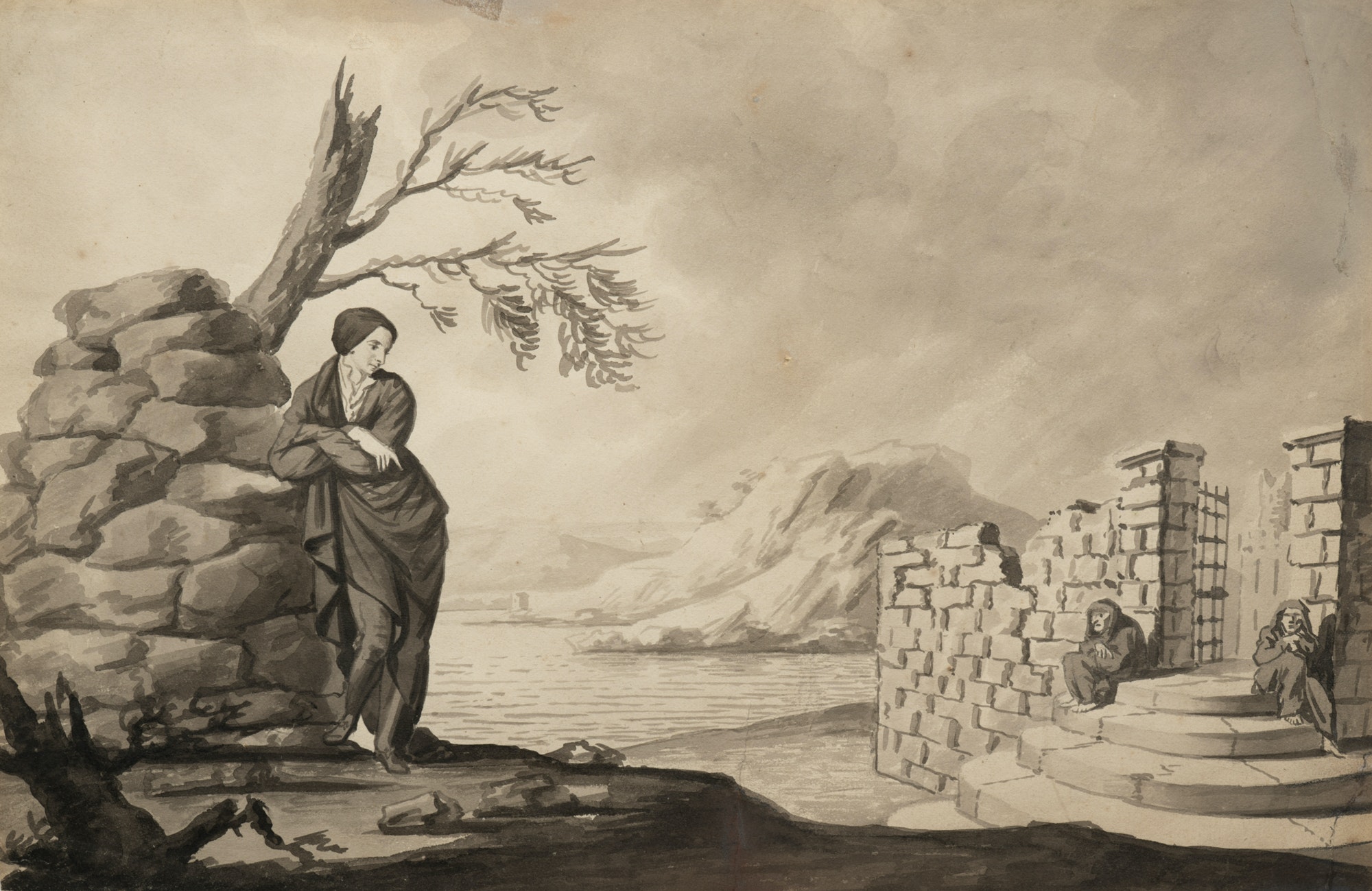 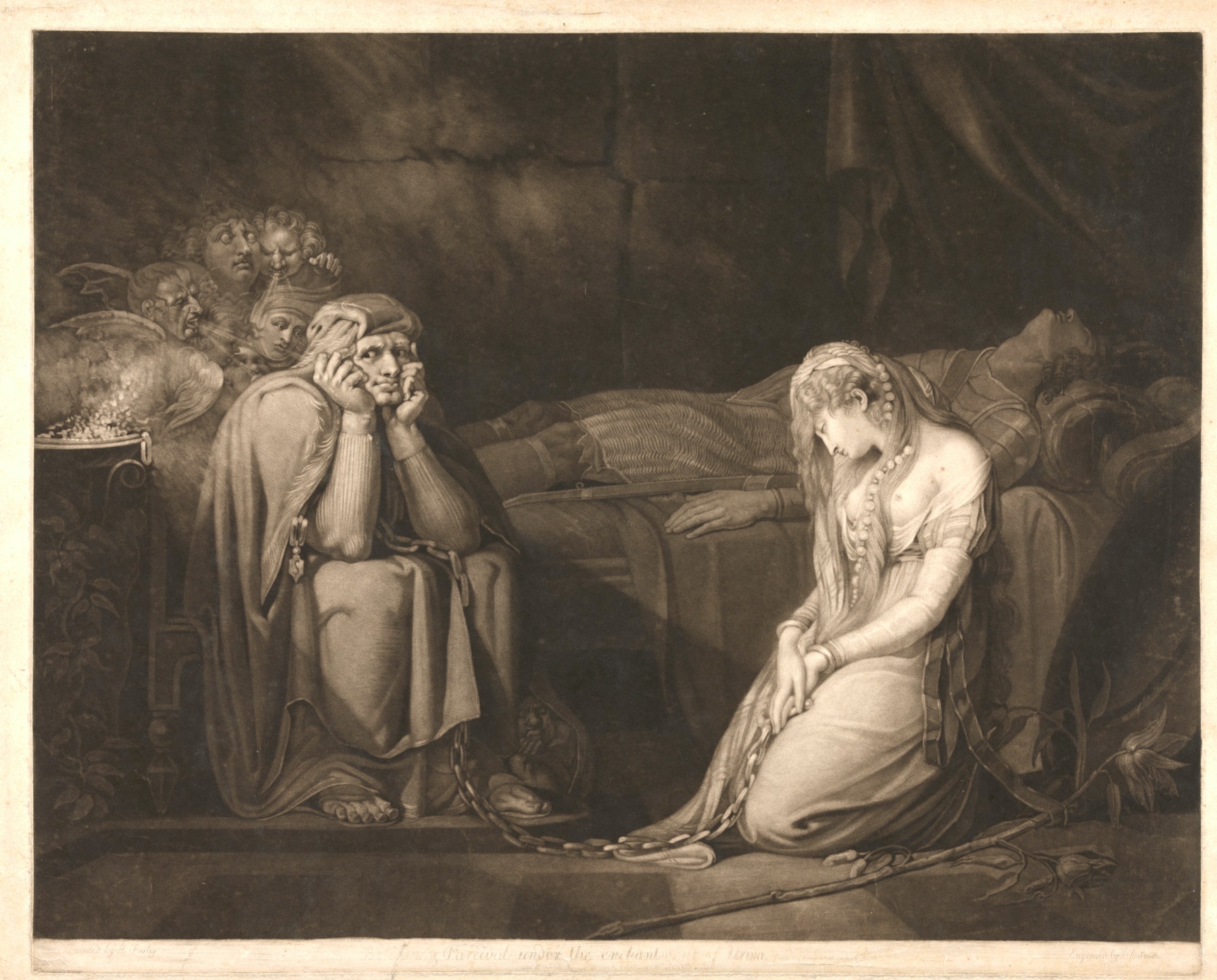 Richard Mansergh St. George also used theater to distract himself from his persistent pain. In 1783, St. George staged an outdoor medieval fantasy play featuring knights, magicians, and maidens at a property he owned in England. Henry Fuseli’s paintings may have inspired the production. Sir Brooke Boothby (dressed as a knight) and Fuseli (portraying a magician) acted out the key roles. Boothby led Fuseli through St. George’s woods to slay monsters, rescue a maiden from a spell, and listen to fairies sing their praises. Poet Anna Seward brought the evening’s theatrics to a close with poetry honoring their host. St. George continued to stage similar elaborate theatrical productions at his estate in Ireland. 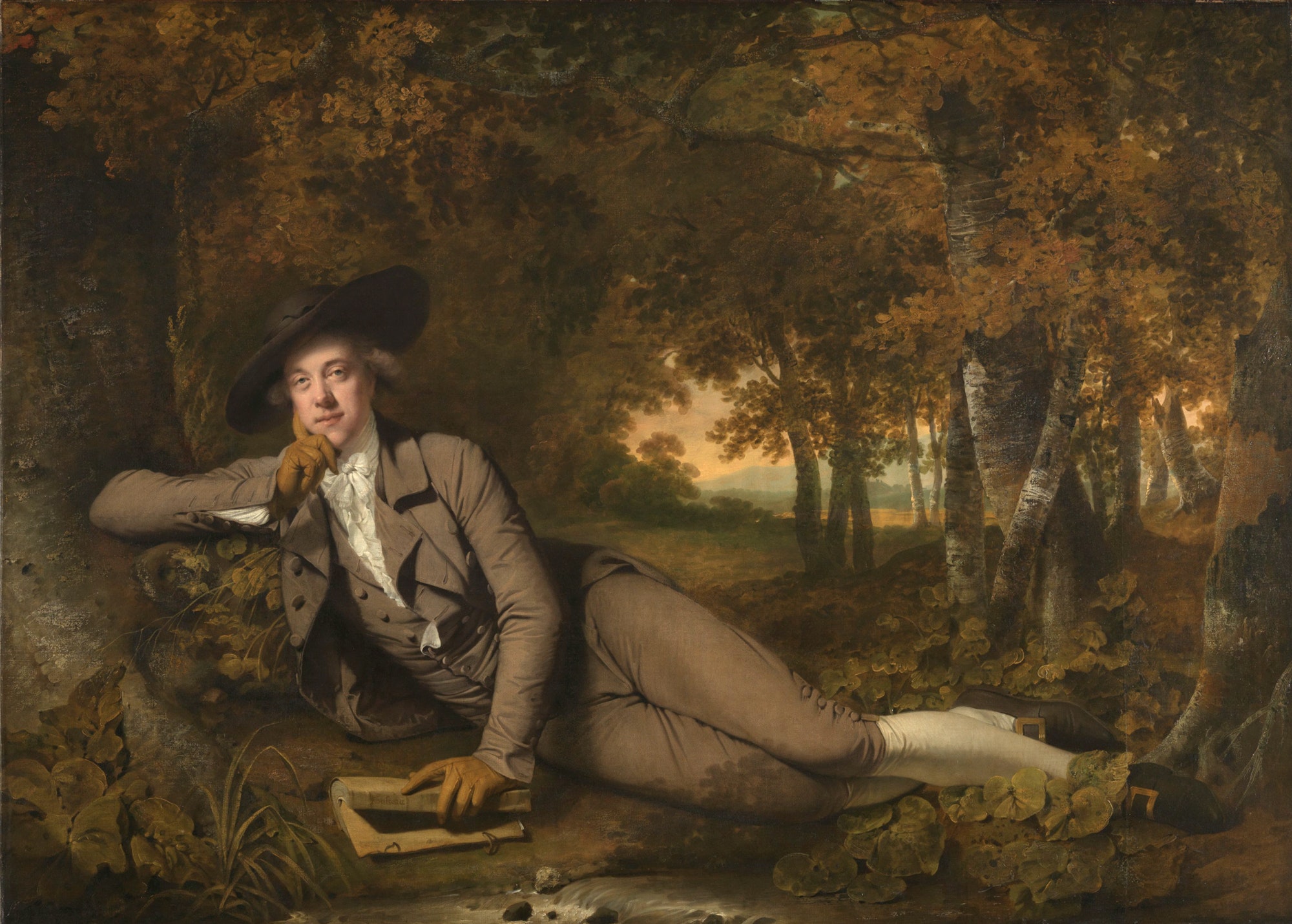 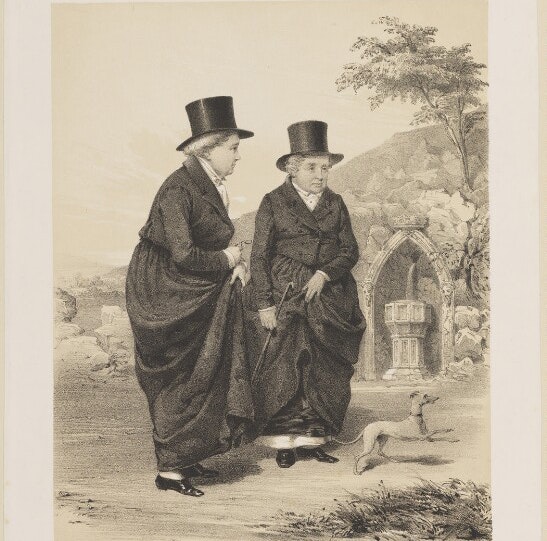 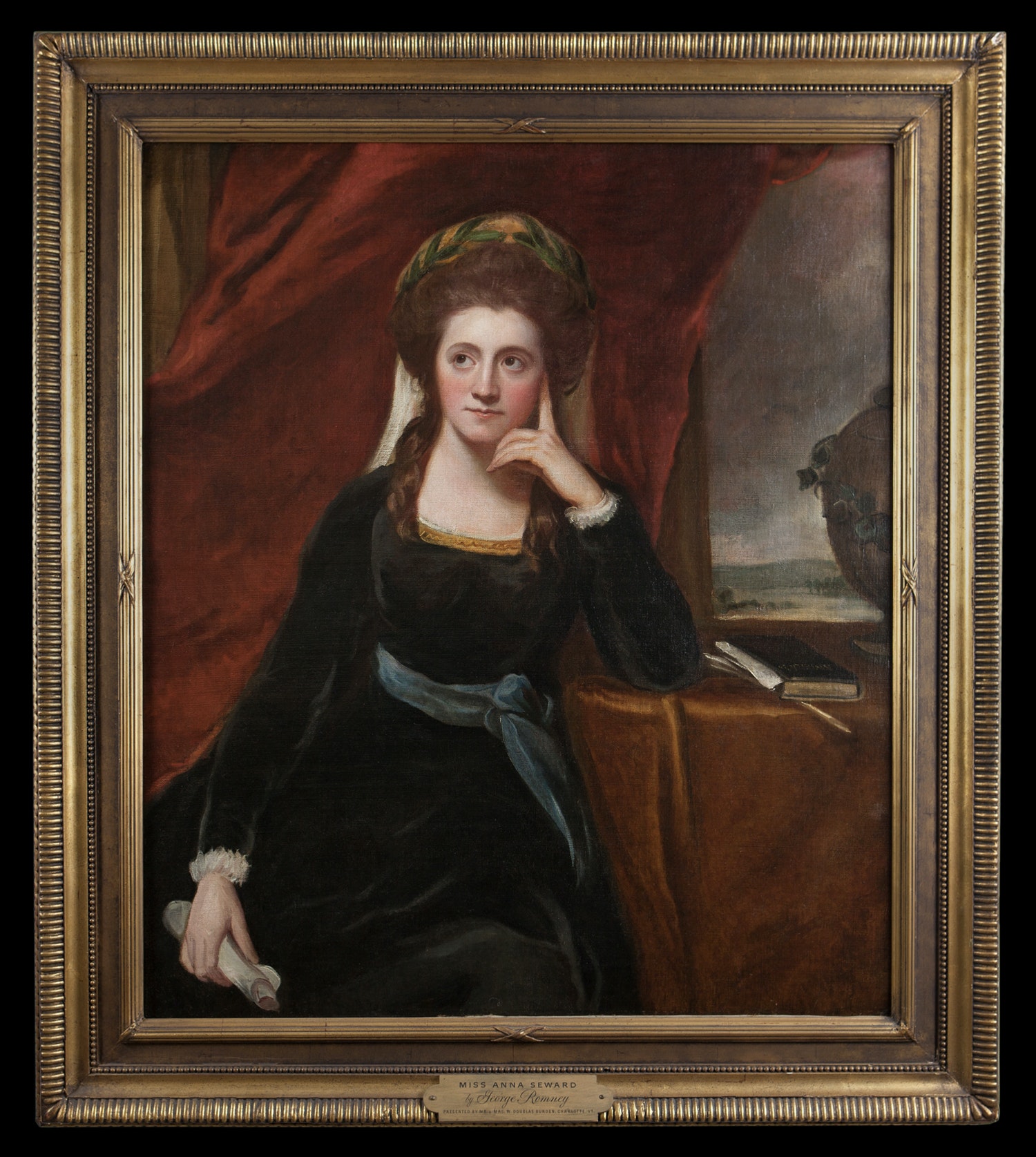 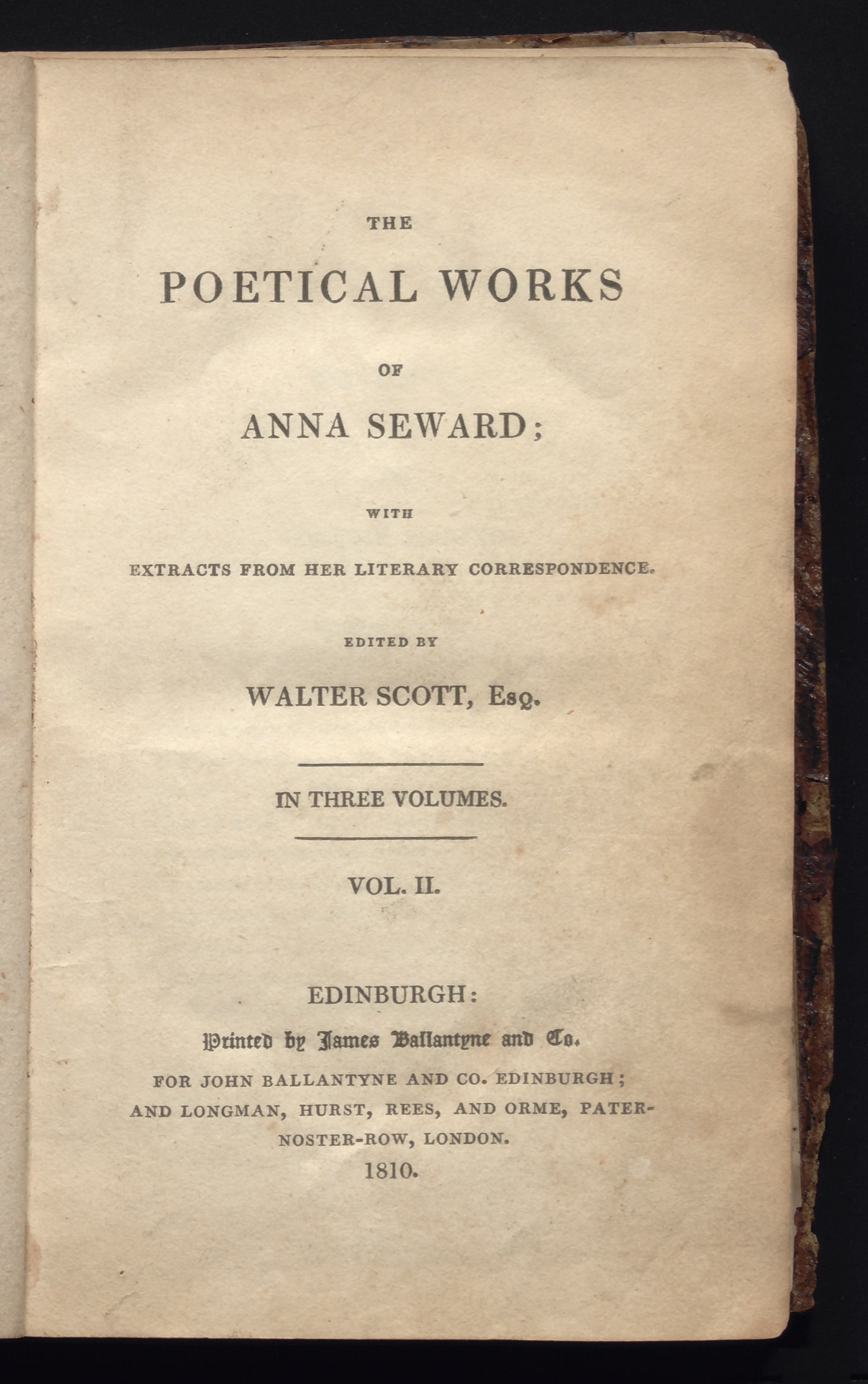 He now lives with a considerable part of his head shot away, and though feeble, emaciated, and in almost constant pain, his imagination and his virtues have lost nothing of their vigour.”

Richard Mansergh St. George embraced Romanticism. Friends called him a “romantic” because of his chivalry, interest in fantasy, and his intense range of emotions. Instead of hiding his head wound from public eye, St. George emphasized it with his silk cap and robe. He often sketched in full view of other genteel members of his social group, the Kildare Street Club in Dublin. At his properties in Ireland and England, St. George hosted parties with artists and staged theatrical productions. According to one observer in the London publication The Gentleman’s Magazine, “His distinguishing trait, and what gave something of an eccentric cast to his conduct throughout life, was romance. This was the source from which his actions in general seem to have taken their tinge.”

A Man Versed in Misfortune

When Richard Mansergh St. George’s wife passed away in August 1792, his life took another dark turn.

St. George married widow Anne Stepney Doyne in 1788. They had two sons in their four years of marriage. According to St. George, his love for Anne was deep and passionate. Her sudden death from a sickness made him plunge into deep depression.

In a 1792 letter following Anne’s death, St. George poured out his heart and soul to Henry Fuseli. In the letter, he commissioned a painting that could be used to express his grief to his sons. He shared his plan to have the painting, along with the portrait of his wife, kept in a locked room in his home and later revealed to his sons when they were mature enough to understand their father’s emotions. For an unknown reason, Fuseli never painted the portrait. St. George’s letter remains in the possession of his descendants. 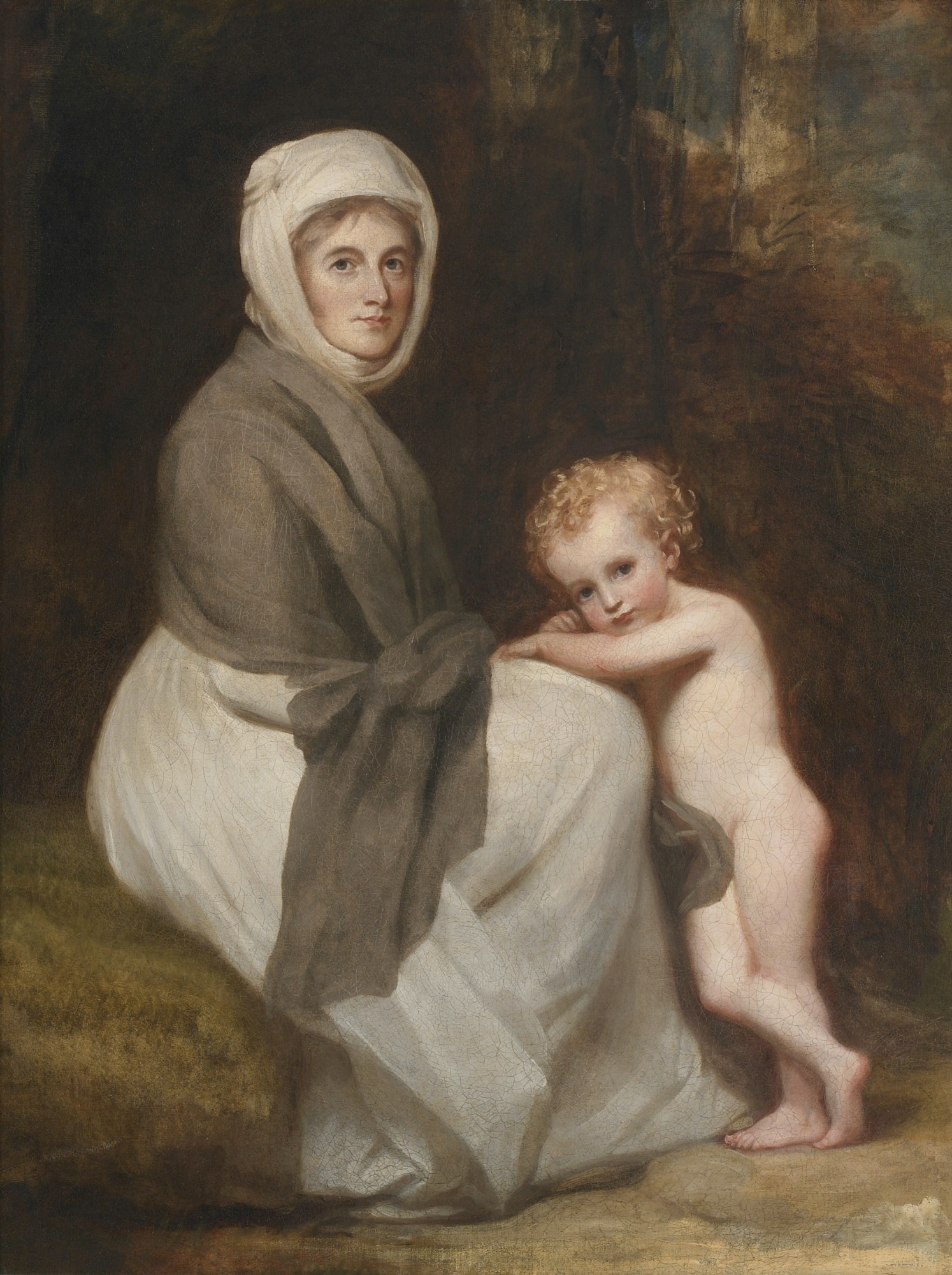 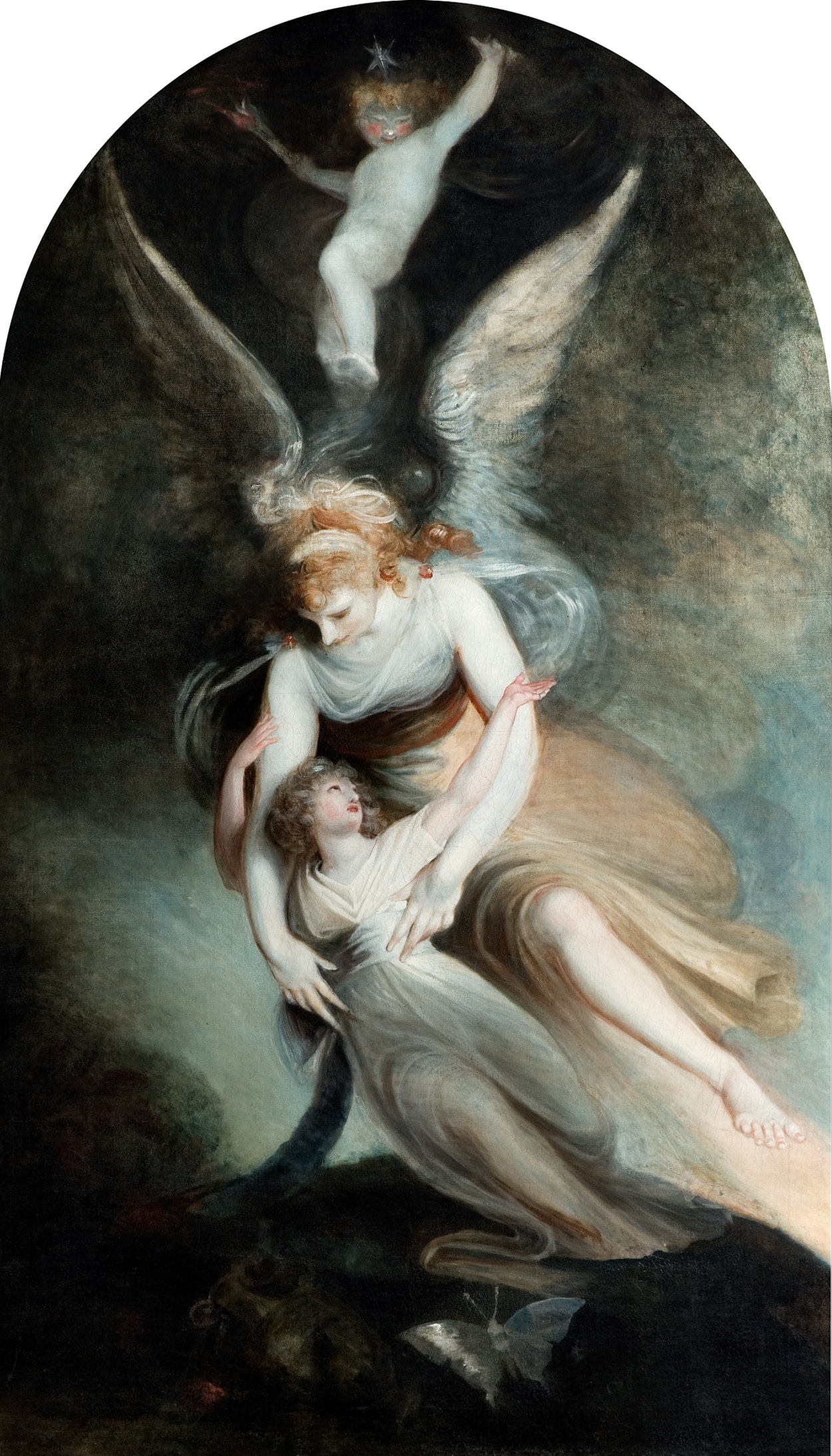 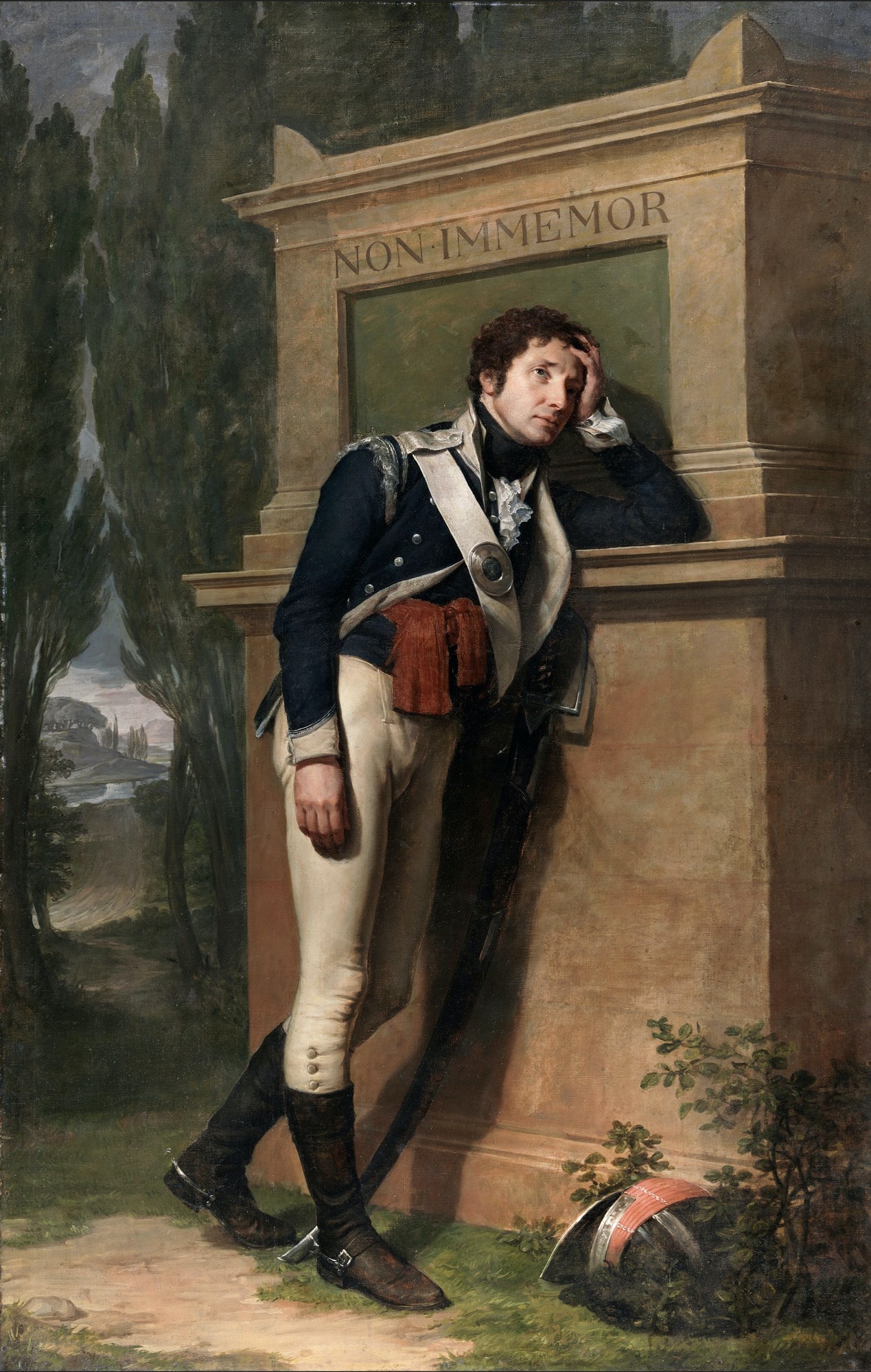 The fact is I have lost all Balm of life. The vital Essence in me is destroyed. I would give millions – if I possessed them – to feel what Grief is, as I have heard it spoken of.”

Richard Mansergh St. George reflecting upon the death of his wife