Two paintings of the Revolutionary War battles of Paoli and Germantown in the Museum of the American Revolution’s collection have puzzled historians for decades. Created by Italian artist Xavier della Gatta in 1782, the paintings vividly and accurately depict two engagements that were part of the British campaign to capture Philadelphia in 1777. Della Gatta, however, never set foot in America, which left historians asking: why did this Italian artist choose to paint two Pennsylvania battles, and how was he able to depict them so accurately? Careful detective work has revealed answers to these questions in the life of Richard Mansergh St. George, an artistic Irish officer in the British Army and a veteran of both battles. The study of these paintings contributed to the rediscovery of St. George’s story and inspired the exhibit Cost of Revolution: The Life and Death of an Irish Soldier. 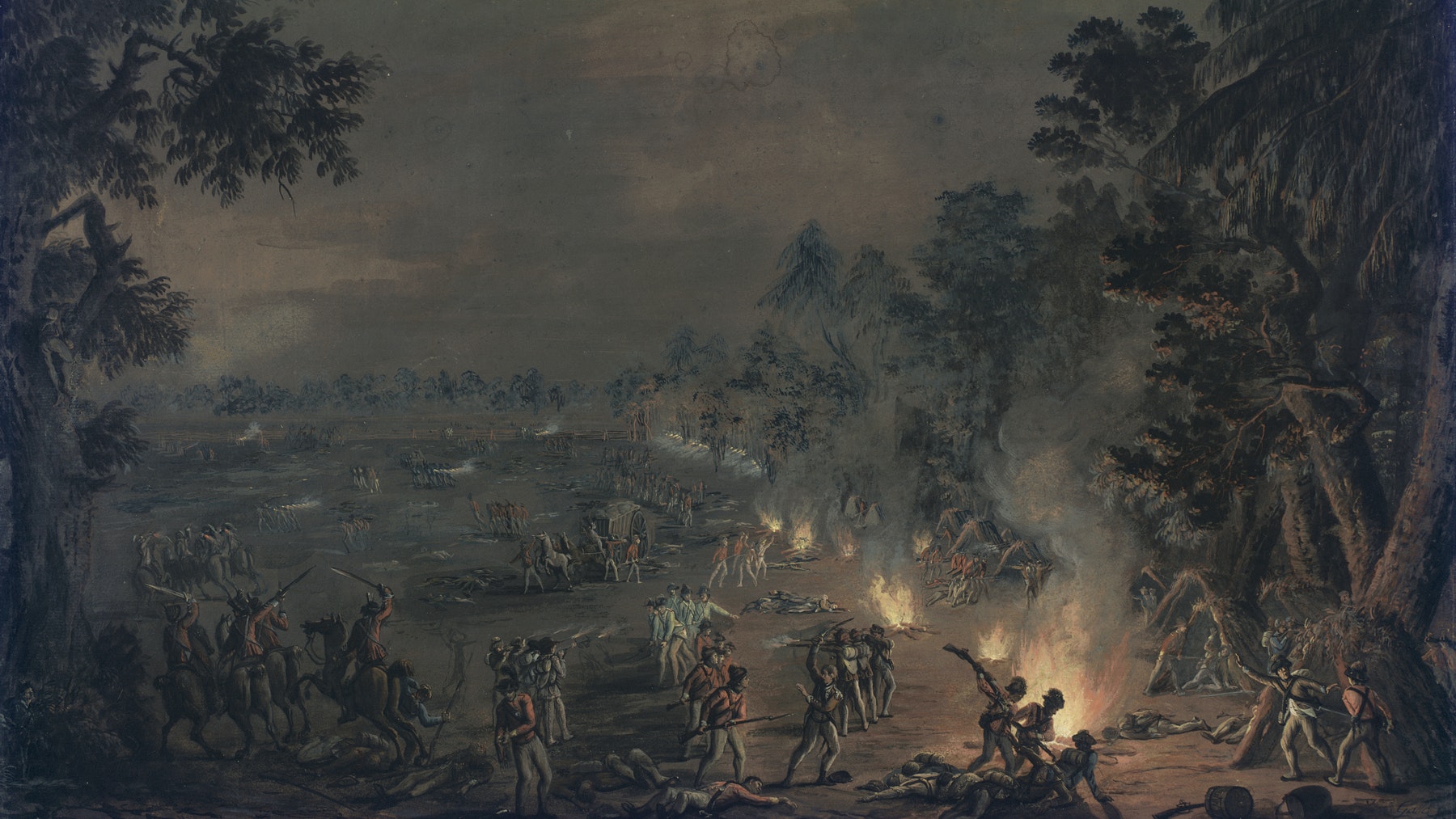 Battle of Paoli by Xavier della Gatta. Museum of the American Revolution 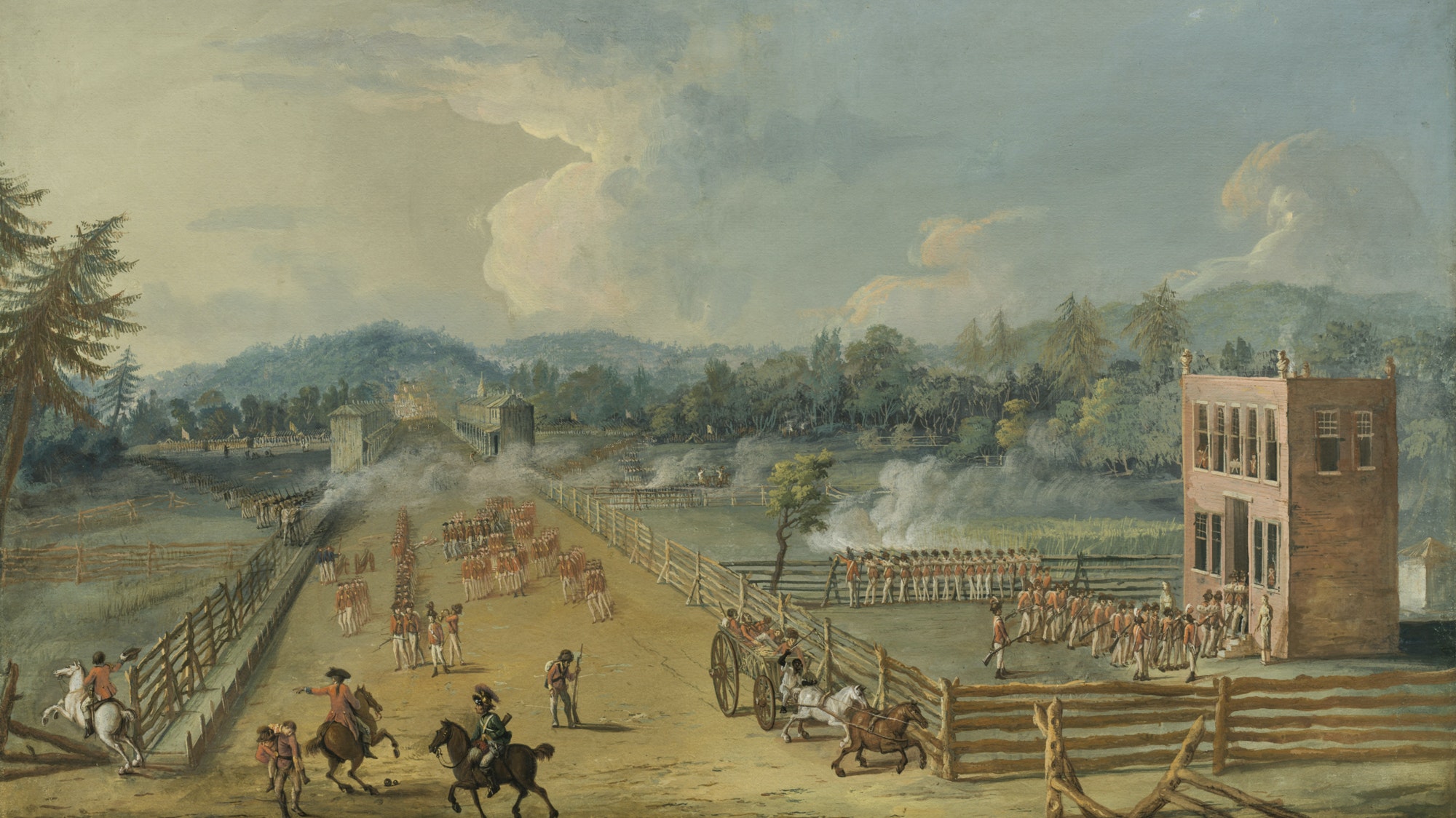 Battle of Germantown by Xavier della Gatta. Museum of the American Revolution

The paintings of Paoli and Germantown entered the collection of the Valley Forge Historical Society, the predecessor organization of the Museum of the American Revolution, in 1957. Mr. and Mrs. John M. Taylor of Villanova, Pennsylvania, donated them to the society. A few years prior, the paintings had been consigned to Sidney Sabin Gallery in London by a private English collector. Little more is known about their provenance. Since 1957, historians of the American Revolution have considered Xavier della Gatta’s paintings to be among the best representations of battle from the Revolutionary War in existence. The paintings first appeared in print in the 1958 publication The American Heritage Book of the Revolution. They have also been exhibited at the Valley Forge Historical Society and the Pennsylvania Academy of the Fine Arts.

Richard Mansergh St. George’s name first became associated with the paintings in the 1980s. At the time, a historian and teacher from Wisconsin named Stephen Gilbert began a detailed study of Xavier della Gatta’s paintings of Paoli and Germantown as part of his master’s degree. He identified the people depicted in the scenes and hypothesized that an eyewitness, probably a British officer from the 2nd Battalion of Light Infantry, helped to create the paintings. Two lieutenants from the 52nd Regiment’s light infantry company who were friends and fought at the battles, Richard Mansergh St. George and Martin Hunter were Gilbert’s prime suspects. Hunter appears in the foreground of the Paoli painting and wrote in detail about his experiences at Paoli and Germantown in his postwar memoir. St. George appears in the foreground of the Germantown painting being carried off the battlefield by a soldier in his regiment after being wounded in the head. In 1994 and 1995, Gilbert published his findings and theories in Military Collector & Historian, the journal of the Company of Military Historians.

Meanwhile, Irish and British art historians learned about Richard Mansergh St. George’s story from a different angle: the surviving portraits of him. Irish art historian Fintan Cullen’s article in The Burlington Magazine, “Hugh Douglas Hamilton: ‘painter of the heart’” (1983), and his book Visual Politics: The Representation of Ireland 1750-1930 (1997), are the earliest detailed studies of Hugh Douglas Hamilton’s portrait of St. George mourning at his wife’s tomb. Cullen sought to understand the timeline of St. George’s life and why he would commission such a portrait, which the National Gallery of Ireland purchased in 1992 from St. George’s descendants. Following up on Cullen’s research, British art historian Martin Myrone identified the National Gallery of Victoria’s Portrait of an Officer of the Fourth Regiment of Foot by Thomas Gainsborough as Richard Mansergh St. George. Myrone published his identification in a chapter on Henry Fuseli and Gothic Romance in his book Bodybuilding: Reforming Masculinities in British Art 1750-1810 (2005). Also following up on Cullen’s research, Irish art historian Ruth Kenny wrote about a self-portrait of Richard Mansergh St. George and noted St. George’s earlier “macaroni” cartoons that were published in London in 1772 and 1773. 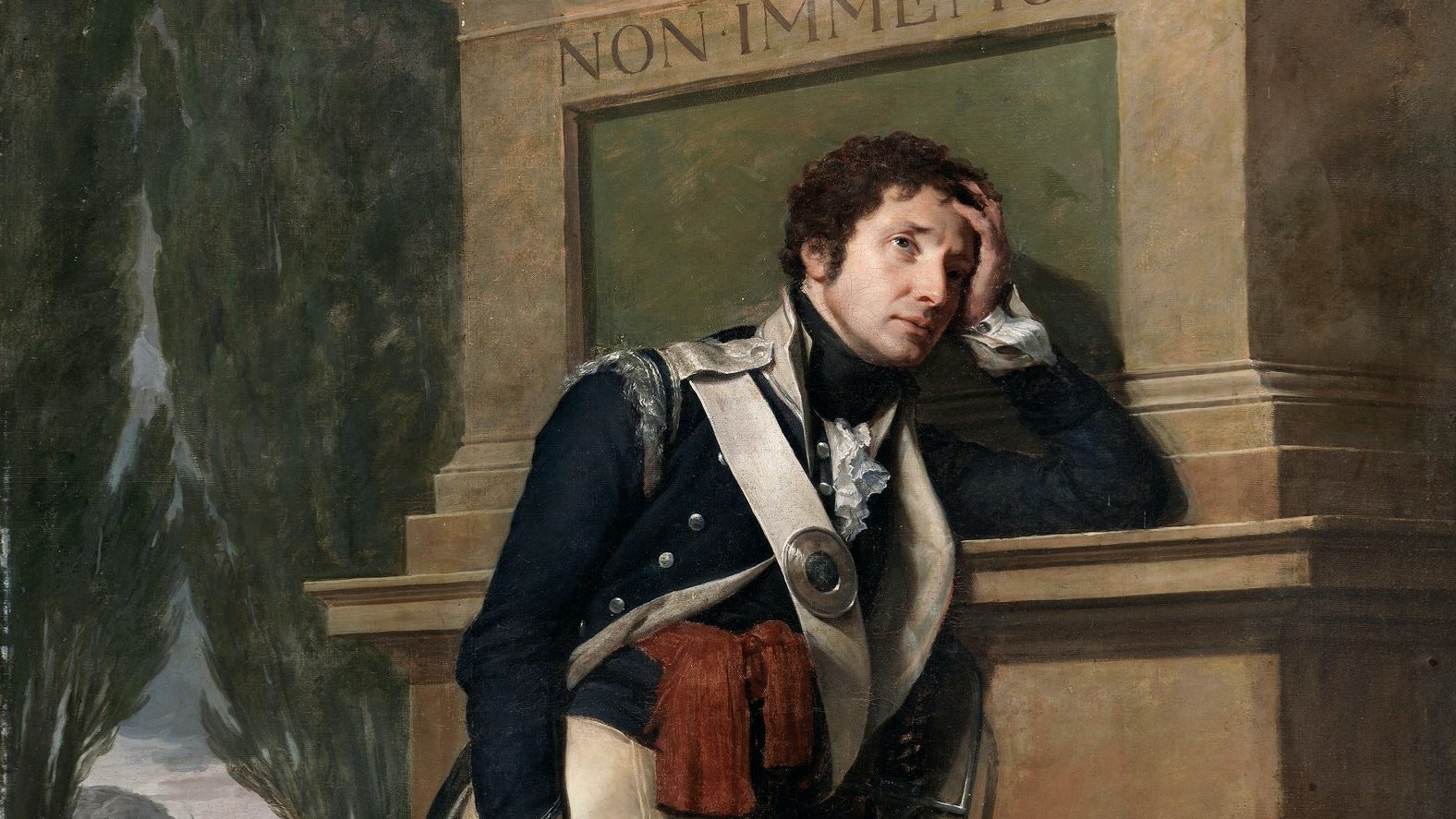 In 2007, new evidence surfaced to strengthen Richard Mansergh St. George’s connection to Xavier della Gatta’s paintings. Four sketches from the Revolutionary War appeared at auction at Sotheby’s in New York City. They depict vignettes from the perspective of a British light infantry officer, including one showing the officer with a head wound being transported to Philadelphia. Historians of the Revolutionary War quickly attributed the sketches to Richard Mansergh St. George because he created “caricatures” during the war and was wounded in the head at the Battle of Germantown. Those historians also compared the sketches to Xavier della Gatta’s paintings and an unattributed British cartoon titled A View in America in 1778 that depicts a British Army light infantryman. They immediately saw similarities. Certain features of St. George’s earlier “macaroni” cartoons also resembled the sketches and A View in America in 1778. This began to rule out the possibility of Martin Hunter’s involvement in the creation of the Paoli and Germantown paintings. But did St. George ever travel to Italy? Did he show Xavier della Gatta his sketches and share his memories of the battles? 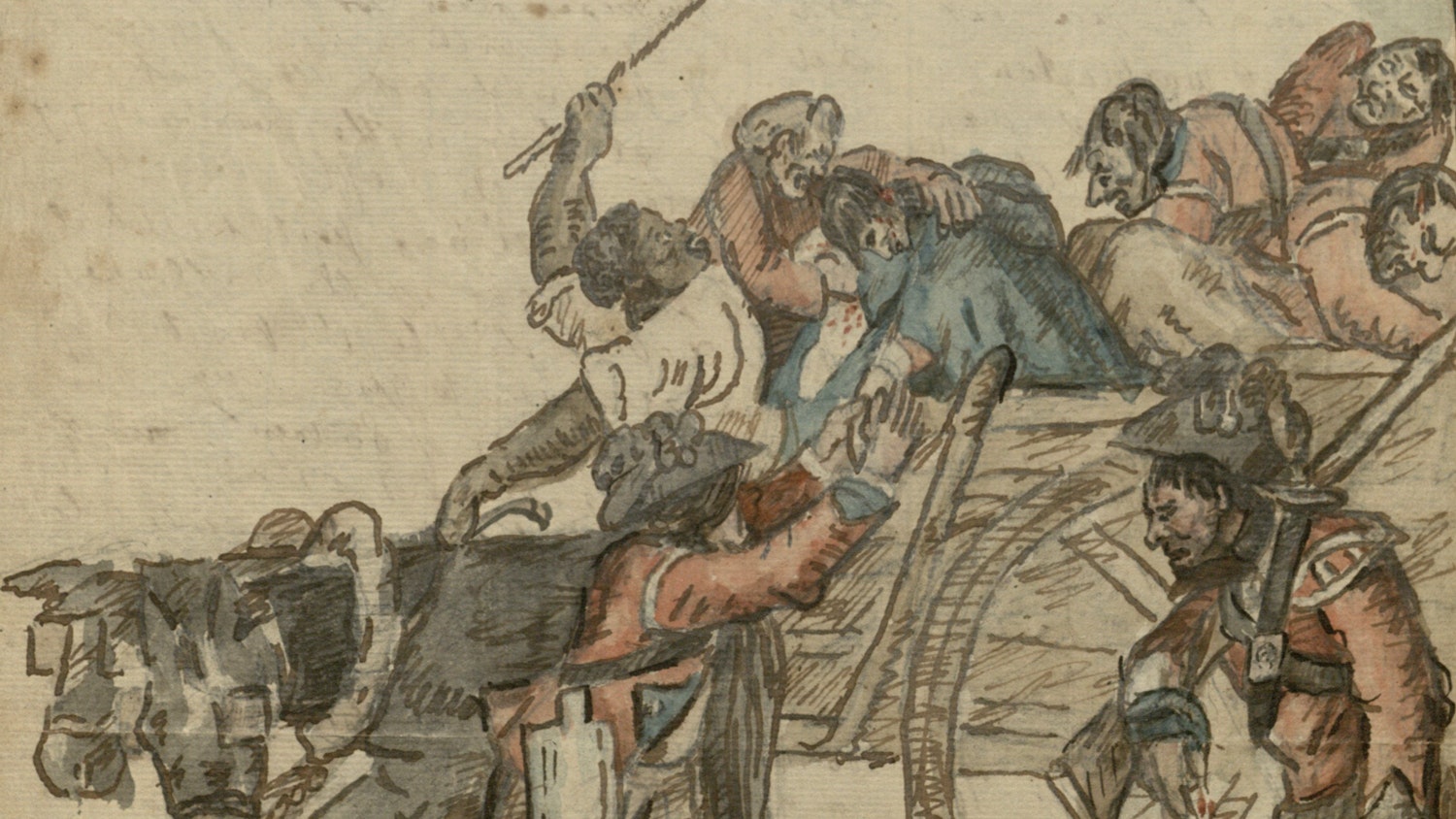 Richard Mansergh St. George’s self-portrait sketch “My Triumphant Entry into Philadelphia” is one of four of St. George’s wartime sketches that surfaced in 2007. Courtesy of the Harlan Crow Library, Dallas, Texas

By linking the previous scholarship of Stephen Gilbert, Fintan Cullen, Martin Myrone, and Ruth Kenny, while also studying St. George’s personal letters and postwar descriptions of him, the curatorial department at the Museum of the American Revolution confirmed that Richard Mansergh St. George did travel to Naples, Italy, in the 1780s and likely met with Xavier della Gatta. The arts, beauty, and warmth of the Italian coastal city made it an appealing destination for St. George. At the time, he was in the midst of traveling back and forth between mainland Europe, Great Britain, and Ireland in search of comfort for his head pain and to go on a gentleman’s “Grand Tour.” While visiting Naples, St. George viewed the famous archaeological sites of Herculaneum and Pompeii, which had been dug up in the 1740s. In one letter, he even wrote that he posed for a portrait while in Naples. St. George seems to have spent most of his time in Naples, but fellow tourists also remembered meeting him in Rome.

While we do not know the exact circumstances of St. George’s interactions with Xavier della Gatta, it is likely that St. George commissioned the paintings of Paoli and Germantown and brought them back to Ireland or England. Hopefully future research will reveal even more information about their encounter. Xavier della Gatta’s paintings can now be considered two of 22 known surviving works of art (cartoons, sketches, portraits in oil) that St. George created, helped create, or posed for. Together, they provide an incredible and personal visual record of one soldier’s journey through the Revolutionary era in America and Ireland.

Want to learn more about solidifying Richard Mansergh St. George’s connections to Xavier della Gatta’s paintings? Listen to this discussion hosted by Matthew Skic, the lead curator of Cost of Revolution: The Life and Death of an Irish Soldier.