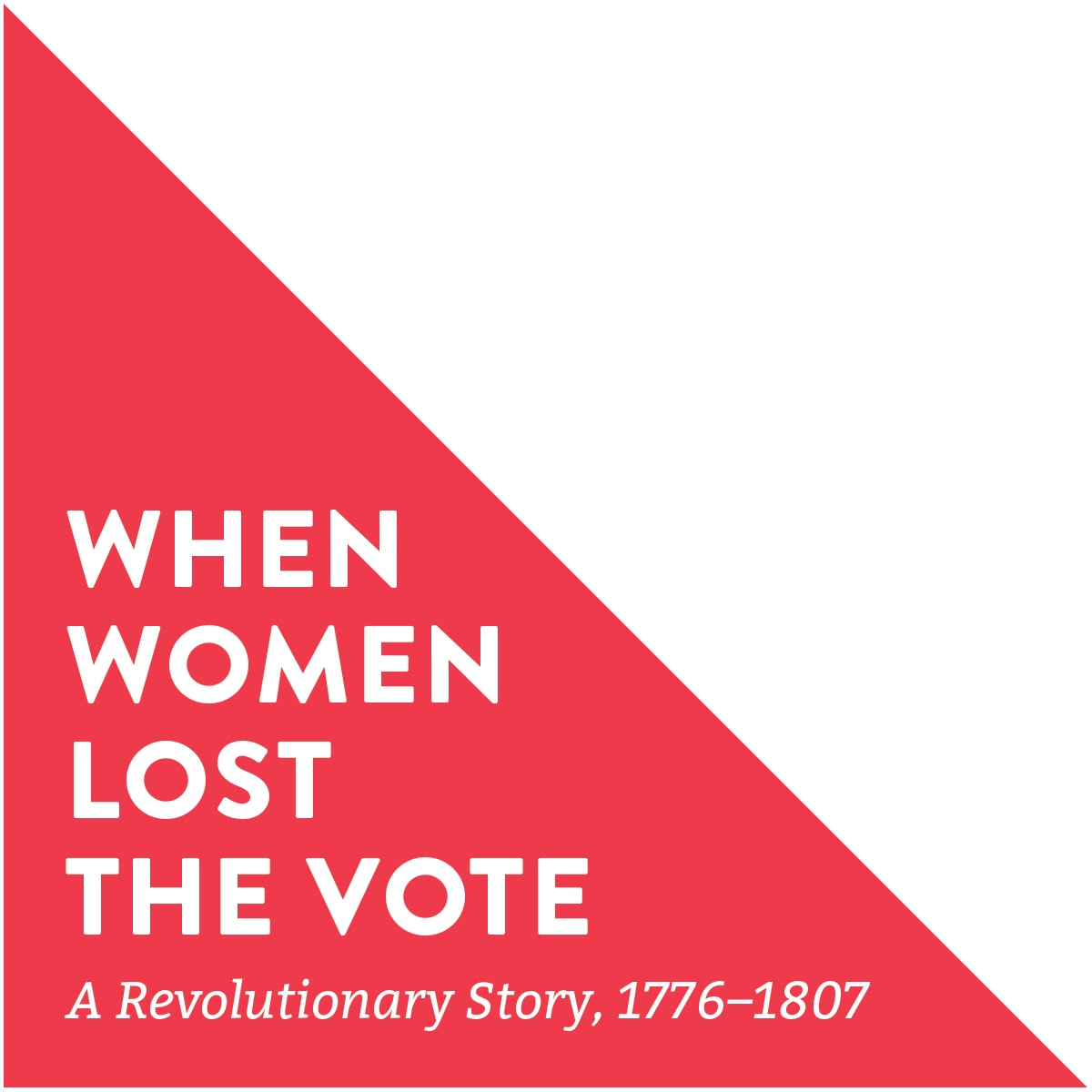 How Was the Vote Regained?

Redemption
Library of Congress, Prints and Photographs Division, Washington, D.C, Reproduction Number LC-USZ62-60964
By exercising the right to vote, early New Jersey women influenced the woman suffrage movement of the 19th and 20th centuries. These later suffragists used the memory of the Revolution and the nation’s first women voters to ground their position in America’s founding and assert their right to equal citizenship.  The story of early New Jersey’s women voters reminds us that progress is not necessarily linear and unending, but that rights and liberties require constant vigilance to preserve and protect. The suffragists of the 19th and 20th centuries fought to regain a right that had been taken from New Jersey women in 1807. This later activism vindicated the first generation of women voters and became part of these women voters’ legacy.

An Ongoing Revolution for Women

In the years after New Jersey barred women from the electorate, women activists in New Jersey and across the nation turned to educational initiatives to prepare young girls for future political participation. Many opened schools and female academies, which laid the groundwork for white women as well as some women of color, educated in these schools, to launch the middle-class reform movement of the 19th century.

This next class of educated women would become the next generation of women activists and suffragists.

The Church, the Bar, and the Senate are shut against us. Who shut them? Man; despotic man, first made us incapable of the duty, and then forbid us the exercise. Let us by suitable education, qualify ourselves for those high departments — they will open before us." 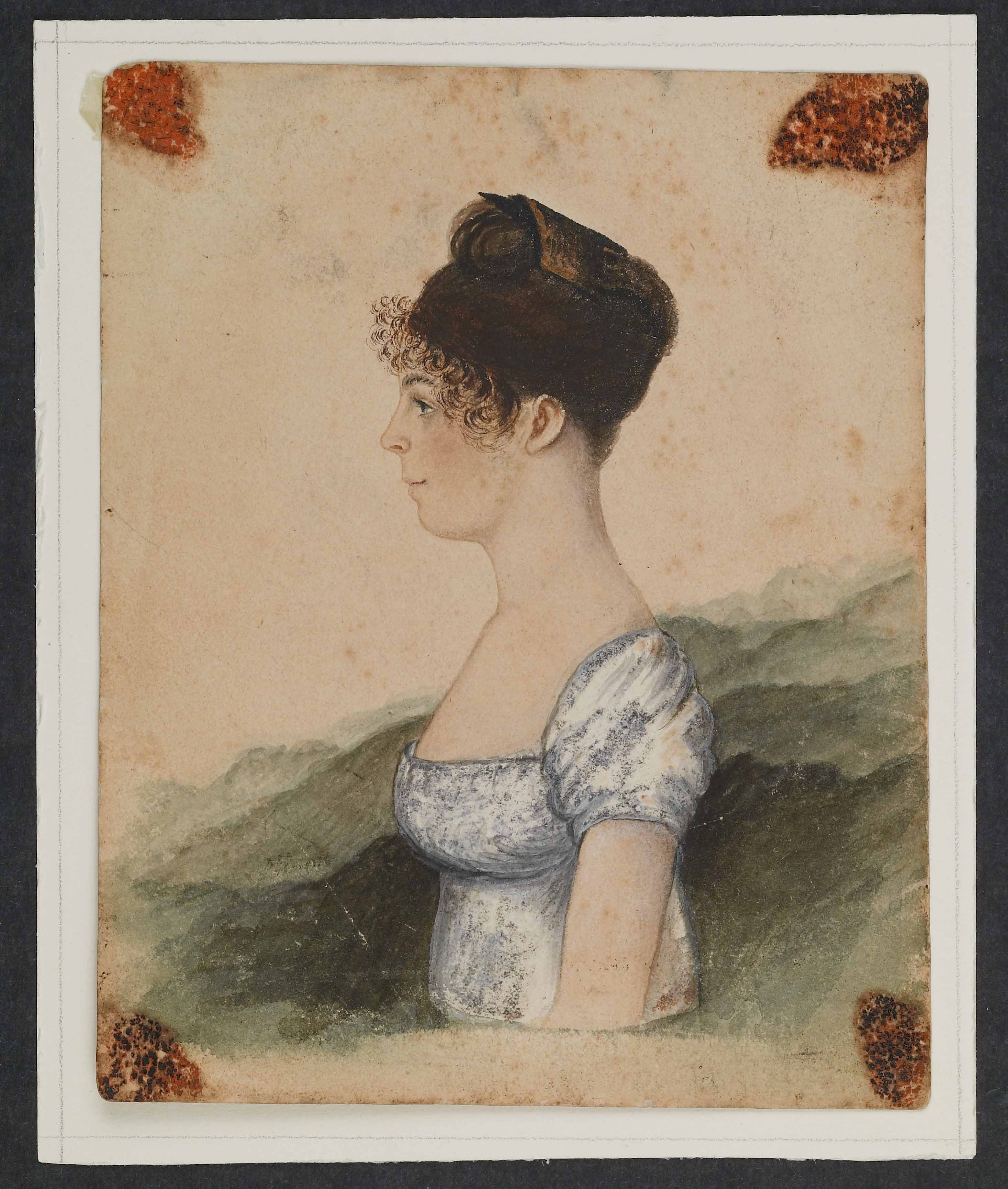 Some of the same women activists and authors that advocated for women’s rights in the 1790s, such as Judith Sargent Murray, Eliza Harriet O’Connor, Sara Pierce, and Susanna Rowson, opened schools to educate a new generation of women and keep them active in the public sphere.

Are we deficient in reason? We can only reason from what we know, and if opportunity of acquiring knowledge hath been denied us, the inferiority of our sex cannot fairly be deduced from thence…”

Judith Sargent Murray, “On the Equality of the Sexes,” 1790 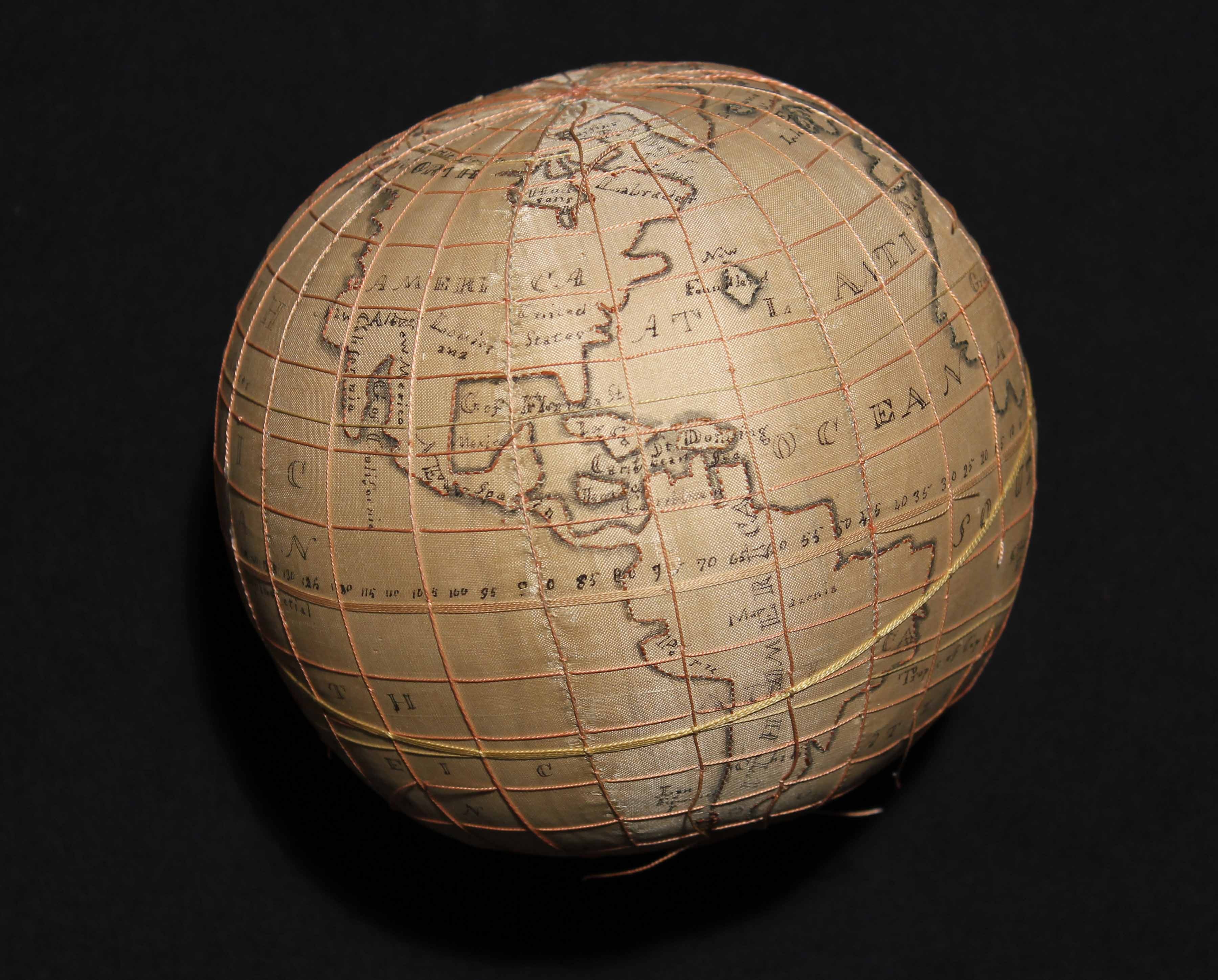 View object details
"Monmouth County Historical Association. Gift of Mrs. Stuart A. Young, Jr., 1975" Students at female academies made these samplers as part of their study of geography.

2 Objects
From the Collections of the Bergen County Historical Society This embroidery and pen and ink drawing demonstrate the fine artistic skills that young women learned at female academies.

This book cover belonged to Sarah Louisa Forten, who helped found the Female Philadelphia Anti-Slavery Society in 1833, the first non-segregated women's abolitionist organization. The rest of the book is now gone, but the cover bears Forten's name in a gilt stamp.

Our ‘skins may differ,’ but from thee we claim A sister’s privilege, in a sister’s name.” 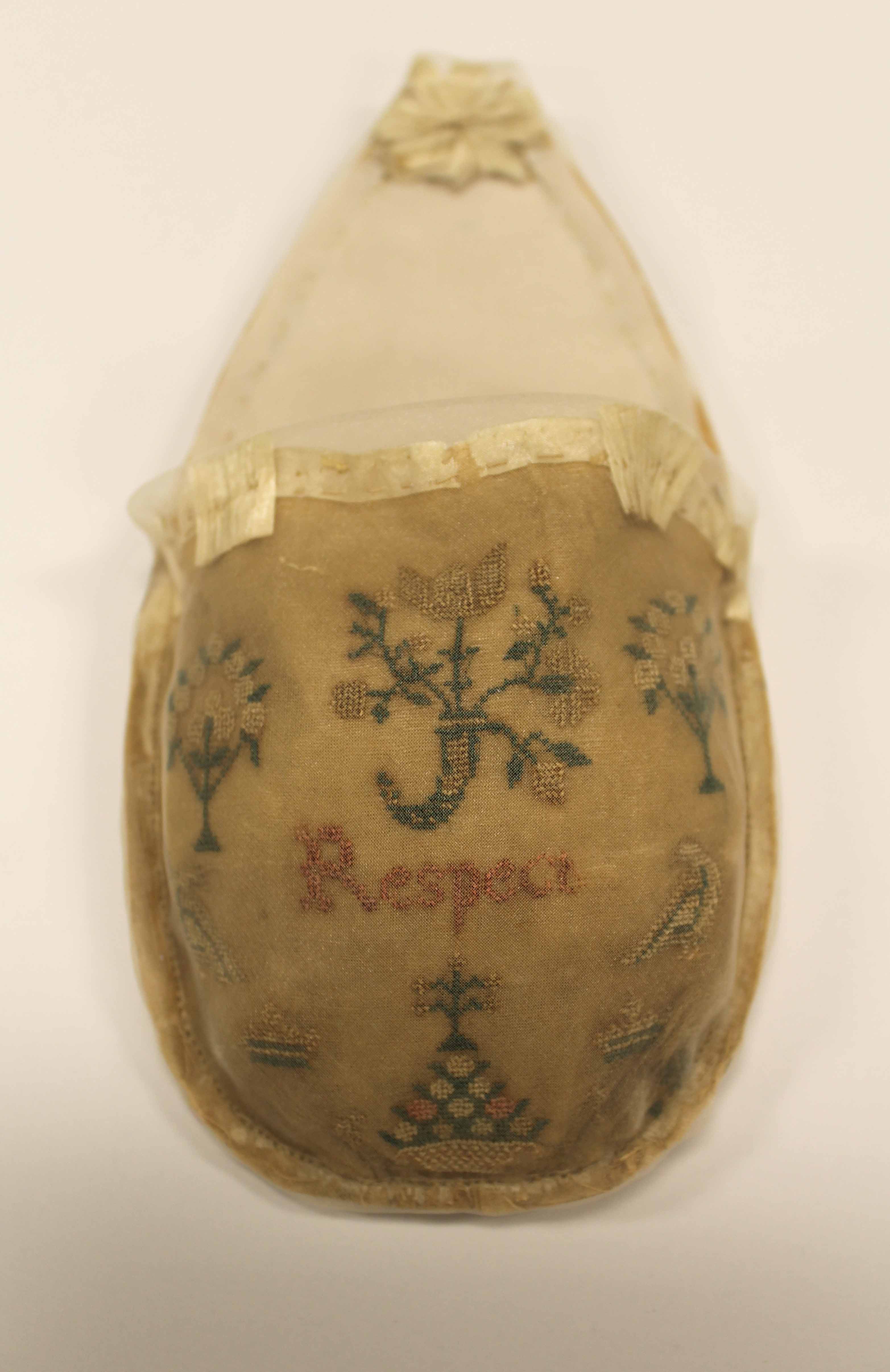 View object details
Courtesy of Independence National Historic Park Objects like this wall pocket were often made in girls’ schools by elite children learning refinement of taste and social values. 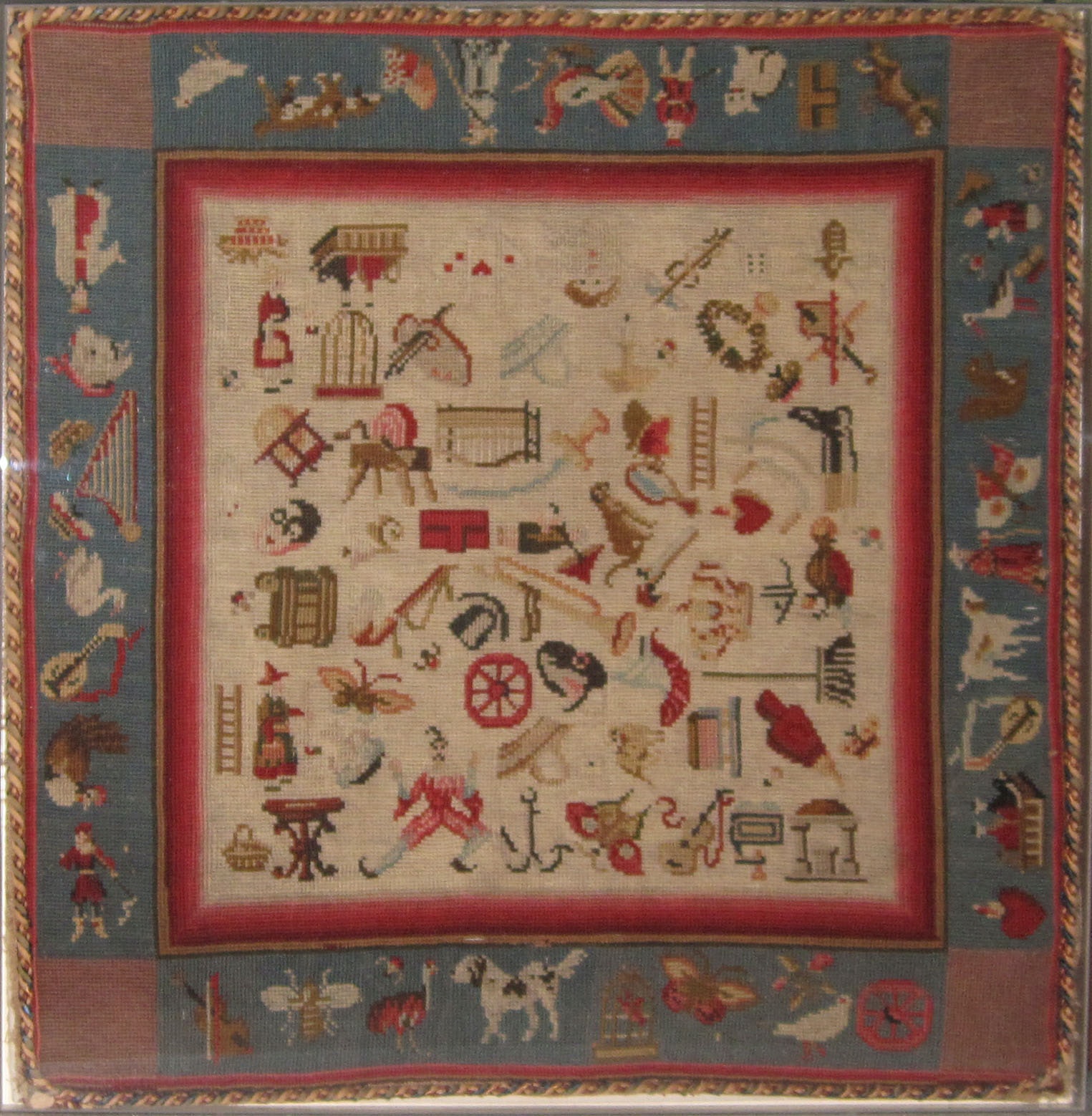 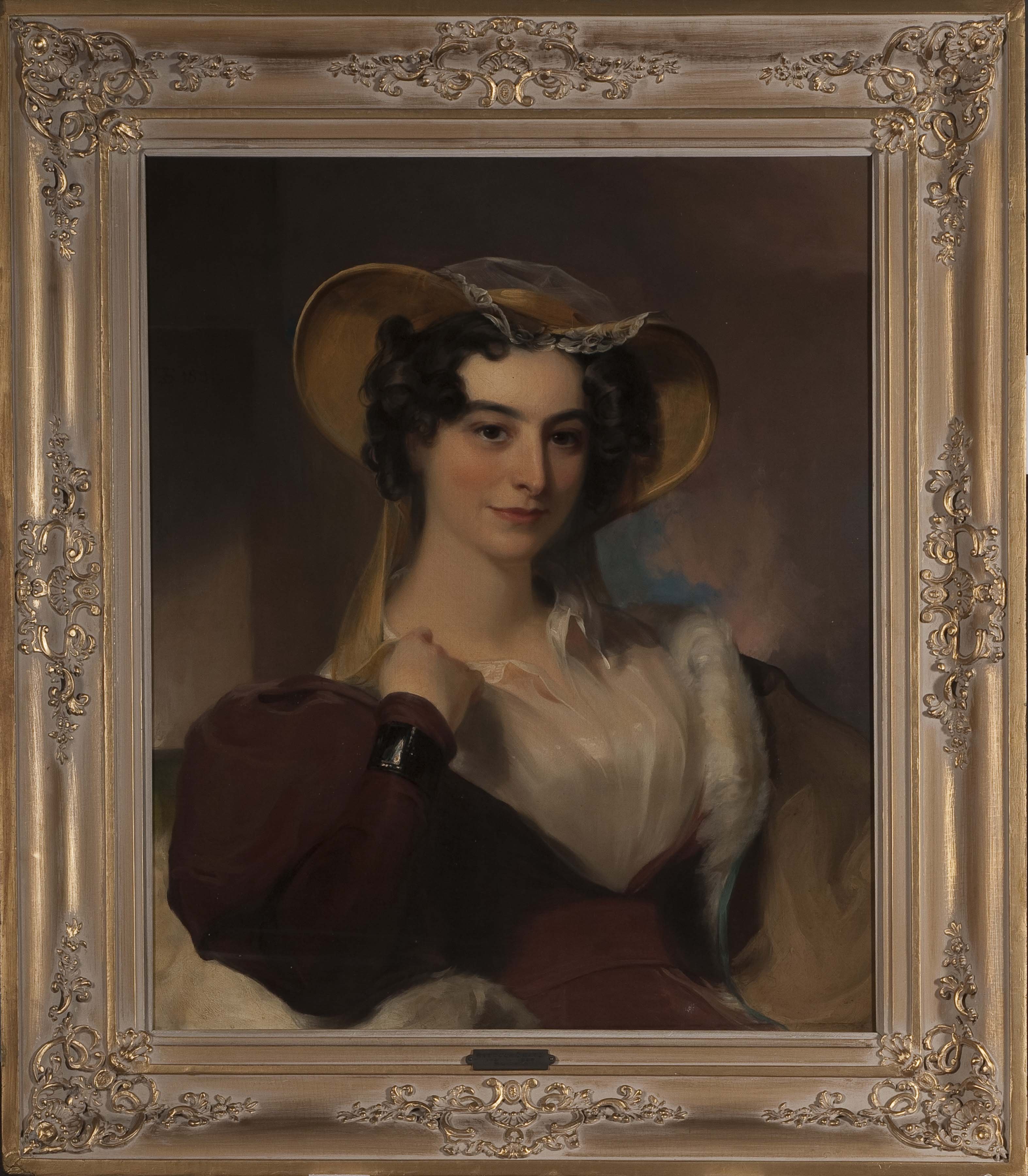 Rebecca Gratz started this needlepoint sampler at Philadelphia’s first Hebrew Sunday School, which she founded in 1838 and where she served as superintendent until 1864. Her work in education was part of her broader commitment to improving the lives of women and children in Philadelphia.

Votes for Women: The Next Generation

Decades after women in New Jersey lost the vote, women formed a middle-class reform movement to fight various social ills, including slavery, poverty, drunkenness, and the perceived threat of social disorder represented by immigration. As society’s self-proclaimed moral guardians, these early female reformers used activism as an opportunity to take on new roles, elevate their own status, and enter the public realm.

It was the women activists of this new generation that began fighting for women’s right to vote in the mid-19th century. 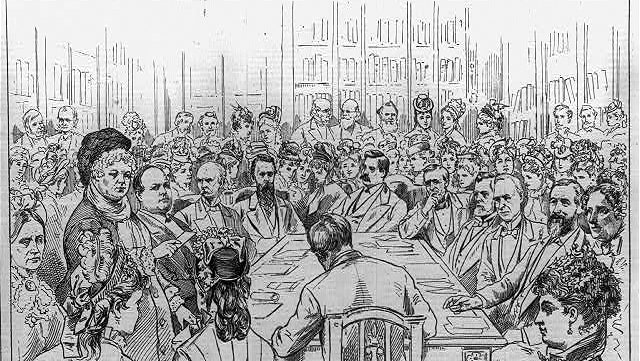 In New Jersey, the example of women voters in the Early Republic became an inspiration for suffragists at the local, state, and national levels. Suffragists Elizabeth Cady Stanton, Lucy Stone, and Portia Gage maintained that, by exercising their right to vote, early New Jersey women set a precedent for women voting in the state.

It was this foundation that laid the groundwork for New Jersey suffragists’ activism, like when 172 New Jersey women — including women of color — led a voting demonstration in Vineland in 1868, or when Elizabeth Cady Stanton attempted to vote in Tenafly in 1880.

New Jersey suffragists showed that women’s participation in voting in early New Jersey did not end with the loss of the vote in 1807, but rather those earlier events became a rallying cry decades later. They emphasized the benefit of returning to a more inclusive and democratic political system. 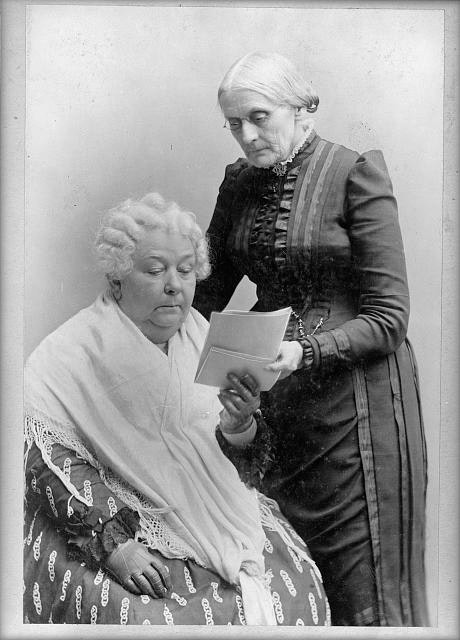 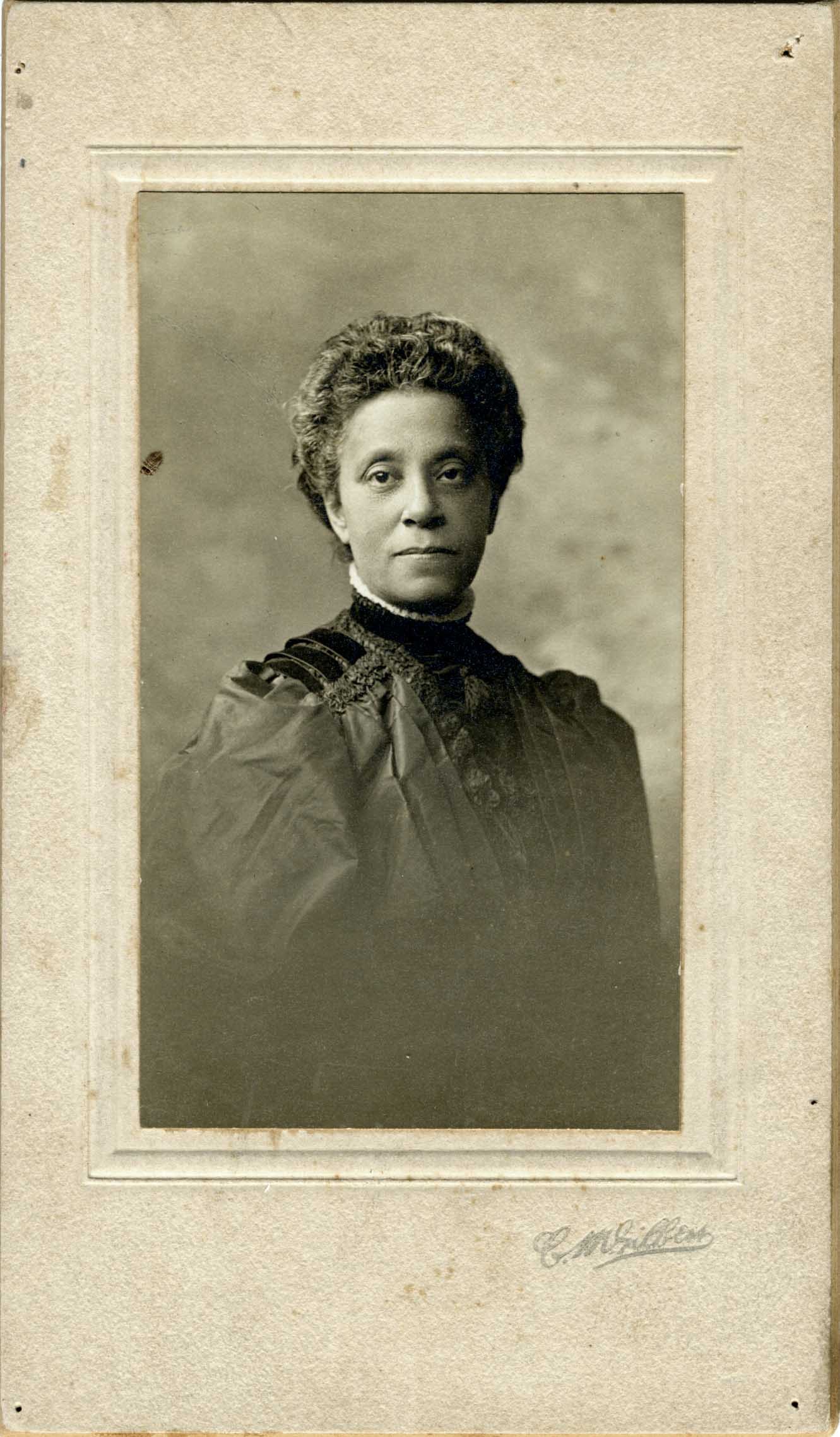 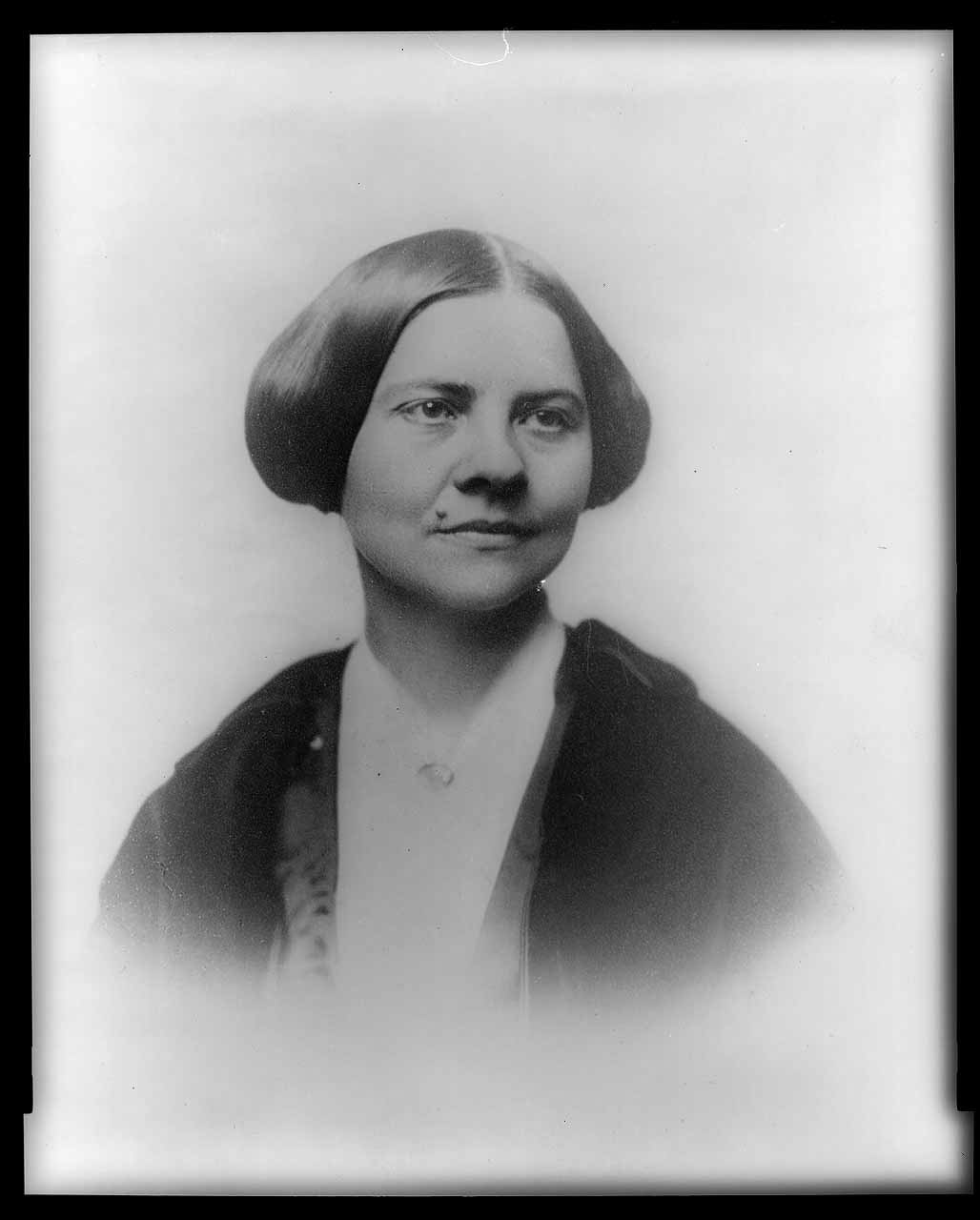 Women voted. Yet no catastrophe, social or political, ensued. Women did not cease to be womanly. They did not neglect their domestic duties. Indeed the noble character and exalted patriotism of the women of New Jersey all through the Revolution have been the subject of historical eulogy.” 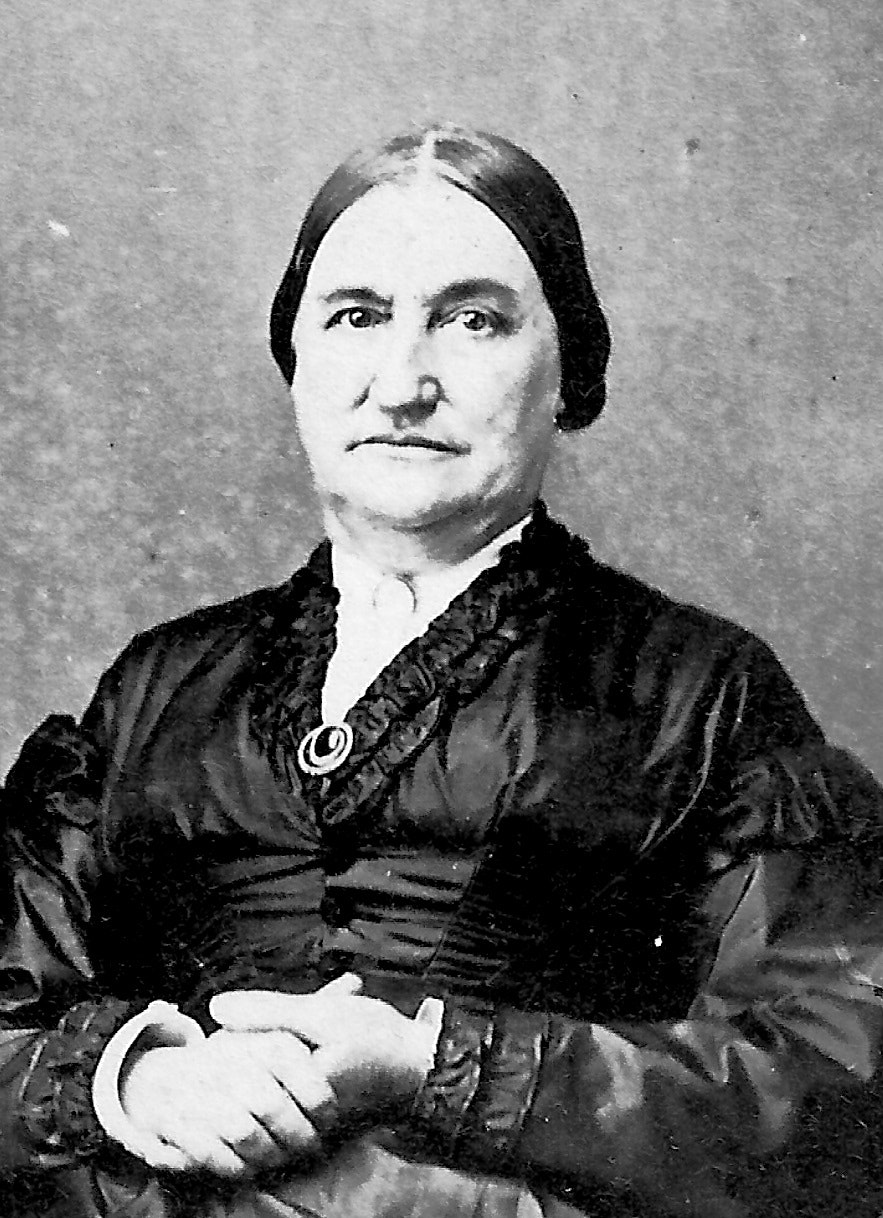 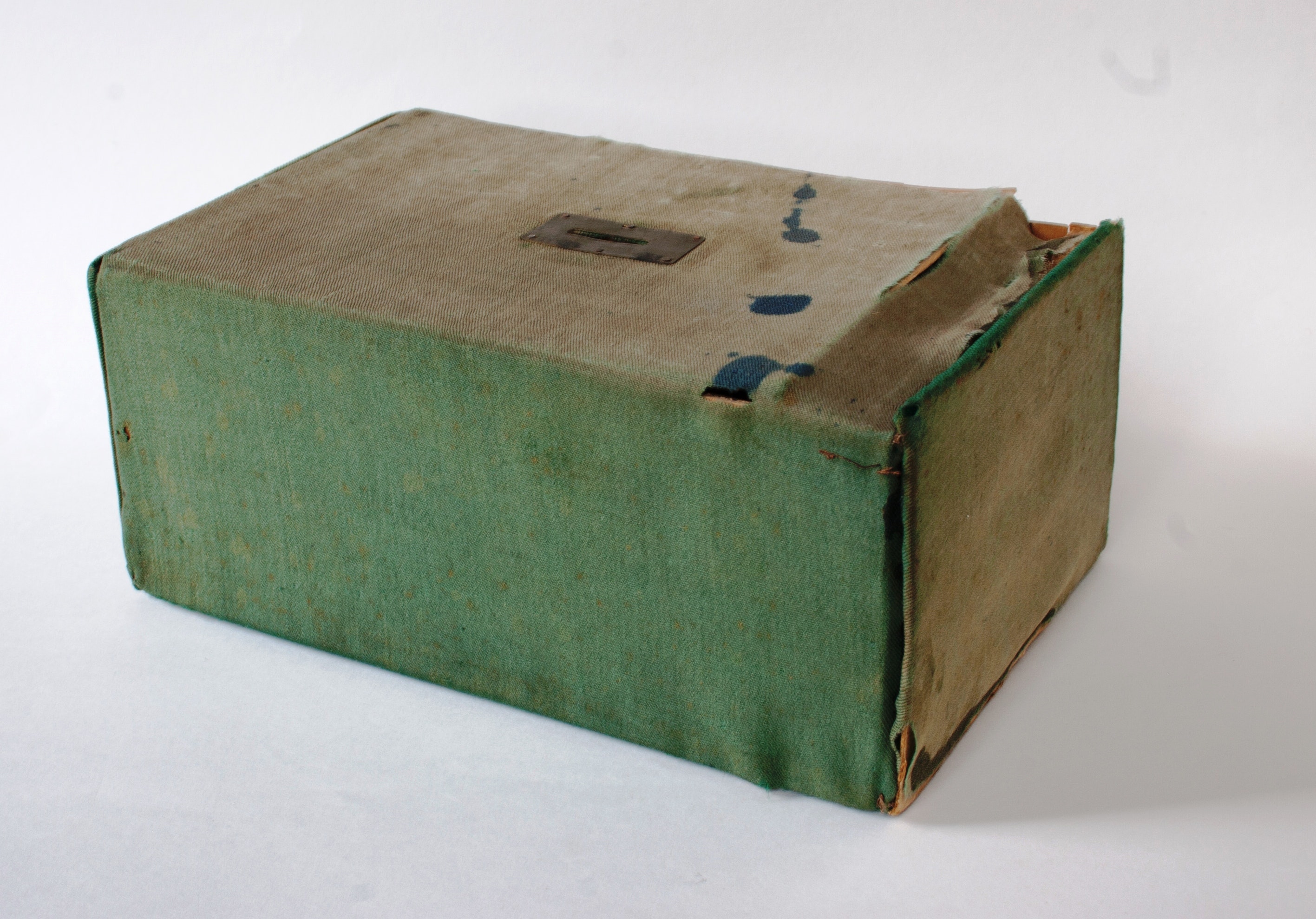 It was not until 1852 that New Jersey’s legislature passed the Married Women’s Property Act granting married women rights to their own property separate from their husbands.

In 1858, Lucy Stone became one of the first women to refuse to pay her property taxes when she returned her unpaid tax bill in Orange, New Jersey. She claimed she was not represented in her government. Stone’s calls for “no taxation without representation” echoed those of the Revolutionary era while simultaneously reinvigorating married women’s calls for their right to own property under femme coverture.

Women and suffragists throughout the nation followed Stone’s example.

Women suffer taxation and yet have no representation, which is not only unjust to one half of the adult population, but is contrary to our theory of government.” 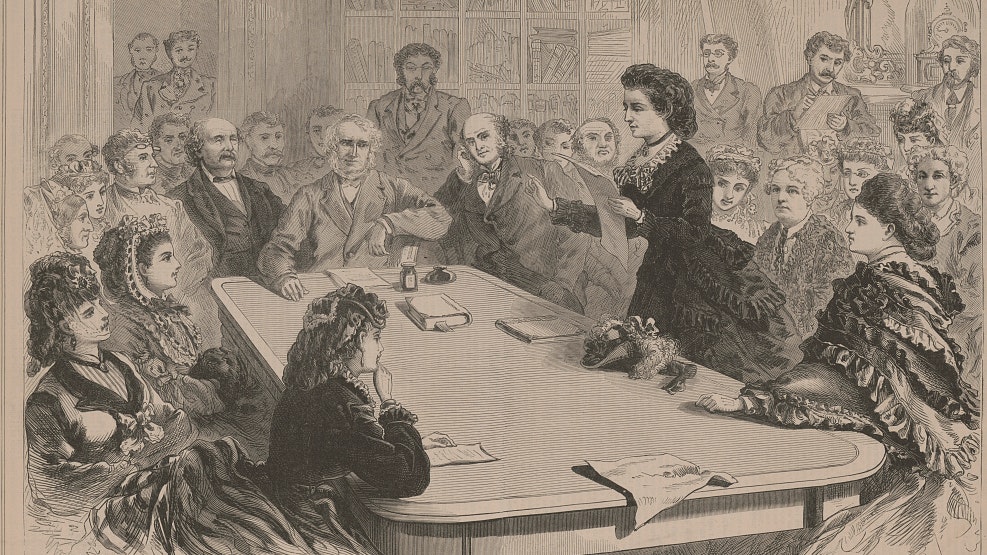 Race and the Suffrage Movement

In the formative years of the women’s rights movement, suffragists Susan B. Anthony and Elizabeth Cady Stanton collaborated with a diverse group of women, including African Americans. But during the debates over the 15th Amendment (1870), they openly withdrew their support for Black male suffrage, believing that the proposed amendment betrayed women by prioritizing the vote for Black men.

This caused a schism in the women’s rights movement between Stanton and Anthony’s National Woman Suffrage Association (NWSA), formed in 1869, and Lucy Stone and Julia Ward Howe’s American Woman Suffrage Association (AWSA), which maintained support for the 15th Amendment. The split in organizations has led to critiques of Stanton and Anthony for excluding African Americans from the suffrage movement.

“The Judiciary Committee of the House of Representatives receiving a deputation of female suffragists, January 11th -- a lady delegate reading her argument in favor of woman's voting, on the basis of the Fourteenth and Fifteenth Constitutional Amendments,” Library of Congress Prints and Photographs Division Washington, D.C Reproduction Number LC-DIG-ppmsca-58145 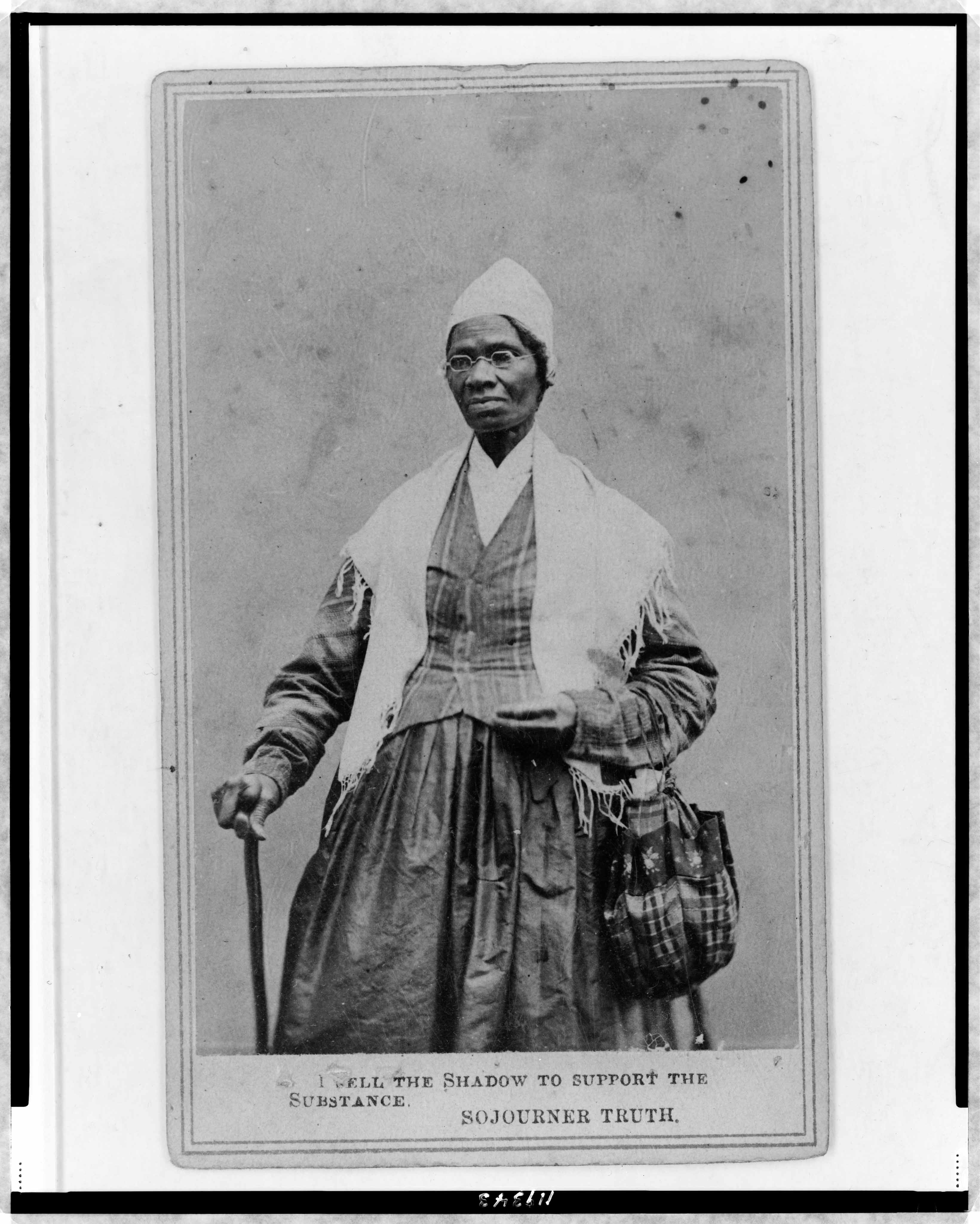 In 1867, Sojourner Truth gave an address at the First Annual Meeting of the American Equal Rights Association. In it, she advocated for Black women to have equal rights as Black men, including the right to vote. If they did not, she argued, Black men would continue to have control over Black women.

…and if colored men get their rights, and not colored women theirs, you see the colored men will be the masters over the women, and it will be just as bad as it was before. So I am for keeping the thing going while things are stirring; because if we wait till it is still, it will take a great while to get it going again.”

I will cut off this right arm of mine before I will ever work or demand the ballot for the Negro and not the woman.”

Susan B. Anthony to Frederick Douglass, 1866

…the influence and vote of an educated woman are of more value to a government than those of an ignorant man.”

As Black male suffrage and the 15th Amendment began to take precedence over women’s suffrage, Stanton and Anthony pushed the belief that people of color were less educated and less qualified to vote than educated white women. Their new agenda did not result in the overturn of the passage of the 15th Amendment, but it did change the nature and composition of the woman suffrage movement. 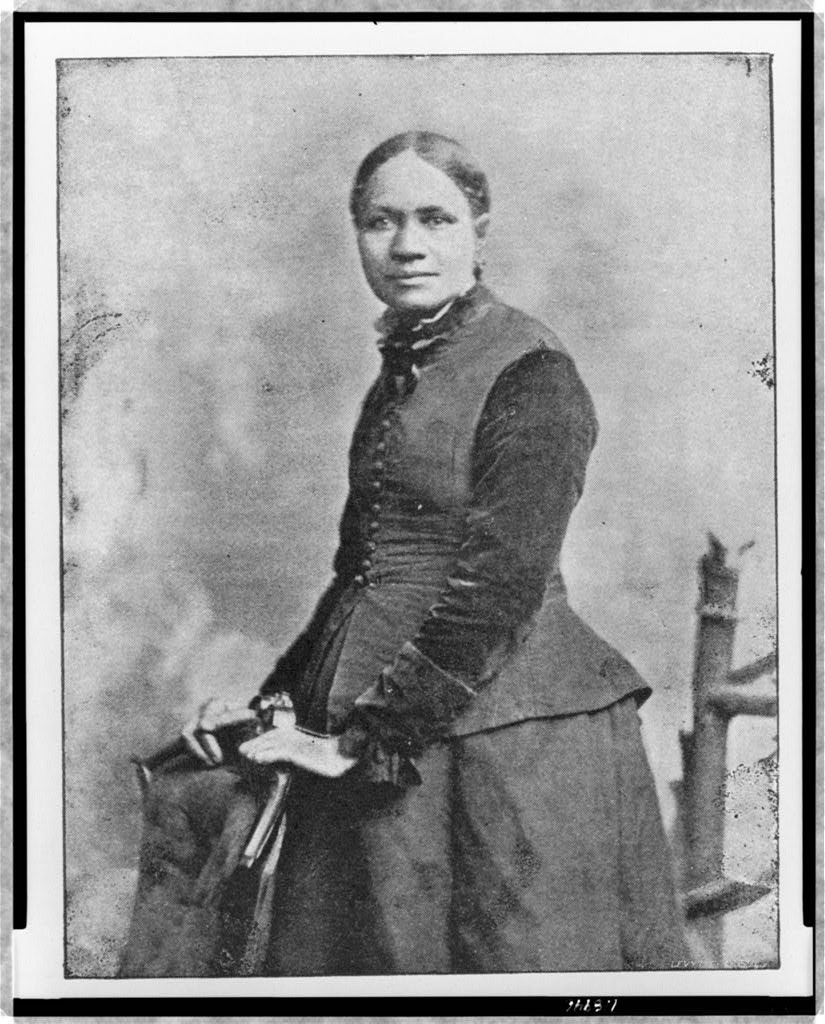 You white women speak here of rights. I speak of wrongs...I tell you that if there is any class of people who need to be lifted out of their airy nothings and selfishness, it is the white women of America.”

Frances Ellen Watkins Harper, “We Are All Bound Up Together,” 1866

Evoking the Memory of the Nation’s Revolutionary Women

Suffragists in the 19th century recalled the memory of the Revolution and early American women voters in their fight for women’s suffrage.

They demanded the right to own property and have representation in government, reviving calls of “no taxation without representation.” They wrote a Declaration of Sentiments, paraphrasing words from the Declaration of Independence that “all men and women are created equal.” Some suffragists even referenced women voters in New Jersey from 1776 to 1807 as a justification for voting as freeholders and property owners.

On July 4, 1876, members of the National Woman Suffrage Association (NWSA) staged a protest at the Centennial Celebration in Philadelphia. Despite being denied participation in the Centennial’s programming, suffragists interrupted the reading of the Declaration of Independence at Independence Hall to read their own “Declaration of the Rights of Women.”

As early as the 1840s and 1850s, reformers, activists, and writers began elevating women from the American Revolution. Historian and author Elizabeth Ellet published the first history of women in the American Revolution in 1848, introducing figures like the legendary “Molly Pitcher” and over a hundred other women that made contributions during the Revolutionary War. Ellet’s work did not include any women of color. 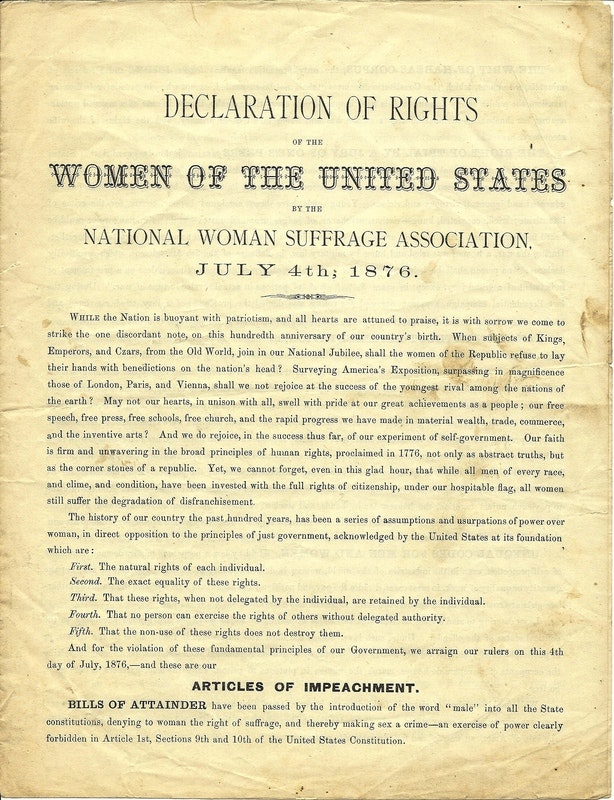 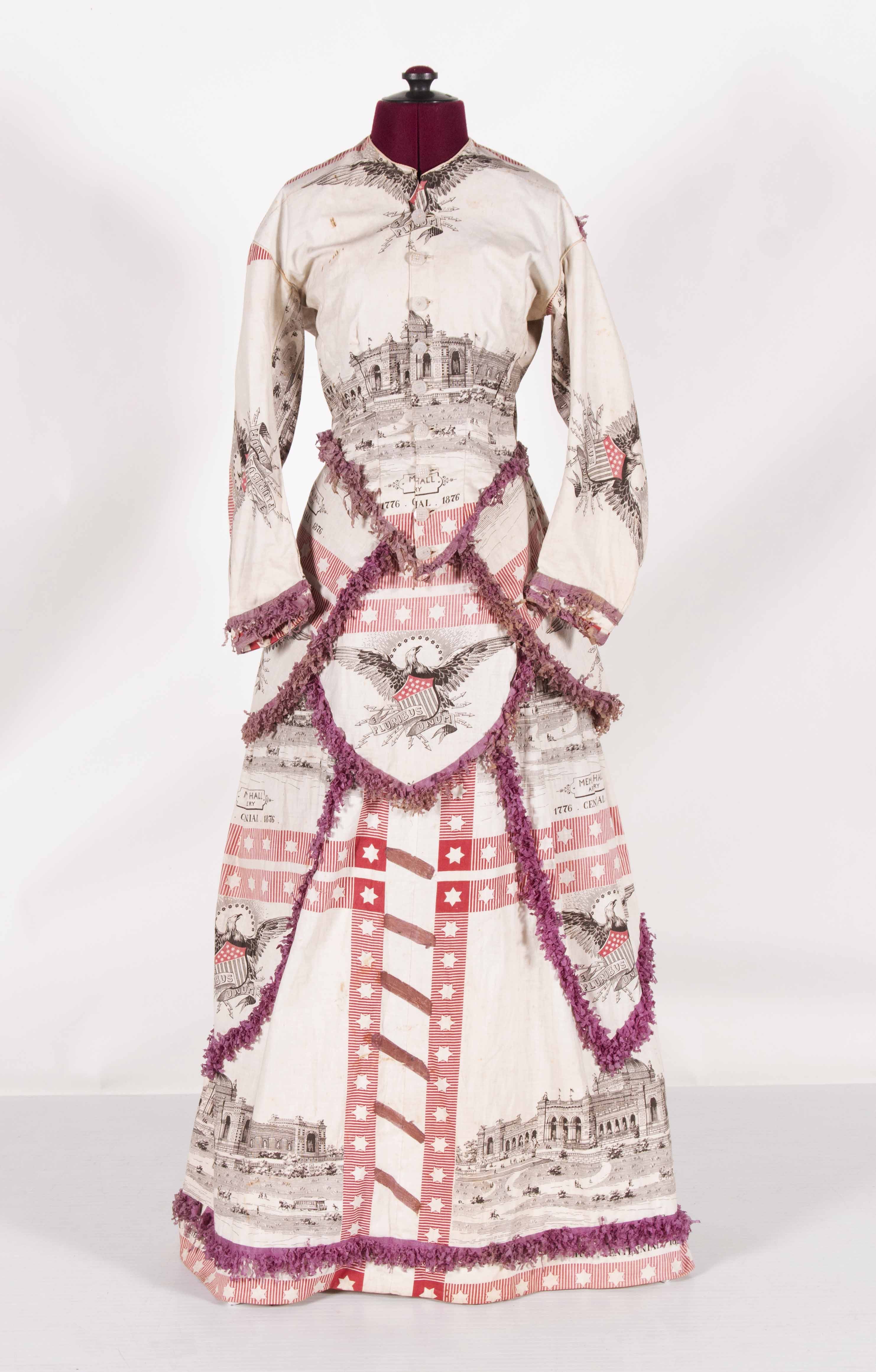 2 Objects
The 1876 Centennial Celebration in Philadelphia

While some suffragists, like Elizabeth Cady Stanton and Lucretia Mott, chose to boycott the 1876 Centennial Celebration, others, like Susan B. Anthony, Matilda Joslyn Gage, and other NWSA members, took separate action. As the reading of the Declaration concluded, Anthony stormed the stage and presented their “Declaration of the Rights of Women” while others passed out copies to the crowd. Anthony then recited the declaration outside of Independence Hall.

We ask justice, we ask equality, we ask that all the civil and political rights that belong to citizens of the United States, be guaranteed to us and our daughters forever.”

Susan B. Anthony, “Declaration of Rights of the Women of the United States,” July 4, 1876 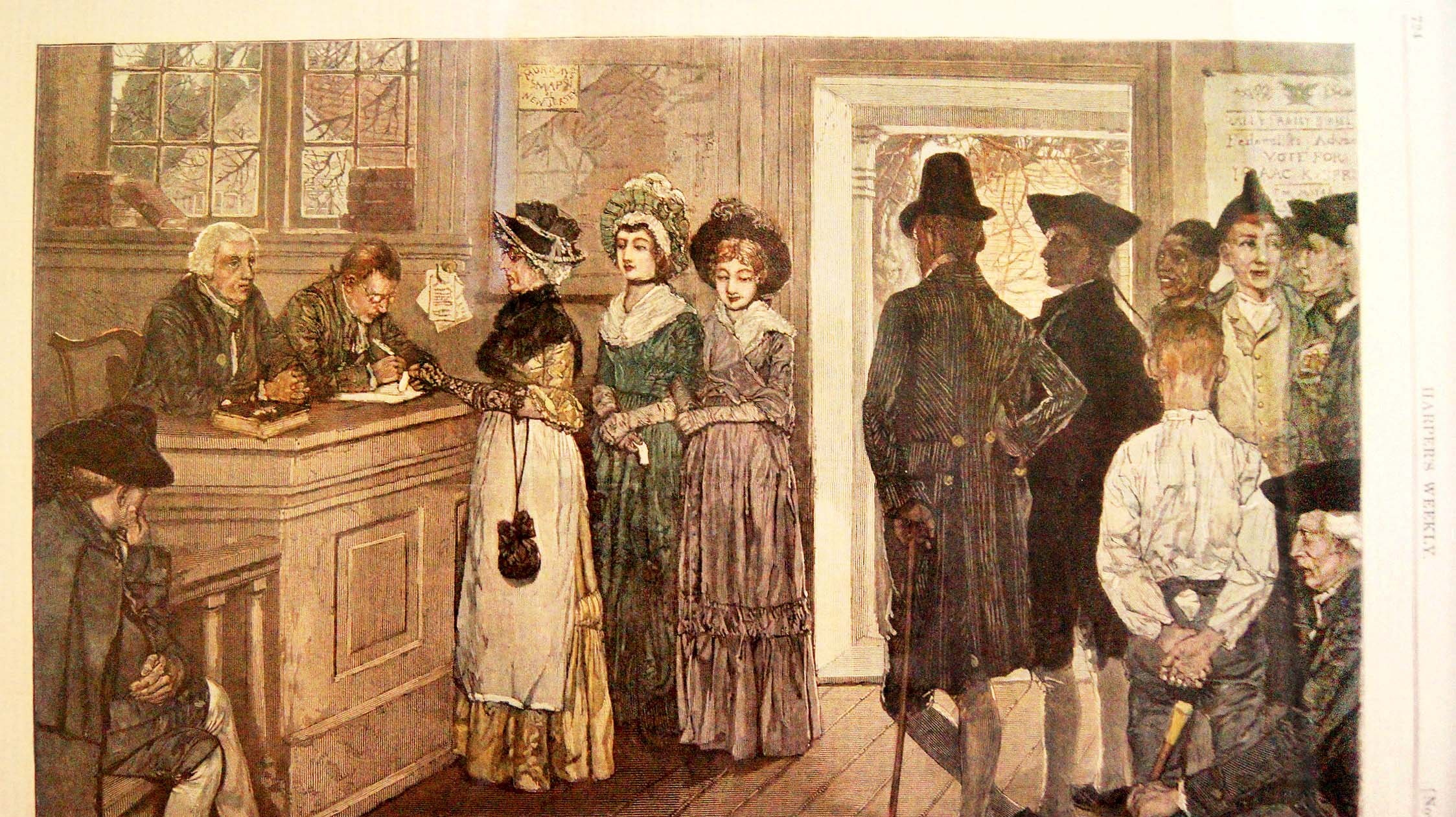 In 1880, Elizabeth Cady Stanton attempted to vote in her hometown of Tenafly, New Jersey. In her published account of the event, she referenced early women voters in New Jersey as a precedent for woman suffrage.

“Women at the Polls in New Jersey in the Good Old Times,” Collection of Ann Lewis and Mike Sponder 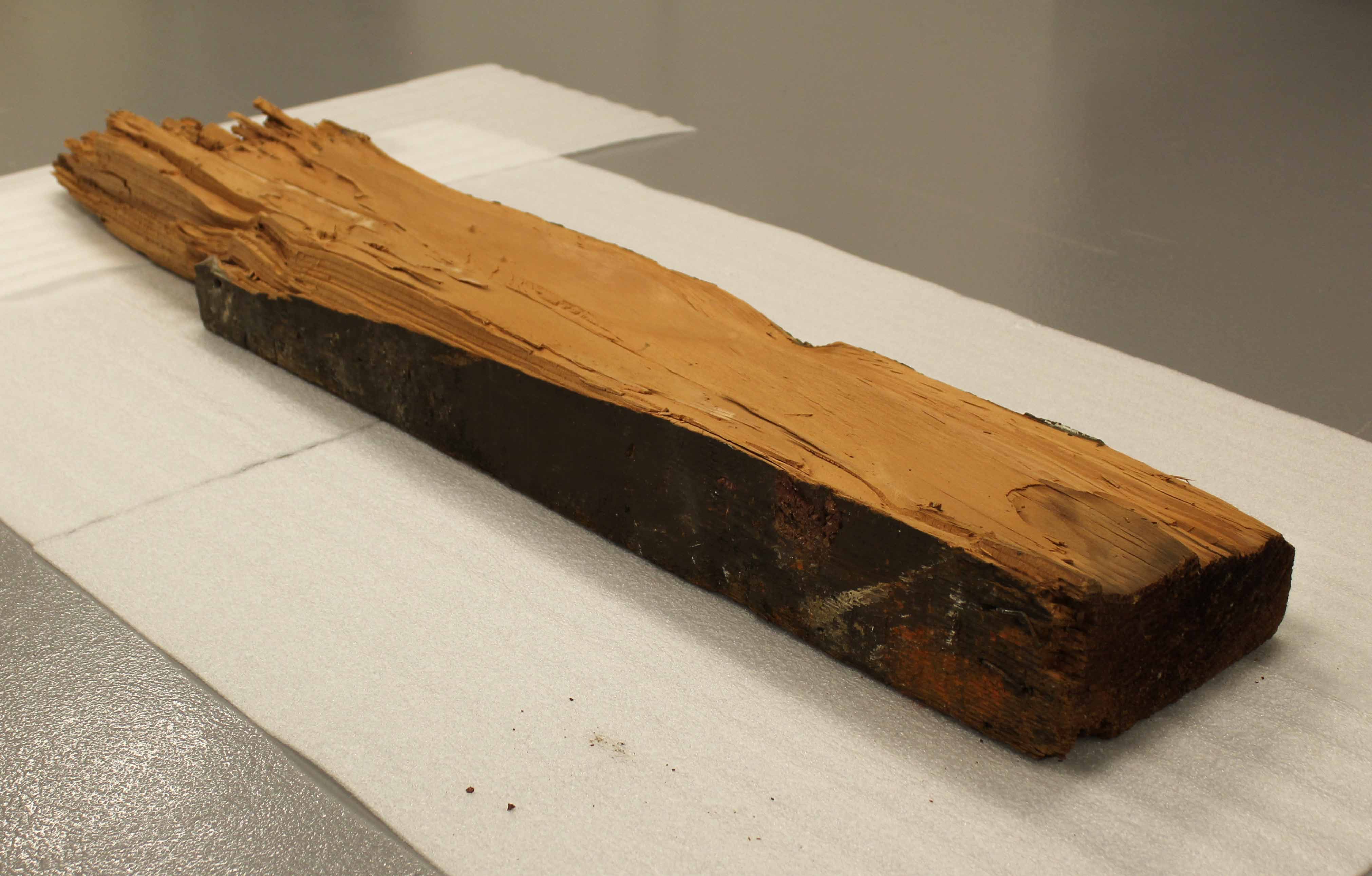 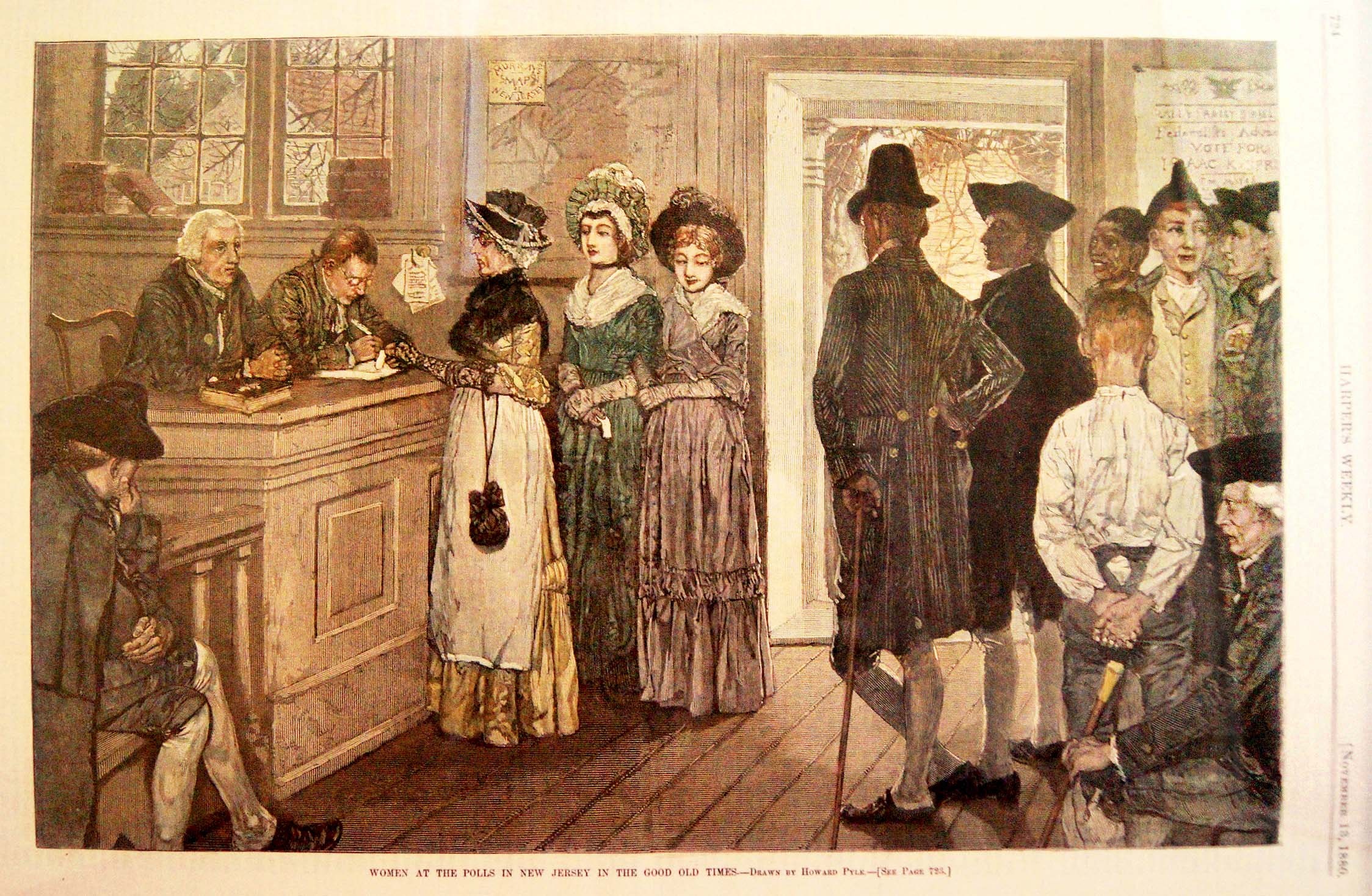 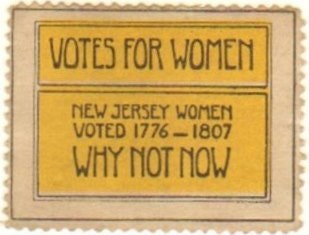 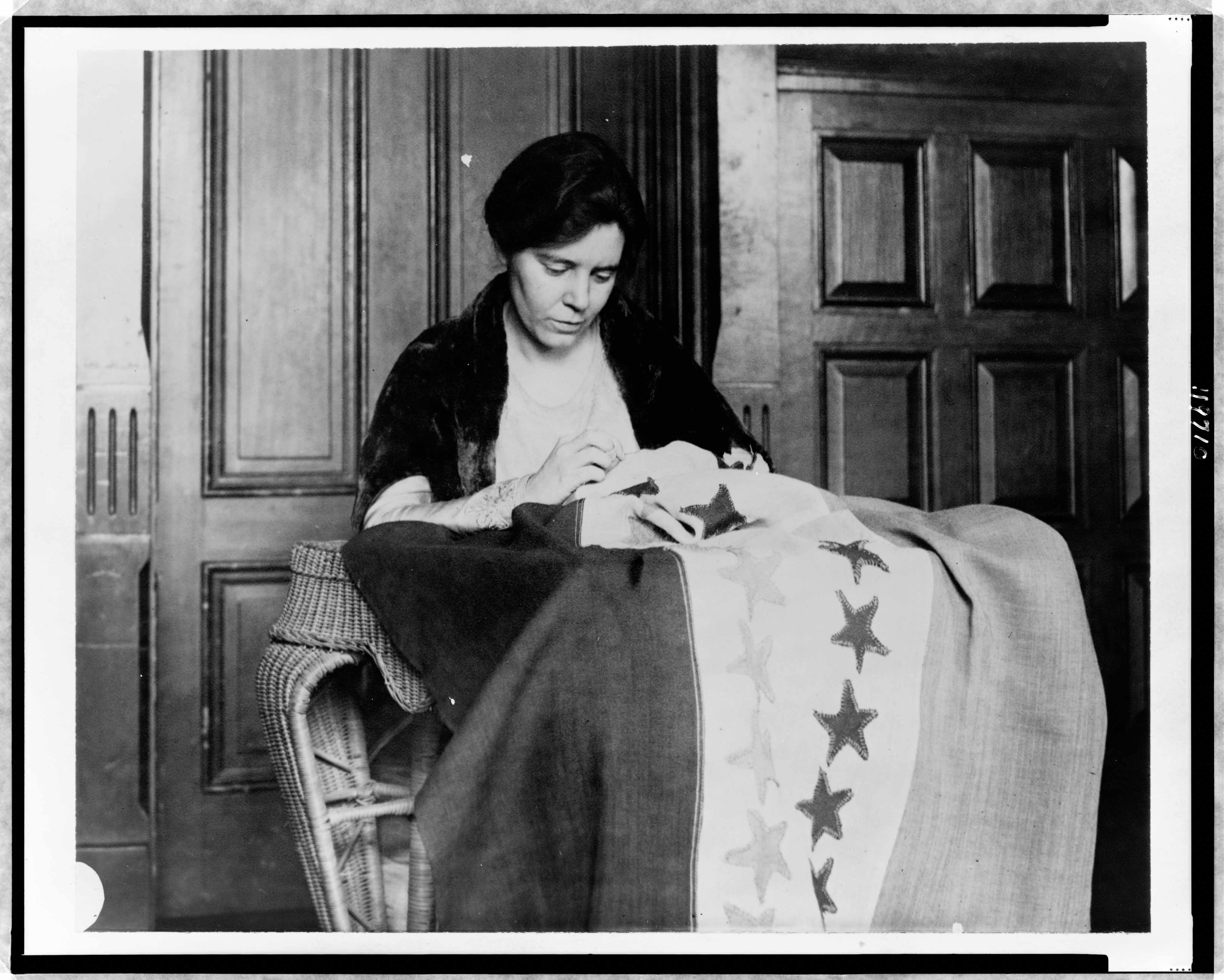 American women gained the right to vote nationally on August 26, 1920, with the passage of the 19th Amendment. Prior to 1920, 15 states passed state referendums giving women the right to vote.

The anti-suffrage movement sought to prevent women from gaining the vote in New Jersey and across the nation throughout the late 19th and early 20th centuries. Women — as well as other minority groups — were up against these challenges, and yet they continued to fight for equality. 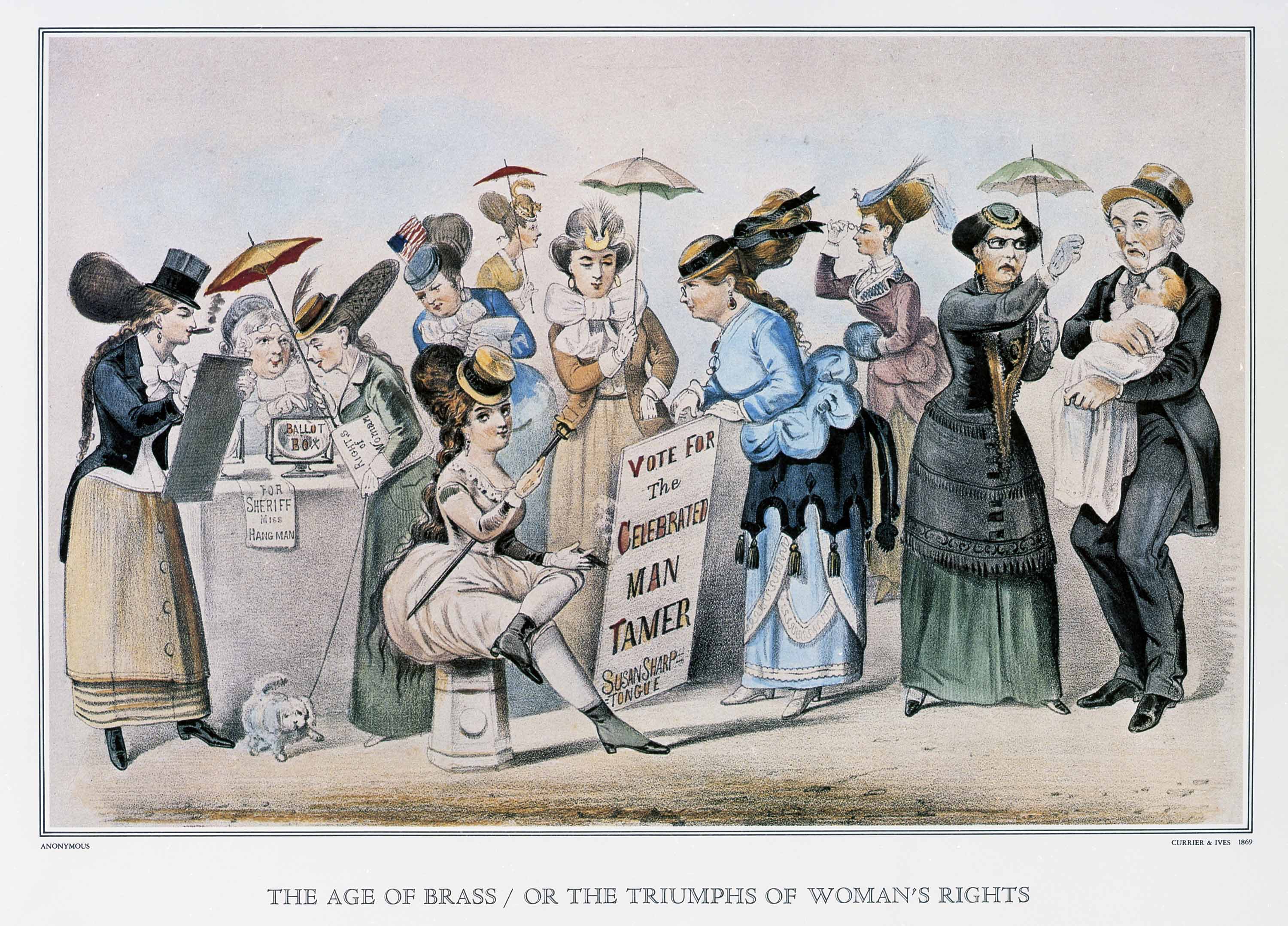 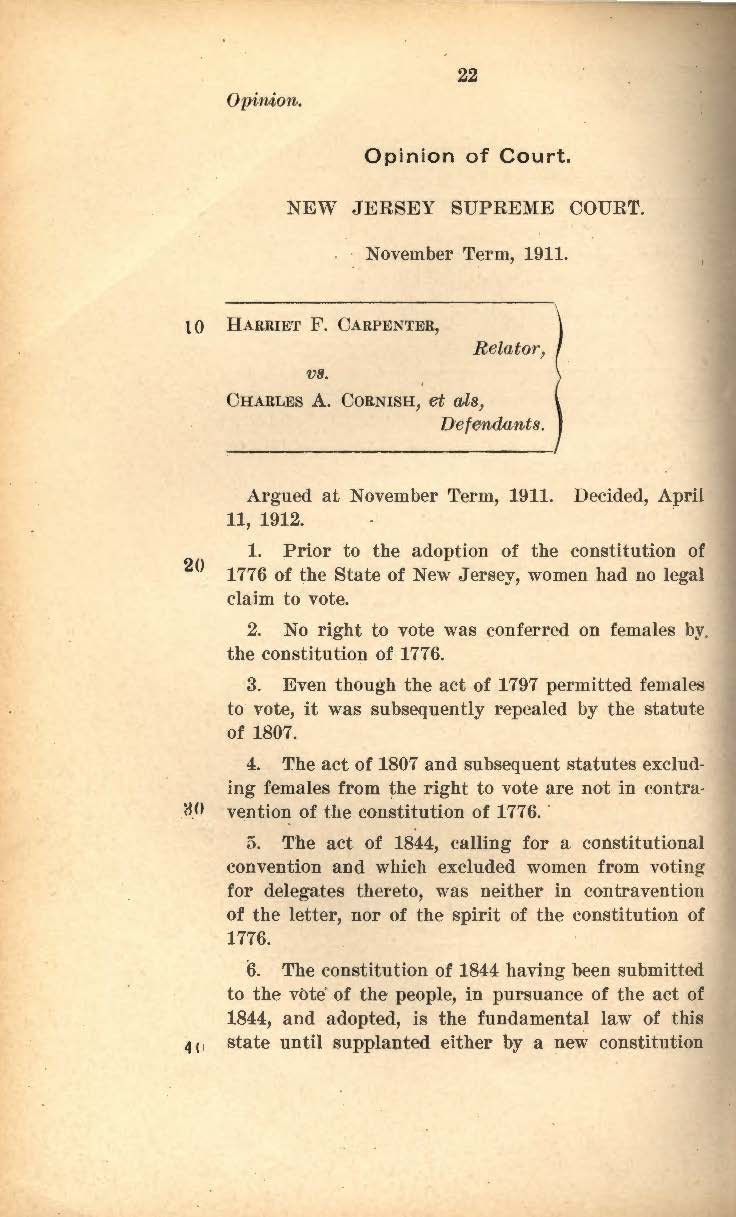 Women voters were convicted of committing these frauds…Does this go to prove that women’s votes will purify politics?”

The Ongoing Challenge of Democracy

Still today, women, people of color, immigrants, and other people throughout the United States face voter suppression efforts and accusations of voter fraud.

The story of the early women voters in New Jersey, and women’s fight to regain that right to vote nearly a century later, teach us that voting rights are fragile — they can be taken away. It is our duty as citizens to ensure that these rights are secured and protected for all American citizens in the ongoing effort to fulfill the promise of the American Revolution and to build a more perfect union.