There were only three state constitutions from 1776 to 1790 — Georgia until 1789, South Carolina, and Virginia — that defined voters as “white.” By 1807, Delaware, Maryland, Ohio, and New Jersey were added to that list.

Between 1776 and 1807, New Jersey’s State Constitution used the gender-neutral pronoun “they” and did not include racial categories in its election law. This opened the electorate to any man or woman, Black or white, that could meet the property, residency, and age requirements.

Free people of African descent could and did vote in New Jersey before 1807. Poll lists, however, rarely record whether a voter was Black or white. In fact, only one of the nine known pre-1807 New Jersey poll lists discovered by the Museum explicitly identifies a Black voter — Ephraim Hagerman of Montgomery Township, Somerset County, in October 1801. Tax lists from the 1790s confirm that Hagerman was a free person of color, but they also show that the value of his property does not appear to have met the 50 pound property requirement needed to vote. It is possible that his payment of taxes, regardless of the value of his property, qualified him to vote. 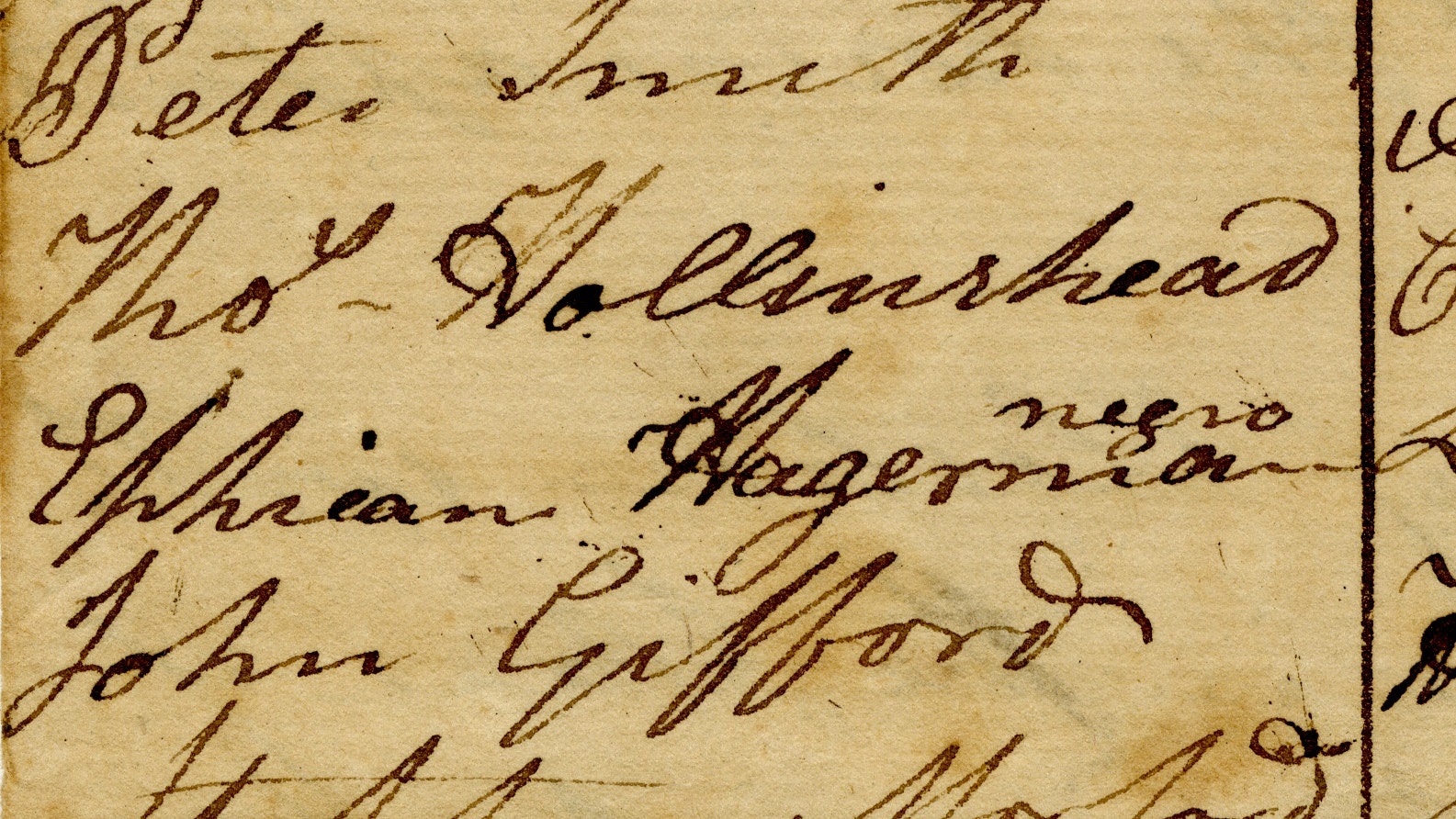 Ephraim Hagerman is the only Black person identified by the word “negro” on the October 1801 Montgomery Township Poll List.  New Jersey State Archives, Department of State

While no other Black voters are specifically identified by their race on surviving pre-1807 poll lists, their racial identities can be confirmed when comparing their names in other primary source documents, such as tax lists. For example, a man named Thomas Blue voted in the same 1801 Montgomery Township election as Ephraim Hagerman. The only Thomas Blue to appear on township tax lists from the years surrounding 1801 is a free Black man named Thomas Blue who had been formerly enslaved by Michael Blew, a farmer of Dutch descent in Blawenburg, Somerset County. A Montgomery Township tax list from 1802 describes Thomas Blue as Black with the word “Negro” next to his name. Thomas Blue was freed by the Blew family in 1788 and lived in the township until about 1805.

In addition to Ephraim Hagerman and Thomas Blue, the Museum has identified at least three other free Black men who voted in early New Jersey, and possibly one free Black woman, Judith or “Jude” Blue, the wife of Thomas Blue. Like her husband, Judith Blue had probably been enslaved by Michael Blew in Somerset County. 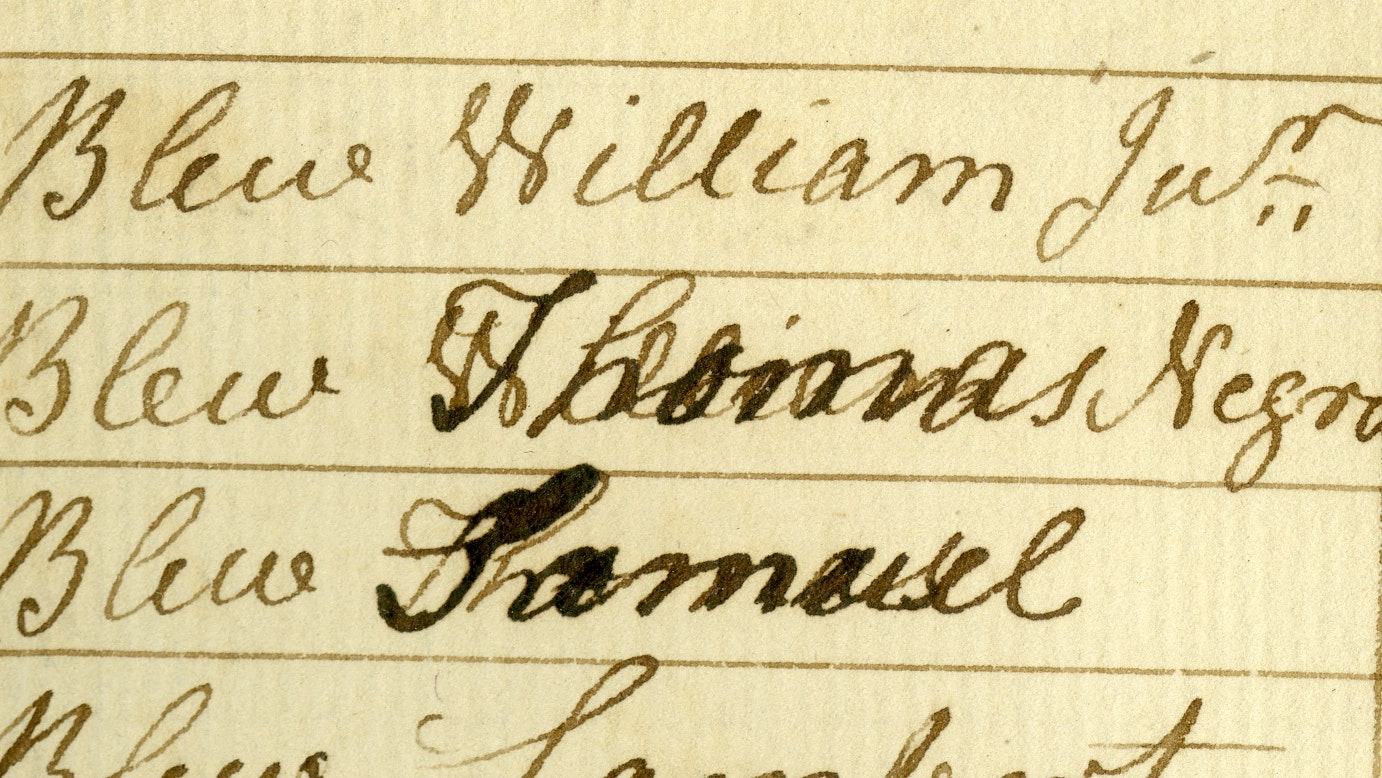 Thomas Blue is listed as “Negro” on the 1802 tax list for Montgomery Township. New Jersey State Archives, Department of State

However, slavery was still legal in New Jersey until it was completly abolished by the 13th Amendment to the United States Constitution in 1865, making for cruel contradictions between the promise of the American Revolution and the realities of slavery for many of the state’s inhabitants. The voting eligibility of people of color in New Jersey depended on their status as either property or property owners. Enslaved people were considered property and could not vote. The value of one enslaved woman in New Jersey was approximately 50 pounds in the 1790s, exactly the amount of property value needed to vote.

It took until 1804 for New Jersey to adopt any form of gradual abolition, making it the last northern state to do so. Many people of African descent lived in slavery, alongside free people of color who owned property and could vote until that right was taken away from all people of color in 1807.

But people of color — men and women — were undoubtedly present at polling places in the 18th and early-19th centuries. In New Jersey, the question is whether they were there as property owners legally exercising their right to vote, or, if they were there as enslaved people, accompanying their owner to prove his or her voter eligibility.