There are different opinions about this name recorded on the poll list. Is it Jude Blue or Isaac Blue?

There are different opinions about this name recorded on the poll list. Is it Jude Blue or Isaac Blue? Read the name and decide for yourself. Biographies of Jude Blue and Isaac Blue, both residents of Montgomery Township in 1801, are included below. Learn more about the Museum’s research process. 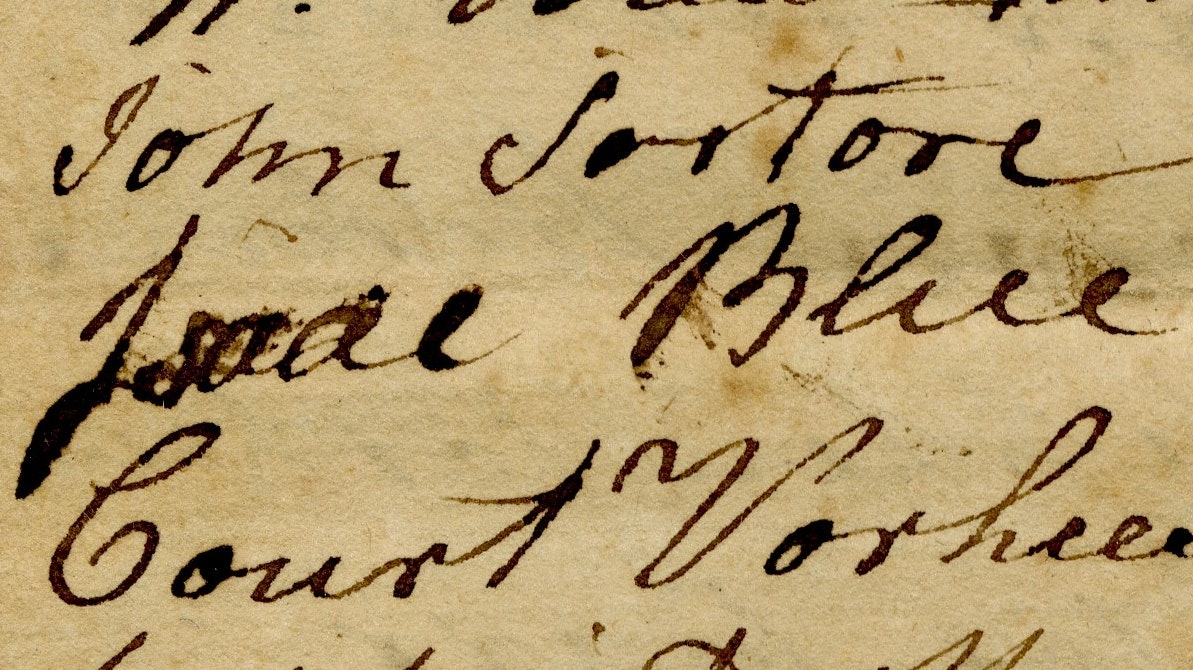 The name in question on the Montgomery Township poll list from 1801. New Jersey State Archives, Department of State

Born in about 1763, Judith Blue (also spelled “Blew” or “Blaw”) was sometimes referred to as Jude or Judah. Blue, a formerly enslaved woman of African descent, may have voted in Montgomery Township in 1801. She is likely the enslaved woman called “Jonah” listed in the 1786 estate inventory of Michael Blew, a slave-owning farmer of Dutch descent from Blawenburg, Somerset County, who died that year. She is also recorded as having a child in that inventory. According to Michael Blew’s will, he left ownership of a “negro wench” to his wife. This is also a likely reference to Judith Blue. That same year, an advertisement placed in the New-Jersey Gazette by Michael Blew’s executors stated that “A likely negro wench” and four enslaved children were to be sold by private sale. This is another probable reference to Judith Blue. It is unclear why she was offered for sale by the Blew family.

Judith Blue had a family of her own. Her husband was Thomas Blue, who had also been enslaved by Michael Blew and was freed from slavery in 1788 by Blew’s executors. It is unknown when Judith Blue became a free woman. Judith and Thomas Blue had one son named Moses. He was born in about 1787, or possibly earlier, while his mother and father were still enslaved and is likely the child referenced in Michael Blew’s 1786 estate inventory. Thomas Blue died prior to 1805, as Judith Blue is listed in the 1805 Montgomery Township tax list as a widow. That same year, Judith Blue and her son Moses (then about 18 years old) purchased a half-acre plot of land from Susannah Lane, a widow, at Stoutsburg in Montgomery Township, near what is today the border of Mercer and Somerset counties, just east of Hopewell, New Jersey (they purchased an additional six acres in 1811). In 1809, Judith Blue entered into communion with the Old School Baptist Church in Hopewell.

Blue lived over 50 years as a widow in Stoutsburg. She died in 1857 at the age of 94. Judith Blue is buried in Stoutsburg Cemetery outside Hopewell. Her gravestone bears the inscription: “In Memory of Judith, relict of Thomas Blew and Mother of Moses Blew died Aug. 1857 in the 94th year of her age.” Moses Blue, who died in 1874 and is also buried in Stoutsburg Cemetery, moved to Franklin Township on the border of Somerset and Middlesex counties in 1814. He was a member of the African Association of New Brunswick and later moved back to the Hopewell-Stoutsburg area. 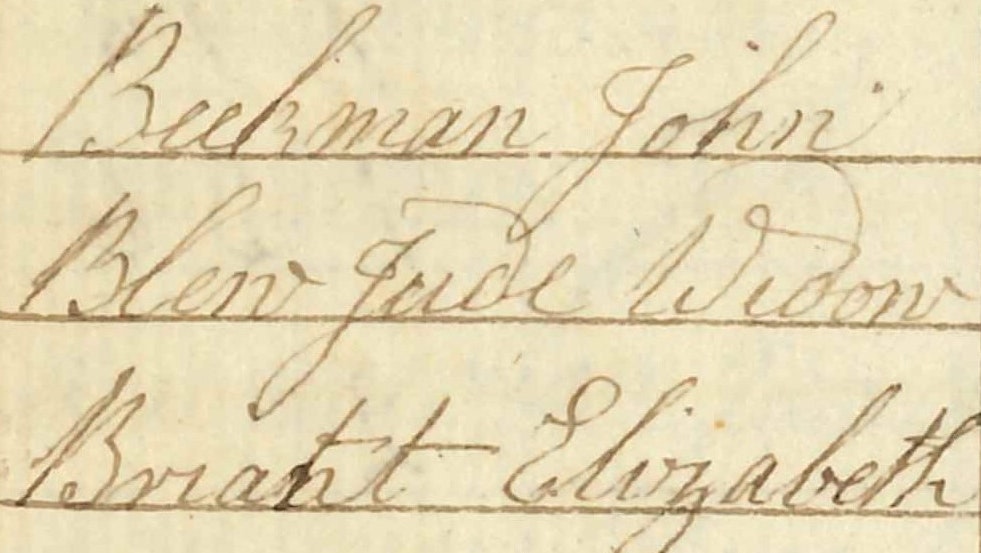 If Judith Blue did vote in 1801, she is the only known free Black woman to have voted in New Jersey during the period from 1776 to 1807. Blue was a married woman in 1801 and her husband, Thomas Blue, is listed as a voter on the 1801 poll list from Montgomery Township. He is also recorded in an 1802 tax list for the township as the owner of livestock and a “householder” or renter. Considering those facts, it is unclear if Judith Blue met the property ownership requirement to vote in New Jersey.

But, if Judith Blue was married, how would she have been able to vote? It is possible that Judith and Thomas Blue married while they were enslaved to Michael Blew (prior to 1788). If this was the case, their marriage would not have been recognized by the state of New Jersey, which did not consider marriages between enslaved couples legally binding until 1809. Under this circumstance, Judith Blue may have been able to own property under marriage, which may have allowed her to meet the property requirement to be able to vote. Judith and Thomas Blue may have also had a marital settlement in place that allowed her to own property. However, it is also possible that Judith and Thomas were legally married after they were both free and before 1801. If this were the case, and Judith Blue did vote in 1801, she may have voted as a legally-recognized married woman.

Judith Blue’s biography is based on the research of Elaine Buck and Beverly Mills of the Stoutsburg Cemetery Association and Jack Davis of the Hopewell Valley Historical Society. Davis’s article “From Slavery to Freedom: The African American Blew Family of Stoutsburg” was published in the historical society’s late winter/spring 2017 newsletter.

On the 1797 tax list for the Western Precinct (known as Montgomery Township after 1798) of Somerset County, Isaac Blue is listed alongside his father as the owners of 200 acre of improved land, 81 acres of unimproved land, eight horses, and two head of cattle. The 1802 Montgomery Township tax list records Isaac Blue below his father’s name as the owner of two 10-acre plots of land, two horses, and two head of cattle (an Isaac Blew, son of William Blew, is also recorded on the tax list but no other information has been located about him). If Isaac Blue, the son of Ezekiel Blue, did vote in Montgomery Township in 1801, he did so when he was about 25 years old. Blue lived as a farmer in Montgomery Township until 1823. His estate was valued at $3,204 upon his death. The inventory of his estate included livestock, farm implements, household goods, and over 87 acres of land. 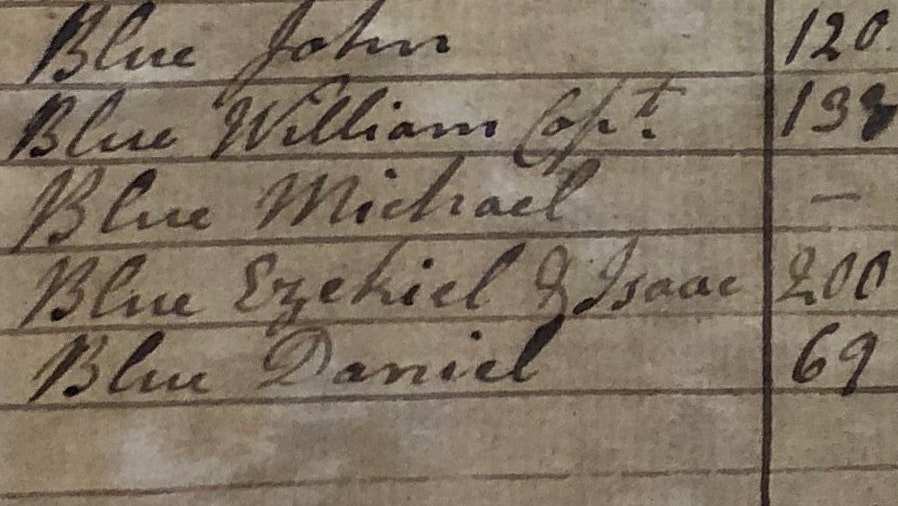