Women of the VanDike Family

Four women of a Dutch slave-owning family — Rebecca, Ann, Catherine, and Sarah VanDike — voted together in October 1801. The latter three were daughters of a known Loyalist, John VanDike. Rebecca was the name of both John’s wife and another daughter. The VanDike women lived together with John on their 227-acre estate.

Four women of the VanDike (also spelled VanDyke or VanDyck) family — Rebecca (also spelled Rebeka), Catherine, Ann, and Sarah — voted alongside each other in Montgomery Township in 1801. The latter three were daughters of Rebecca VanDike and a Loyalist officer from the Revolutionary War named John VanDike. The Rebecca VanDike recorded on the poll list may be John VanDike’s wife or their daughter, also named Rebecca. The VanDike women voted with another woman, Jane Huneman, possibly a relative of the VanDikes. 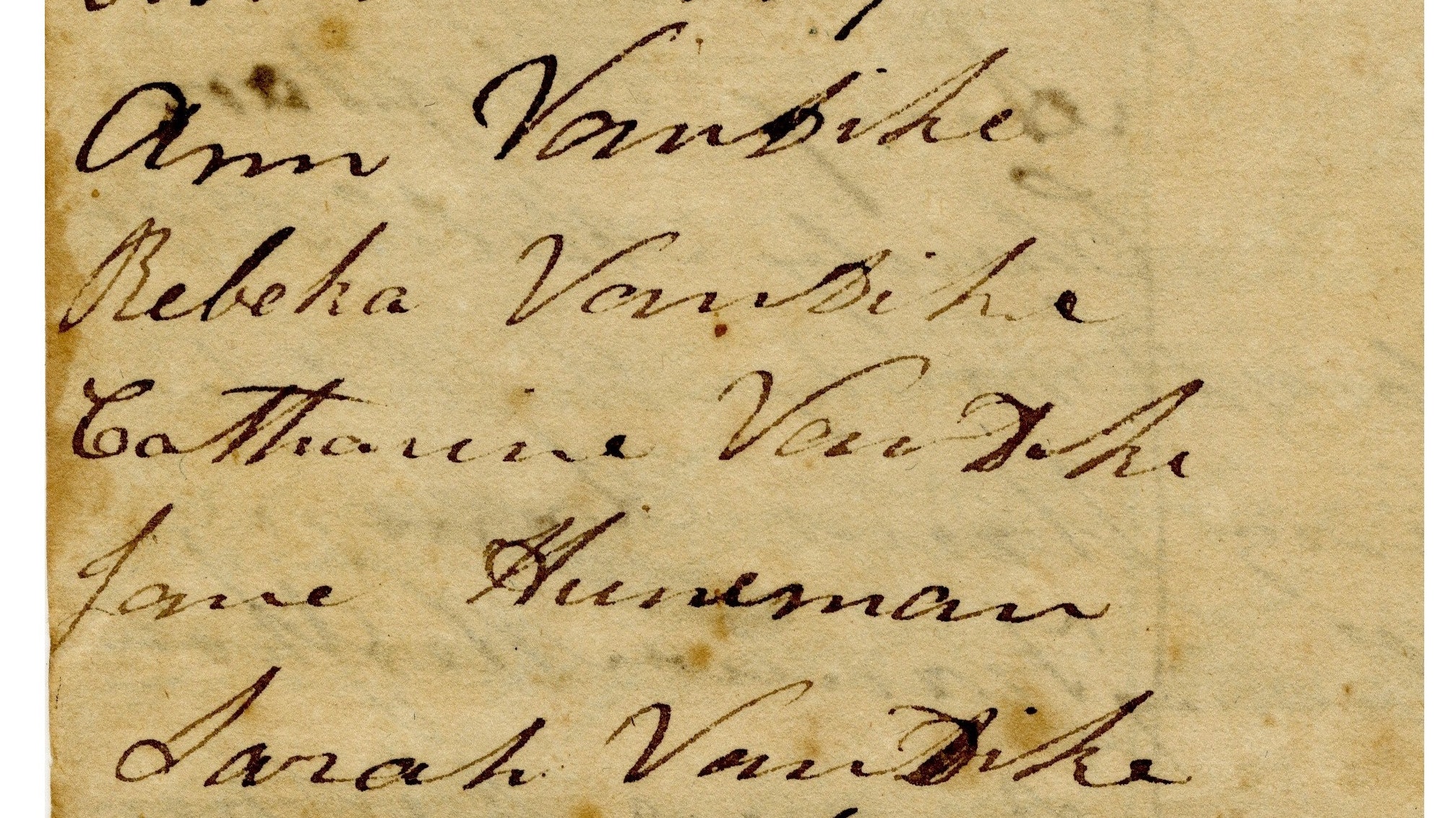 The elder Rebecca VanDike was born around 1741. She was the daughter of Roelof (or Ruloff) VanDike and Catherine Emmons (or Emans). John VanDike, Rebecca’s husband, was also her first cousin. He was born in 1742. The VanDike family was among one of the founding families of Dutch settlers in the New Netherland colony, carving out new settlements in West Jersey.

During the Revolutionary War, Rebecca’s husband John became the only one in his family to maintain his allegiance to the British, earning the moniker John “The Tory” VanDike. When his father, Jan, discovered his son was a Loyalist, he asked John to deed back the ownership of his 200-acre farm he had given him. The two never spoke or saw each other again, and Jan died in 1778. In his will, Jan went against Dutch tradition and did not name his first born son, John, the executor of his estate.

In 1777, the state of New Jersey arrested John on suspicion of being a Loyalist and seized his property. Rebecca tried to defend her husband's reputation by submitting a petition to the state, but her efforts did not succeed and John VanDike fled New Jersey. Rebecca and her father Roelof, John’s uncle, instead purchased the confiscated property at auction; Rebecca paid just over 34 pounds and her father paid 126 pounds. In 1784, when New Jersey required Rebecca to pay back taxes on the land, her lawyer argued that as a married woman under "coverture," VanDike could not own property or accrue debt. We do not know the outcome of Rebecca’s case, but we do know that tax records from months later list her as paying taxes on the family’s 227-acre estate, property given to Rebecca by her father Roelof. Rebecca VanDike’s lawyer filed this petition for her in Sourland, New Jersey, on September 30, 1777 following the state’s seizure of her husband’s property. In it she defends her husband’s reputation and pleads for the restitution of her estate. Her efforts were unsuccessful. New Jersey State Archives, Department of State

John was appointed Lieutenant Colonel of the West Jersey Volunteers in 1778, a Loyalist unit that disbanded that same year. Some records say he then joined the 17th Regiment of Foot, a British regiment. A letter to George Washington from Colonel Israel Shreve in May 1779 reported that Rebecca VanDike, escorted by her brother, Colonel Hendrick (or Henry) of the 2nd Battalion of the Somerset County militia, visited with her Loyalist husband in Elizabethtown. The letter appears to suggest that Rebecca obtained information from John regarding the movement of the enemy forces, suggesting that she may have spied for the Revolutionary cause during the war and thus demonstrated a separate political identity from her husband.

Rebecca’s father Roelof died in 1800. In his will, written in 1786, he left Rebecca 10 acres of land and declared that his personal estate was to be sold and divided between his son Henry, Rebecca’s brother — and also a poll inspector in the October 1801 Montgomery Township election — and Rebecca’s children.

After the war, it is believed that John took refuge in Nova Scotia for a few years before returning to Montgomery Township in the 1790s. In 1793, he purchased and operated the Two Lions Tavern, which he owned until at least 1796. We assume John was welcomed back into his community and his home, the 227-acre estate that Rebecca had been paying taxes on. In 1797, John and Rebecca are listed together as paying taxes on their property, which included at least one enslaved person. 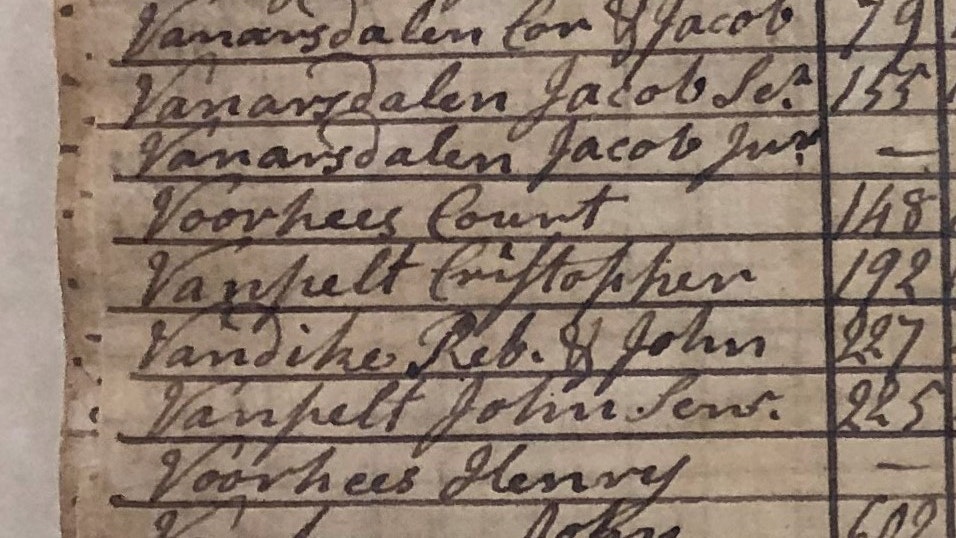 Rebecca VanDike died in 1807 at the age of 66. Her husband John died four years later in 1811, at the age of 69. In his will, he left his 227-acre estate to his son Ruliff, provided he paid 100 pounds to each of his daughters Margaret, Catherine, Ann, Rebecca, Elizabeth, and Sarah. The will further stipulated that his unmarried daughters still living at home — Ann, Catherine, Rebecca, and Sarah — were to “have the same rooms and privileges until they marry.” Finally, John willed two enslaved women to two of his daughters. His inventory was estimated at $2,473.36.

It is currently difficult to determine whether the Rebecca VanDike on the poll list was the mother of the VanDike women voters, or one of the VanDike sisters. This is because of the elder Rebecca VanDike’s unique financial situation and identity as a married woman. While “coverture” laws determined that married women were not typically allowed to own property, and thus legally barred them from meeting the property requirement to be able to vote, Rebecca purchased many acres of her husband’s property at auction in 1777. She is also listed as a head of household paying taxes on the VanDike’s 227-acre estate in 1802, a year after the 1801 election and years after John had returned home. Early tax lists show John and Rebecca listed together as heads of their household. Is it possible that Rebecca VanDike was considered a married woman property owner, which may have entitled her to vote? It is difficult to be sure. At the time of the 1801 election, however, Rebecca and John VanDike’s daughters, Ann, Catherine, Rebecca, and Sarah were single women of means, all in their 30s, and seemingly eligible to vote.

It was not until January 1822, when she was in her early 50s, that the younger Rebecca VanDike married Garrett Beekman. She was Beekman’s third wife and they did not have any children together. Rebecca Beekman died in 1847 at the age of 78. She is buried alongside her husband Garrett at the Beekman Cemetery, just a few blocks from their home, which still stands today. He died the following year. Rebecca VanDike Beekman is buried in Beekman Cemetery, a small cemetery in Montgomery Township, New Jersey, near the home that she and her husband lived in. Photograph by the Museum of the American Revolution