Rebecca Githens lived from 1782 to 1875. She voted along with her father, older brother, and younger sister in 1807. Rebecca Githens was the daughter of George Githens, the prosperous owner of a mineral spring resort hotel.

In October 1807, Rebecca Githens cast her ballot in an election in Moorestown, Chester Township, New Jersey. She was one of 38 women listed as having voted to choose new representatives and public officials for Burlington County. At the time, Rebecca Githens was 25 years old and single. She cast her ballot along with her father George, her older brother Allinson, and her younger sister Martha, who was also unmarried.

George Githens, originally from nearby Gloucester County, rose in prosperity as the owner of a tannery in Colestown, Chester Township. In 1803, Burlington County appointed Githens to be a justice of the peace. He later found another source of income when a mineral spring was discovered on his property in 1810. Advertisements placed in Philadelphia, Boston, Rhode Island, and New York newspapers shared word of the spring’s “medicinal qualities of which are said to be very powerful.” The water was said “to contain saline matter, and iron, which renders it both diuretic and tonic, and therefore generally useful in disorders of the stomach.” Soon after, Githens established the Fountain Hotel, a resort based on the “celebrated” medicinal qualities of the spring that was “so much esteemed by the citizens of Philadelphia and New Jersey.”

When George Githens passed away in 1814 his will dispersed his estate to his wife Mary, who received her traditional “widow’s third,” and 11 children, who each received an equal share. His oldest son Allinson received an additional $500. Githens’s estate was valued at $3,128.54 and his executors put his real estate, including his “mansion house” and the Fountain Hotel, up for sale in 1814. 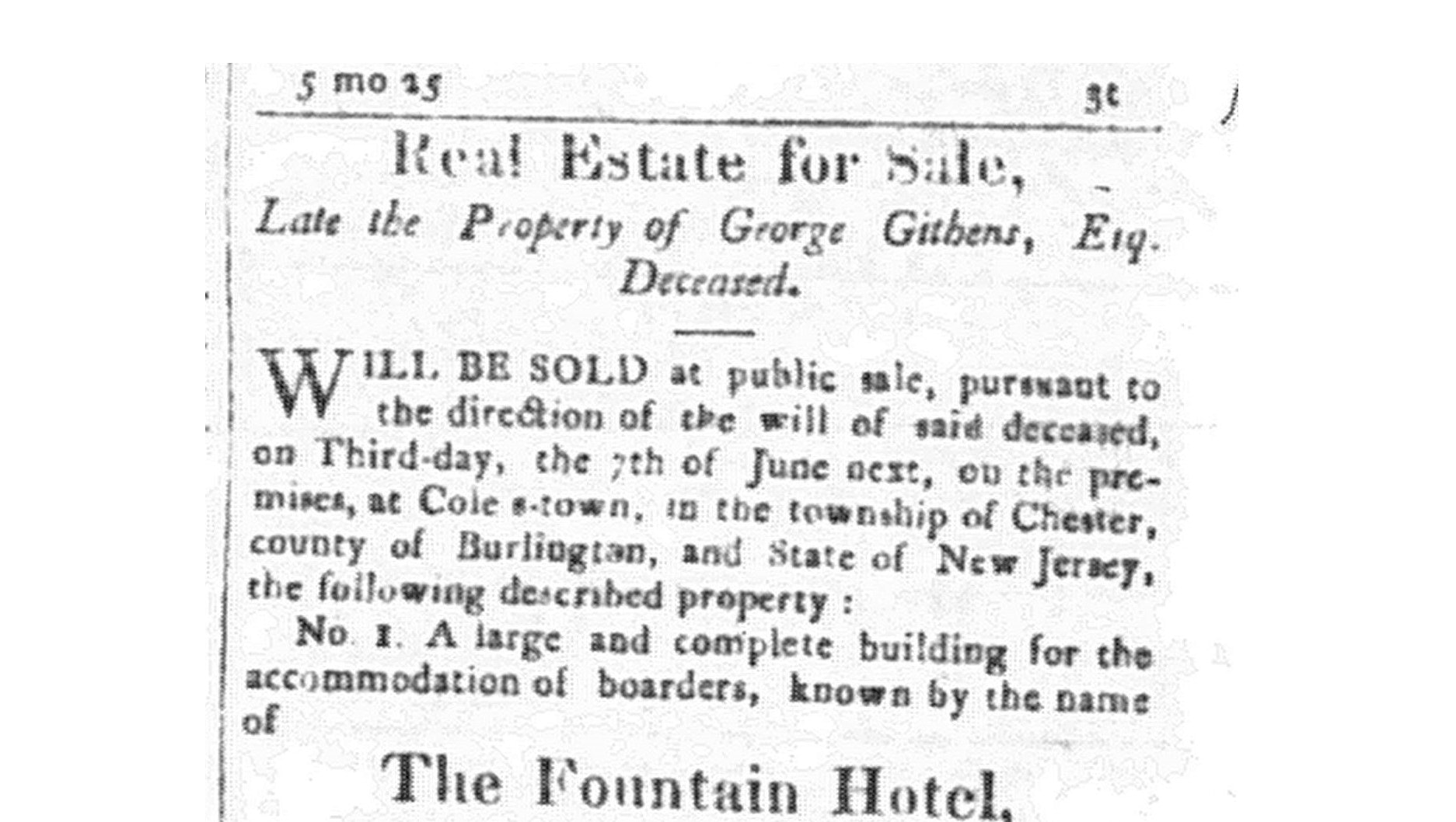 Rebecca Githens lived as a single woman for the entirety of her adult life. She appears on the United States Census for the years 1840, 1850, 1860, and 1870 as a householder in Fellowship, Evesham Township, near to where she grew up and voted in Chester Township. Her younger single sister Margaret lived with her for the entirety of that time. With their inheritance from their father, the Githens sisters’ real estate was valued at $1000 in 1850. In 1860, their real estate had a value of $700, while their personal estate was valued at $100. Ten years later, their real estate had a value of $2000 and their personal estate was valued at $1000. The 1850 census records that their elderly brother Allinson lived in their home, but he died in 1854 before the next census was taken. The 1860 census records that a woman named Mary Haines temporarily joined their household, but she is not listed with Rebecca and Margaret in the 1870 census.

Rebecca Githens’s property is recorded on multiple property ownership maps for Burlington County from the 1800s. Her home was located near where Fellowship Road meets the Camden County border. Githens died on September 3, 1875 at the age of 93, one year after her sister and housemate Margaret. A notice of Rebecca’s death was placed in the September 7, 1875 edition of The Philadelphia Inquirer. The notice said that her funeral was to take place in her home, and it encouraged her friends from Philadelphia to take the train from the city to the local train station, called Wilson’s Station, so that they could attend. Rebecca Githens wrote a will and an inventory of her estate was completed in 1875. Both documents have yet to be located. Rebecca Githens’s grave has not been found, though she is listed as being buried in Laurel Hill Cemetery in the town of Burlington. 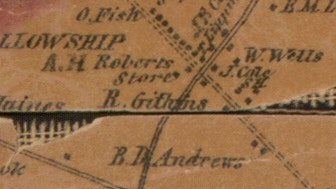 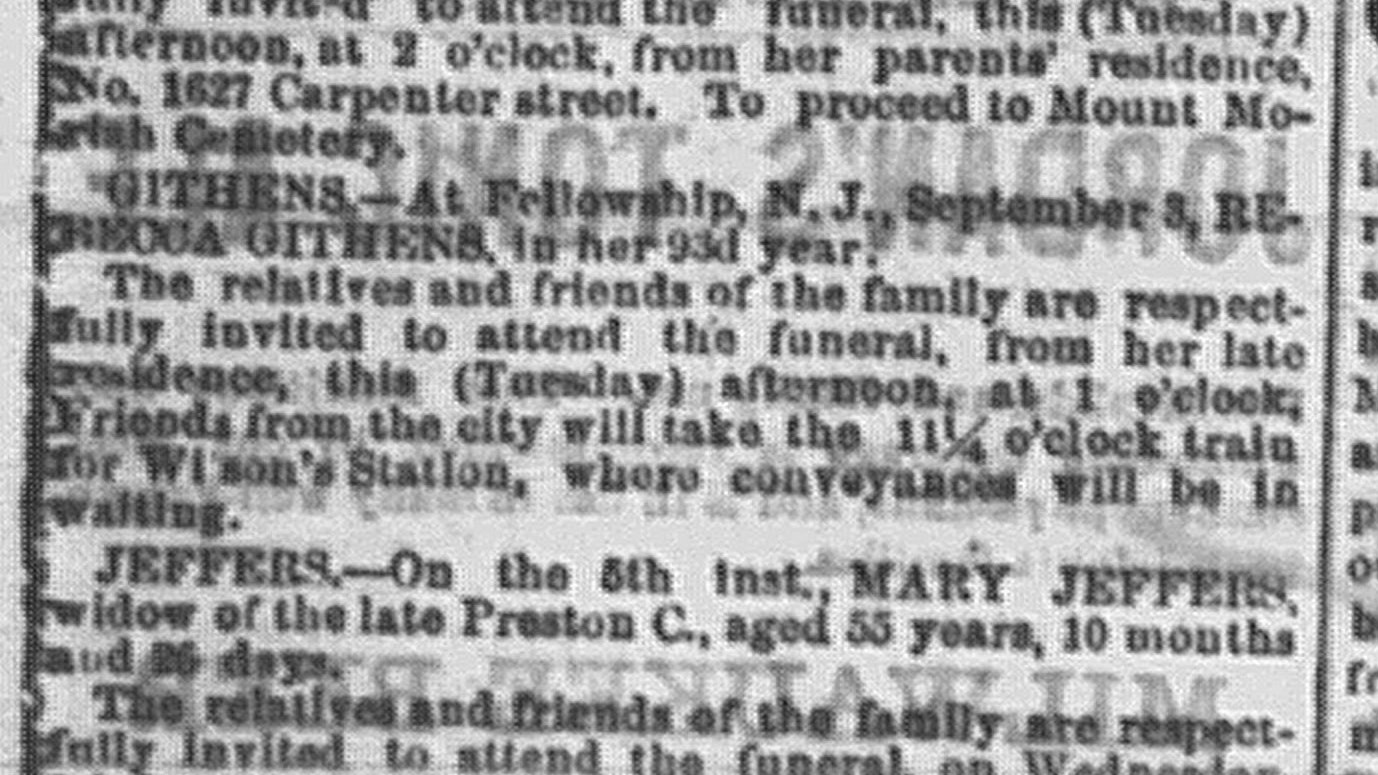 A notice of Rebecca Githens’s death was placed in the September 7, 1875 edition of “The Philadelphia Inquirer.” Serial & Government Publications Division, Library of Congress.