Originally from Philadelphia, former tavern keeper Grace Little lived as a widow in Princeton when she voted. Her property included a farm, livestock, and three enslaved people named Judith, Phebe, and John.

Born in the early 18th century, likely in Philadelphia, Grace Little’s birth name was Grace Gaw. The earliest known documentation of her life is the record of her marriage to Philadelphia tavern keeper William Nicholson on April 29, 1756 at the city’s Christ Church. At the time of their wedding, Nicholson was the proprietor of the Admiral Warren Tavern on Arch Street. In 1757, William and Grace Nicholson left the Admiral Warren Tavern and took over the Indian Queen Tavern on South Fourth Street near the corner of Market Street. William Nicholson died in December 1761 from an illness. His will from earlier that year bequeathed his real and personal estate to his wife and named her as an executor. On April 15, 1762, the publisher of The Pennsylvania Gazette included a notice of settlement for William Nicholson’s accounts and lists Grace Nicholson as one of the executors of her husband’s estate. The notice also states that “the Widow Nicholson intends to keep public House, as usual,” meaning that Grace Nicholson continued to operate the Indian Queen Tavern. 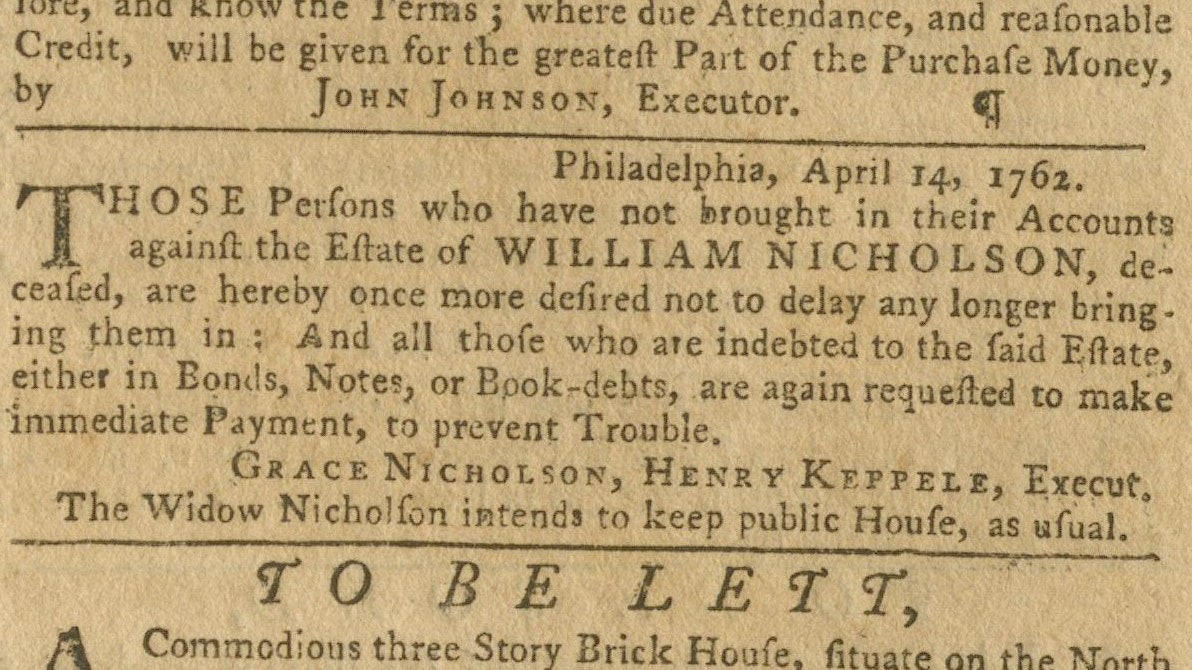 The April 15, 1762 edition of “The Pennsylvania Gazette” includes a notice about Grace Nicholson (later known as Grace Little) serving as an executor of her first husband’s estate. Serial & Government Publications Division, Library of Congress.

Grace Nicholson married John Little on May 22, 1762 in Philadelphia. Little, a veteran of the French & Indian War, had served as a captain in the 2nd Battalion of the Pennsylvania Regiment in 1760. According to an acquaintance who also served in the Pennsylvania Regiment, Captain John Little “married the Widow Nicholson of the Indian Queen” after his military service. John and Grace Little continued to operate the Indian Queen Tavern, one of the most substantial and significant taverns in the city. The Littles counted Benjamin Franklin, Samuel Morris, and Plunket Fleeson as their neighbors and owned one of the larger private lots in the center of the city. They were also slave owners.

During the 1760s and 1770s, the Indian Queen Tavern was a hive of activity. John Little described his tavern in the city newspapers as a place that offered “the best entertainment for travelers and others; having his stables, coach house and shed, in as compleat and elegant order as any on the continent.” Beginning in 1773, the Indian Queen Tavern served as the starting point of a stagecoach that connected Philadelphia and New York via a two-day journey that included a stop in Princeton, New Jersey. The stagecoach left on Tuesdays and Fridays. The Indian Queen Tavern hosted public meetings, meetings of the St. Andrew’s Society, and French language lessons. When the Continental Congress met in Philadelphia, the Indian Queen served as a boarding house and a place to dine for congressmen, including Thomas Jefferson. According to a 19th-century story, Jefferson wrote the Declaration of Independence at the Indian Queen Tavern. That story has since been proven to be a myth. By 1777, the Littles leased the tavern operation to Francis Lee but continued to live on the property.

The Littles aligned themselves with the Revolutionary government in Philadelphia in the 1770s. John Little captained a company of the 2nd Battalion of the Philadelphia Associators in 1775. The Indian Queen Tavern temporarily housed prisoners for the Continental Congress in 1776. During the British occupation of the city in 1777-1778, the Littles seem to have fled Philadelphia. John Little is documented to have helped with intelligence gathering for the Continental Army regarding the British fleet in the Delaware Bay in November 1777.

By the early 1780s, John and Grace Little no longer operated or lived at the Indian Queen Tavern. They had moved to Princeton, New Jersey, and soon became influential members of their new community. John Little was elected as the first Director of the Princeton Fire Company, founded in 1788. The Littles were members of the Presbyterian Church of Princeton (now Nassau Presbyterian Church), with John serving as a manager and financial sponsor of the church’s restoration project in 1784 and a church trustee. John Little died on September 6, 1794 in Princeton and left an estate worth over 1,300 pounds that included seven enslaved people. Grace Little was the primary beneficiary of her husband’s estate, receiving a house in Princeton, 21 acres in Middlesex County, a variety of movables, livestock, farm implements, the ownership of three enslaved people, and 800 pounds outright, followed by a yearly allowance of 200 pounds. The fact that John Little owned additional land in Pennsylvania, and that family members in Philadelphia were named as beneficiaries in his will, speaks to Little’s Philadelphia origins. John Little is buried in Princeton Cemetery.

Grace Little lived as a widow from 1794 until her death on June 2, 1813. She is listed as a widow in Somerset County tax records from the 1790s and 1800s. The 1797 tax list for the Western Precinct of the county records her as the owner of 26 acres of unimproved land, one 10-acre lot, three horses, two head of cattle, one enslaved person, and one dog. She also had a person paying her rent for living in her house. By 1807, she owned 26 acres of improved land and was taxed for owning an enslaved person and a riding chair. She continued to be a member and contributor to the Presbyterian Church of Princeton. During the later years of her life, Grace Little voted in the Montgomery Township election on October 13, 1801 held in Rocky Hill. Her will from November 9, 1812 lists family members, including Gaws, in both Philadelphia and New Jersey as beneficiaries. Grace Little ordered that “Judith, my negro woman, to be free at my decease and the young negroes, Phebe and John, to be free when 25.” Little’s estate was valued at $6,171.01 in 1813. She is buried in Princeton Cemetery. According to late 19th-century historian John Frelinghuysen Hageman, Grace Little “was much respected in Princeton.” 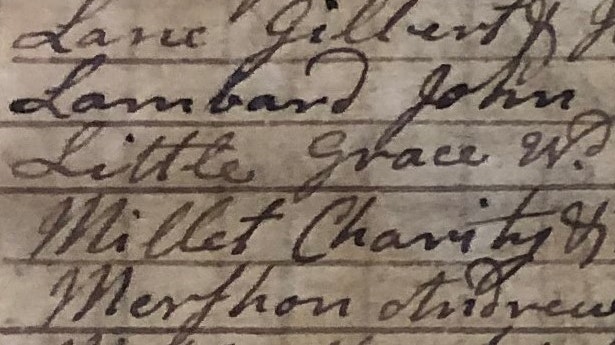 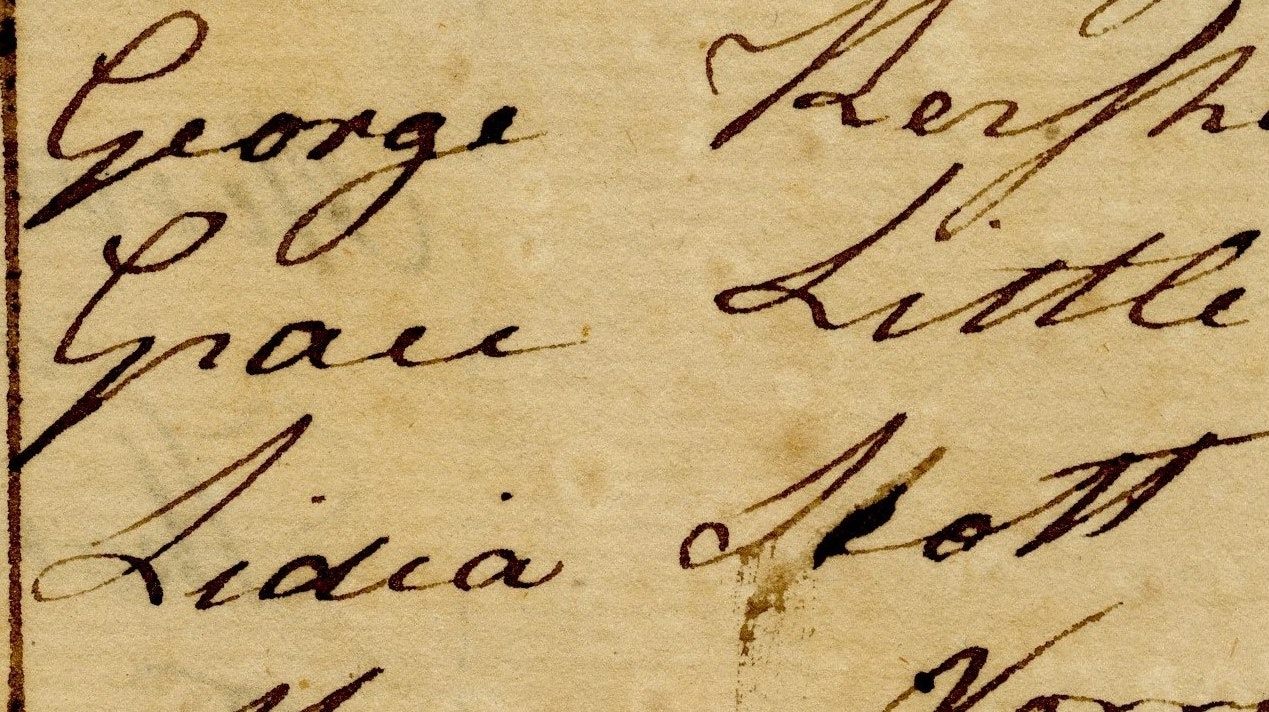