Eleanor Boylan voted when she was about 51 years old and a widow. She lived until 1846 when she died at about the age of 97.

Born in about 1749, Eleanor Boylan lived to be 97 years old. She passed away on February 3, 1846 after living 53 years (the majority of her life) as a widow. Her maiden name was Eleanor Hodge and she married John Boylan of Pluckemin, New Jersey, in the fall of 1767. They were married at the Lamington Presbyterian Church in Somerset County by Reverend James McCrea. Together, John and Eleanor had at least four children: William (b.1777), Hannah (b.1778), Mary (b.1781), and Sarah (b.1787).

According to Eleanor Boylan’s 1837 application for a widow’s pension from the Federal Government, John Boylan served as a Revolutionary militia officer and commissary during the Revolutionary War. However, her pension application was denied because John Boylan’s service did not meet the six-month minimum. Pluckemin, where the Boylans lived, was certainly a crossroads of the American Revolution. After the Battle of Princeton, Washington marched the Continental Army through the village on their way to Morristown. During the winter of 1778-1779, General Henry Knox established a cantonment in Pluckemin for the Continental Artillery that included a grand meeting hall, classrooms, barracks, and workshops. The cantonment was the site of the “Grand Alliance Ball” on February 18, 1779, which celebrated the first anniversary of the alliance between the United States and France. Due to their prominence and proximity to the cantonment, John and Eleanor Boylan may have attended the festivities along with George and Martha Washington, other army officers, and no “less than sixty Ladies.” 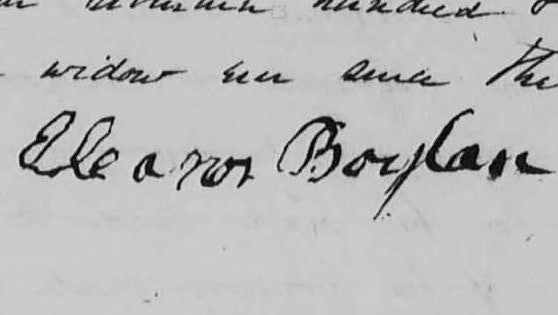 John Boylan passed away in 1793 and Eleanor lived the rest of her life as a widow. She is listed in Bedminster Township (of which Pluckemin is a part) tax lists from 1794, 1795, 1797, 1803, and 1805. According to the 1797 tax list she owned 54 acres of improved land, five horses, and 10 head of cattle. By 1803 she owned 132 acres. The 1803 tax list also records her as the owner of one enslaved person. In the 1800 Bedminster Township voting register, Boylan is listed as a voter. She voted Federalist, casting ballots for Peter D. Vroom for Council, Frederick Frelinghuysen, William MacEowen, and James Van Duyn for Assembly, and Christian Eoff for Coroner. She also voted against revising the New Jersey State Constitution.

Boylan is also listed in the 1830 United States Census for Bedminster Township as a widow. Upon her death in 1846, Eleanor Boylan was interred next to her husband at Basking Ridge Presbyterian Church. Her gravestone remains intact. The February 25, 1846 edition of the The Evening Post (New York City) published a notice of her death: “At Pluckamin, N.J., on the 3d inst., widow ELEANOR BOYLAN, in the 97th year of her age—leaving a large circle of relatives, even to the fourth or fifth generation. For 53 years she has been a widow.” 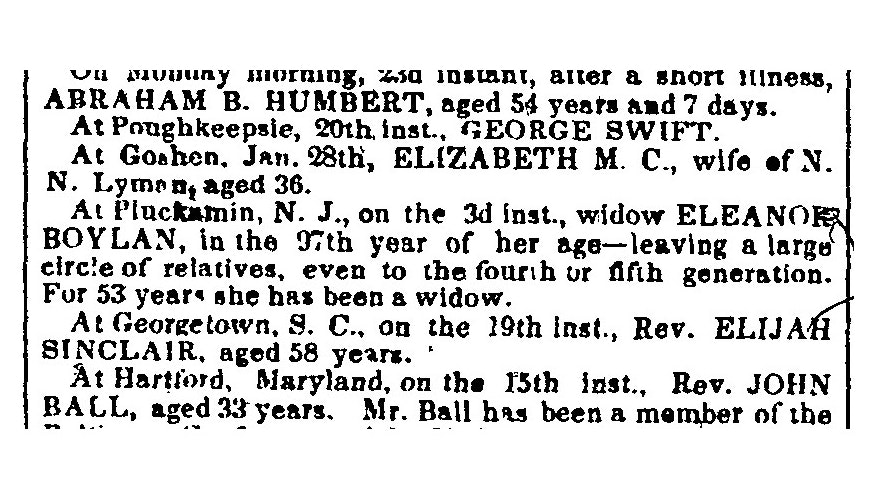