A woman of Swedish descent, Christiana Kitts was born in the 1740s. She voted in December 1800 and died the following year, leaving her estate to her children and grandchildren.

In December 1800, near the end of her life, Christiana Kitts of Upper Penns Neck Township, Salem County, New Jersey, voted in a local election. Likely born in the 1740s, she was the daughter of John and Mary Vanneman of Pilesgrove. Christiana was one of eight children in this family of Swedish descent. When John Vanneman died in 1762, two thirds of his moveable goods was divided amongst his five daughters, including Christiana. The following year, Christiana married Jonas Keen, a young man of Swedish descent from Pilesgrove, at the Raccoon Swedish Lutheran Church (now Trinity Episcopal Church) in Swedesboro, New Jersey. Together, Jonas and Christiana Keen had eight children: John (b.1763), Rebecca (b.1765), David (b. 1766), Jonas (b.1768), Isaac (b.1770), Henry (b.1772), Peter (b.1777), and Margaret (b.1782). The Keen family owned property near the Delaware River, across the river from Wilmington, Delaware. When Jonas Keen died in 1791, Christiana Keen and their son John administered his estate.

As a widow, Christiana Keen remarried. On April 13, 1794, she married widower Robert Kitts at Trinity Episcopal Church in Swedesboro. Kitts, the keeper of the Tavern at Boon Cove in Upper Penns Neck Township, owned 200 acres of land, two horses, nine head of cattle, and he operated a ferry in the 1790s. His tavern served as a meeting point for the surrounding community. Kitts had five children (John, Martilla, Ann, Felix, and Drucilla) with his first wife Mary Kitts. In 1796, Robert Kitts wrote his will. Christiana Kitts was to receive 100 pounds in lieu of her dower, all the silver and household goods she brought to the marriage (valued at over 25 pounds in 1799), and, according to a codicil, a “room next to the Delaware River” and half of the family’s garden. The rest of Kitts’s property was to go to his sons and daughters. His estate was valued at over 1,158 pounds upon his death in 1799. Christiana Kitts got married in 1794 at Trinity Episcopal Church in Swedesboro. The church building (built in 1784) in which Kitts got married still stands and continues to be used by the congregation. Photograph by the Museum of the American Revolution

As a property-owning widow, Christiana Kitts cast her ballot in an election held in Upper Penns Neck Township in December 1800. The following year she wrote a will of her own and passed away soon after. Her will distributed property to her children and grandchildren. For example, her son John Keen received a bed and bedding. Her younger son David Keen received 50 pounds and David’s wife received a black silk gown, a petticoat, and a silk cloak. Her granddaughter Christeen Keen received six silver teaspoons, a pair of gold bobs and rings (earrings), and four sheets. Another son, Jonas Keen, also received a bed and bedding. Her son David Keen received 10 pounds in addition to a high chest of drawers, a stove, and six silver tablespoons. None of her stepchildren are named in her will. Her estate was valued at $574.44. It is worth noting that Christiana Kitts’s step-daughter-in-law, Mary Kitts (widow of Felix Kitts) is recorded as a voter in Upper Penns Neck Township in 1802. It is currently unknown where Christiana Kitts is buried. 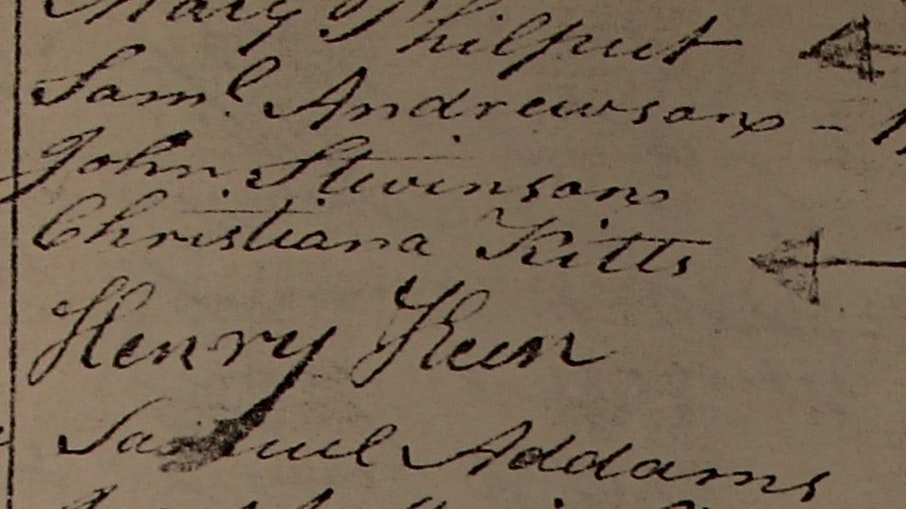