The widow of a tavern keeper and ferry operator, Catherine Helms voted in 1800. She died in 1802 and is buried in the cemetery of St. George’s Episcopal Church in Pennsville, New Jersey.

Catherine Helms voted when she was a widow in an election held in December 1800 in Upper Penns Neck Township, Salem County, New Jersey. Two years later, in 1802, Helms died at the age of 64. Born on April 24, 1738, she was the daughter of Salem County farmer Andrew Boon and his wife Elinor Boon. Catherine Boon had five older siblings: Peter, Andrew, Tobias, Cornelius, and Gartery. When their father died in 1740, Catherine Boon was not named in Andrew Boon’s will, but his sons each received portions of his lands, which included a plantation next to the Delaware River and an “old House.” Andrew Boon’s household inventory was valued at over 176 pounds. Elinor Boon remarried but her second husband, John Mounson, died in 1758. Mounson left his real and personal estate to his wife and, upon his wife’s death, to his stepdaughter Catherine. His estate was valued at 267 pounds. It is currently unknown when Elinor Boon Mounson died. 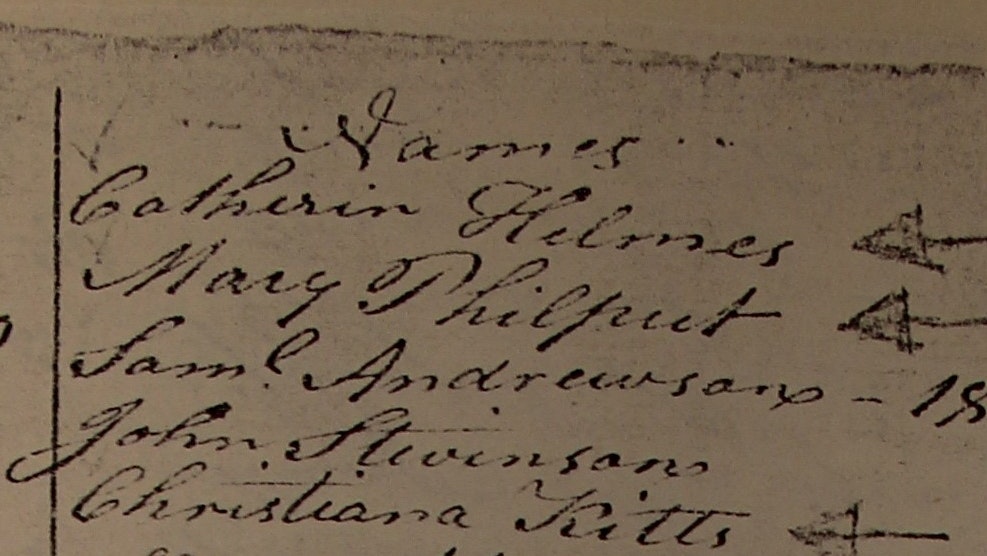 Prior to the 1770s, Catherine Boon married Andrew Helms (b.1736). The Salem County Court granted a tavern and ferry license to Andrew Helms on March 4, 1771. Helms operated his ferry and tavern on land and in a home that his wife had inherited from her mother and stepfather (a home built in about 1732 in which she probably lived as a child). The tavern and ferry were located at what is now the town of Penns Grove, New Jersey. In the 18th century, the area where Helms operated his tavern and ferry was known as Boon Cove and later Helms Cove in Upper Penns Neck Township. The cove is located directly across the Delaware River from the mouth of the Christina River and Wilmington, Delaware. The brick house in which Catherine Helms and her husband lived still stands. Catherine and her family probably witnessed or heard the naval battle that took place off the coast of Helms Cove between the HMS Roebuck and Pennsylvania row galleys on May 8 and 9, 1776 during the Revolutionary War. A local legend says that a British cannonball struck the house during the battle.

Catherine Helms and her husband had at least four children: Elinor, Sarah, John, and Mary. In 1784, Andrew Helms died. His will named Catherine as the executor of his estate. Catherine was granted full use of the lands on which the family lived until John Helms reached the age of 21. Catherine was also to receive “pay and settlement” of the estates of her brother Peter and sister Gartery. Andrew Helms’s estate was valued at over 432 pounds, a good portion of that wealth being derived from his wife and her family.

Catherine Helms lived for 18 years as a widow. Her name can be found on Upper Penns Neck Township tax lists dating to 1789, 1793, and 1797. The 1789 tax list records her as the owner of 200 acres of improved land and six head of cattle. In 1800, Catherine Helms voted with Mary Philput in their township. On August 28, 1802, Helms wrote her will. She granted her personal estate to her daughter Mary Boon Murphy and her Upper Penns Neck plantation to her granddaughter Catherine Hover. She also granted small amounts of money to her other grandchildren and $30 to Sarah Peterson. Catherine Helms’s estate was valued at $958.06 when she died that year. She is buried beside her husband in the cemetery of St. George’s Episcopal Church in Pennsville, New Jersey, about four miles from her home.