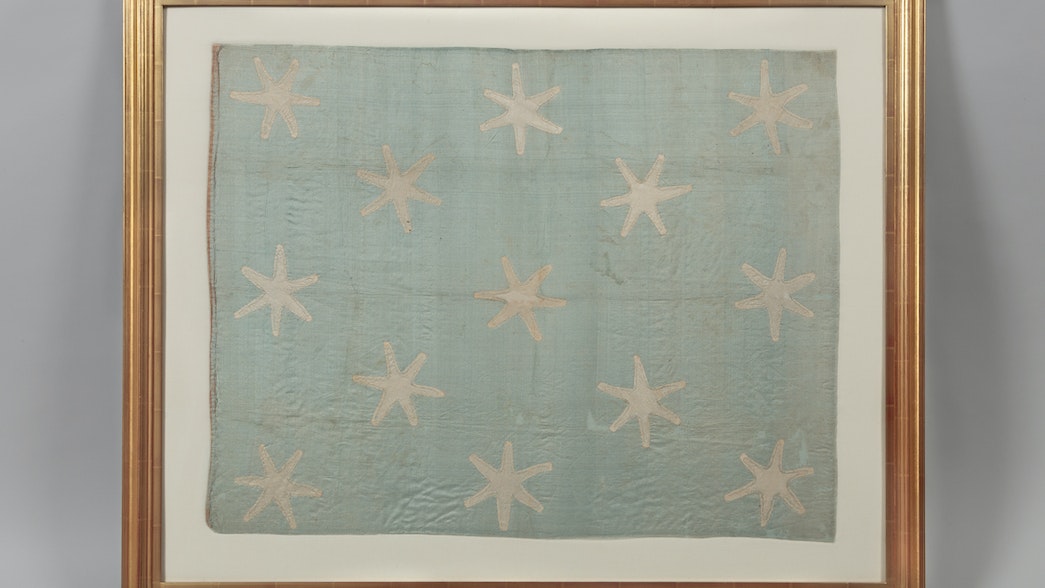 Washington Commander-in-Chief Flag ca. 1777-83 from the collection of the Museum of the American Revolution. Conserved with funds provided by the Pennsylvania Society of Sons of the Revolution and its Color Guard.

WINTERTHUR, DELAWARE – May 20, 2015 – Thirteen stars with six points on a field of faded blue silk tell the story of America’s fight for freedom as George Washington might have seen it. One of three extremely rare flags from the American Revolution, the Commander-in-Chief Flag will be on display June 14 at Winterthur with two additional standouts from the period: the 8th Virginia Regiment’s Grand Division (or Muhlenberg) Flag and the Forster Flag. This unique one-day exhibition marks the first time these three historic banners for liberty, which are among only 35 from the Revolutionary War in existence, are being displayed together.

“According to family tradition, the 13-star flag accompanied General Washington everywhere he went,” said Dr. Scott Stephenson, Director of Collections and Interpretation at the Museum of the American Revolution in Philadelphia, the owner of the Commander-in-Chief Flag. “Donated by descendants of Washington’s sister, Betty Washington Lewis, this flag is one of the greatest treasures in our collection and was recently conserved through a grant from the Pennsylvania Society of Sons of the Revolution and its Color Guard.”

Stephenson will give a talk titled "Banners of Liberty: Three Flags of the American Revolution” from 12:15 – 1:15 pm in Copeland Lecture Hall. The talk will be followed by a special public viewing of the flags from 1:30 – 3:30 pm in the Rotunda. Winterthur staff members Linda Eaton, the John L. and Marjorie P. McGraw Director of Collections and Senior Curator of Textiles, and Lisa Minardi, Assistant Curator, will join Stephenson to answer questions about the flags.

The Grand Division (or Muhlenberg) Flag is from the 8th Virginia Regiment, having descended in the family of the Regiment's original commander, General Peter Muhlenberg (1746-1807) for more than 200 years. Made of two lengths of salmon-colored silk, it is hand painted with a white, ribbon-shaped cartouche that retains traces of the inscription, “VIII Virg(a) Reg(t)” in black and blue.

The Forster Flag is named for 1st Lieutenant Samuel Forster, a prominent shipmaster from Manchester, Massachusetts, who led a group of minutemen toward Lexington and Concord in April 1775. Originally bearing a British Union design in the upper canton, the flag was later altered by the revolutionaries to display 13 alternating red and white stripes. It is one of the earliest surviving flags to use 13 stripes to represent the 13 colonies that became the United States.

From 10:00 am – 5:00 pm, visitors may also tour the museum’s current exhibition A Colorful Folk: Pennsylvania Germans & the Art of Everyday Life, which explores the unique world of the Pennsylvania Germans and their colorful folk art, including decorated manuscripts (fraktur), textiles, furniture, metalwork, and pottery. Embellished with hearts, flowers, birds, and other traditional motifs, these objects reveal a love of color, design, and whimsy. Highlights include a cutwork picture of two soldiers with crossed swords, made circa 1776 for a Mennonite family in Lancaster County, Pennsylvania; inlaid and painted furniture decorated with American eagles, flags, and other patriotic motifs; and a pewter mug owned by Captain Peter Ickes, engraved with an image of a man on horseback and the slogan “Liberty or Death.”

For information, please visit winterthur.org or call 800.448.3883. Admission to the lecture, flag viewing, and A Colorful Folk exhibition is included with general admission and free to Winterthur Members.

Winterthur—known worldwide for its preeminent collection of American decorative arts, naturalistic gardens, and research library for the study of American art and material culture—offers a variety of tours, exhibitions, programs, and activities throughout the year. General admission includes a tour of some of the most notable spaces in the 175-room house as well as access to the Winterthur Garden and Galleries, special exhibitions, a narrated tram tour (weather permitting), the Campbell Collection of Soup Tureens, and the Enchanted Woods children’s garden. $20 adults; $18 for students and seniors; $5 for ages 2–11.

The Museum of the American Revolution, now under construction just steps from Independence Mall, will tell the complete story of the American Revolution using its distinguished collection of objects, artifacts, artwork, and manuscripts. The Museum will serve as a portal to the nation’s many Revolutionary sites, sparking interest, providing context and encouraging explorations that begin at the Museum’s doorstep. The Museum is a private, non-profit organization. For more information, visit AmRevMuseum.org or call toll free, 877-740-1776.