The men, women, and children of African descent living in the 13 colonies in the 18th century were a diverse group of people. They came from different places, spoke a variety of languages, and had lived in the colonies for different amounts of time. Some people were recent arrivals and some had ancestors who had resided in British North America for generations. They had varying statuses of freedom, though the vast majority were enslaved, had a wide range of skills, and performed different types of work. They lived in different regions and social environments, and had different views of the world — politically, socially, and spiritually — that allowed them to cope with their experiences in a variety of ways. This diversity means that, though generalization can sometimes be useful, it cannot allow us to forget that each of these people was an individual within their own context.

The earliest Africans to arrive at an English colony in North America landed at Point Comfort, in present-day Hampton, Virginia. These men and women were likely from the kingdom of Ndongo, in Angola, which is located in West Central Africa. In the intervening years, many more men, women, and children arrived in America from the West Central Africa region, as well as from the Bight of Biafra, Senegambia, the Gold Coast, and the Bight of Benin, among other regions. This included nations we know of today as Senegal, The Gambia, Nigeria, Gabon, Togo, Ghana, Benin, and Cameroon, among others, and peoples from both the coastal regions as well as the interior of Africa, such as the Akan (also known as the Coromantee), Igbo, Yoruba, Hausa, Kongo, Fon, and Mande. Runaway ads placed in colonial American newspapers noted that some of the enslaved African people who had run away were recent arrivals who bore “country marks,” evidence of ritual scarification that had taken place in Africa.

On sugar plantations run by Europeans in the Caribbean, labor was so brutally hard that life expectancy for enslaved Africans hovered around only seven years from first arrival. However, for those enslaved Africans who were taken to mainland North America, it was often possible, despite performing hard labor, to live long enough to have children. Legal marriage was not a possibility for enslaved people, but enslaved people performed social or religious rites and developed creative networks of nurturing, friendship, and support both within or outside of the formal institution of marriage. These networks were often threatened by the realities of slavery — sale or other forced separation, in particular. But these challenges often highlighted the importance of those very networks, as children separated from parents, for example, would be taken in and cared for by others in the community.

Some of the families created in the century and a half before the Revolutionary Era were able to transition from slavery into freedom. Often, one family member received his or her freedom through manumission, perhaps as a reward for military service, for an extraordinary good deed, or simply through their owner’s will upon his or her death. Or, an enslaved person might be allowed to earn their own money outside of labor performed for their owner, and eventually save enough to buy their own freedom. They might then turn their attention to freeing other members of their family, and for many years, their immediate family might include both free and enslaved people. By the 1770s, though rare, there were numerous African Americans whose families had been free in the colonies for a generation or more.

The development of these families over generations meant that, while new Africans arrived in waves and trickles over the years, bringing fresh infusions of their languages, cultures, and more, as time went on, a large population of American-born people of African descent also developed. This group was likely to speak the language of their owners, if they were enslaved, or the languages of the communities in which they resided, if they were free, including German, Spanish, Dutch, French, and English. Sometimes these individuals were bi- or tri-lingual, depending on their history in the colonies. And depending on where they had come from, it was possible that those who had more recently arrived spoke multiple languages as well. Over time, all of this cultural mixing led to creole languages, where words from their mother tongues mixed with words they learned perhaps as free or enslaved sailors onboard ships, or as tavern workers in towns like Philadelphia or Boston, in German Moravian households in North Carolina, or enslaved on tobacco farms in Virginia. Some likely already spoke creole languages due to centuries of trade between Europeans and Africans on the coast of the continent. Unfortunately, one of the cruelties of enslavement was that many owners — in fact the slave-owning society as a whole — tried to erase the cultures and languages of the enslaved, meaning these men, women, and children were often forbidden from speaking their own languages once they arrived in British North America. Still, evidence remains of those languages in the United States, from the Gullah/Geechee creole spoken along the Atlantic Coast of Georgia and South Carolina to the incorporation of words like gumbo, mojo, and banana into the English language. 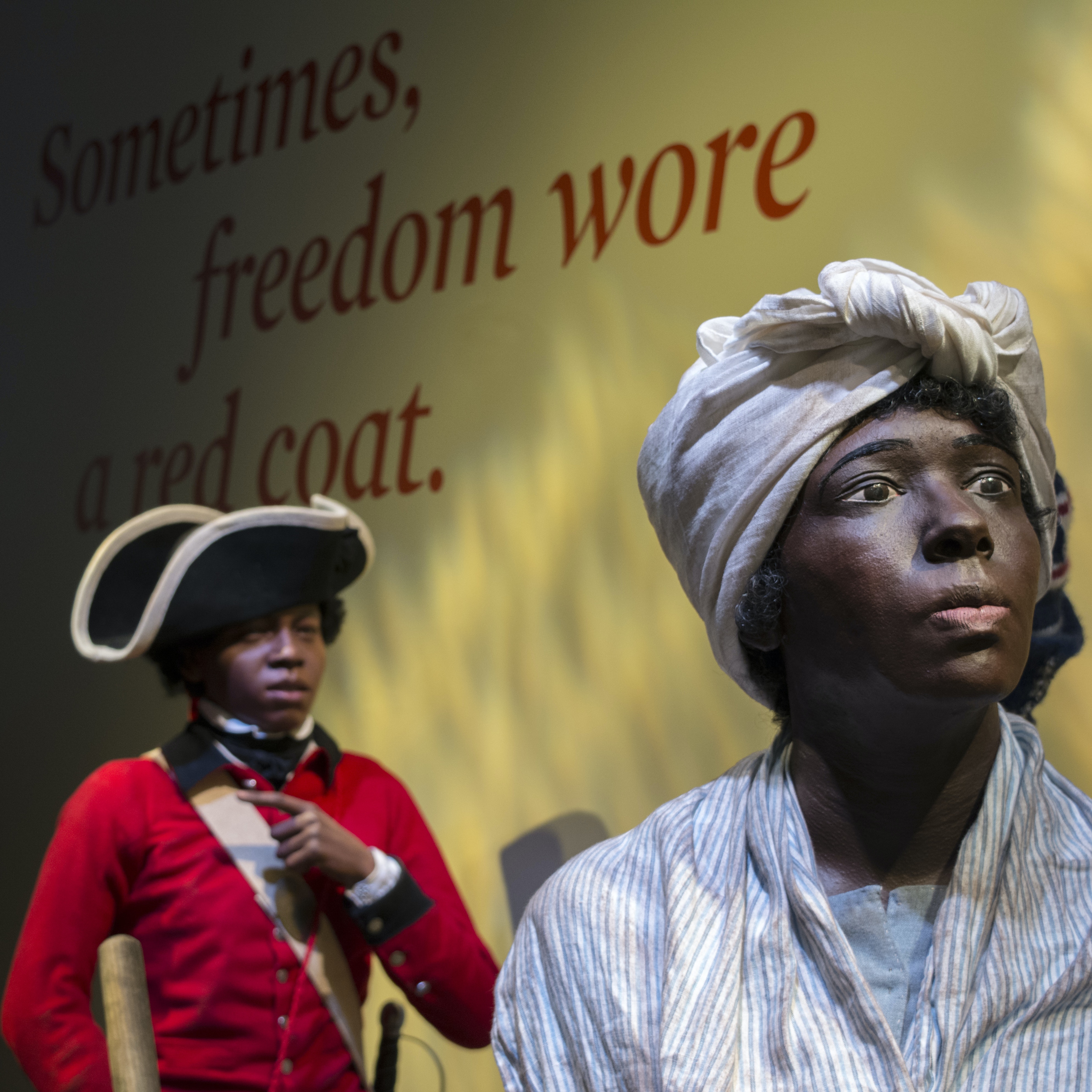 In addition to forbidding enslaved people from speaking their native languages, many slaveowners often tried to strip them of their names. They gave them Biblical names (like Eve, Sarah, Deborah, or Solomon), classical names (like Pompey, Caesar, Hercules, and Cato), or place names (like London, York, or Boston) instead. But some enslaved parents were able to name their own children, and African names continued to be used among both enslaved and free people of African descent. These included names like Quok, Cuffee, Sambo, Omar, Juba, and Quasheba, some of which are examples of African “day names” and some are examples of African Muslim presence in the colonies.

Just as the mixture of African and American-born people of African descent led to creolization of language, it also led to a variety of religious practices among them throughout the colonies. In the earliest years, Christianity had been seen as a barrier to enslavement — part of the rationale the English used for enslaving Africans was that the Africans were not Christians. However, as time wore on, and race-based prejudices and laws developed more strongly, keeping a Christian African enslaved became more acceptable, and many Africans who were already Christian in their countries of origin were enslaved, while others were baptized during their enslavement in the colonies.

But many Africans brought other practices. Islam has been practiced in areas of West and West Central Africa for centuries due to trade with the Arab world. Evidence of this faith exists in primary sources, objects, names, and possibly even cultural forms like the ring shout music and dance tradition from the 1700s. Still other traditions were practiced, incorporating honoring of ancestors and complex understandings of gods, and the spiritual and natural worlds. Elsewhere in the Atlantic world, particularly the Caribbean, such practices might be known as Obeah, Santeria, Voodoo, or other names. Many had roots in Yoruba traditions and were blended with Christian practices.

People of African descent in the 13 colonies sustained traditions through their use of language, spiritual practices, and names. They also did so through communal celebrations, music and dance, and more. In New England colonies such as Connecticut, Massachusetts, and Rhode Island, people of African descent used the larger community’s election day as an opportunity to vote for their own symbolic governors and kings. On this so-called “Negro Election Day,” they hosted inaugural parades while sometimes parodying the social life of their enslavers, building strong social ties in the process. Similarly, in areas with a historically Dutch presence, like New York, a celebration called Pinkster was held, which contained many of the same elements. In Philadelphia, people of African descent were known to care for the burial grounds of their loved ones and also to host holiday celebrations there, where they sang in their own languages and poured liquids into the earth, perhaps as a way to honor their ancestors.

They also established independent economies in various areas, selling goods and produce among themselves and sometimes to their slaveowners for profit. In South Carolina, people of African descent outnumbered white colonists and they controlled the fish markets there. They also used foods from home to sustain themselves physically and spiritually, introducing yams, okra, black eyed peas, and other African foods to southern cuisine. People of African descent in the colonies created a unique form of pottery known as “colono” that was especially prevalent in the South. It showed strong similarities to pottery from West Africa. Even architecture, particularly in the Chesapeake and southern colonies where heat and humidity were frequent, showed similarities to West African traditions, with enslaved people building dwellings much like those they, their parents, or ancestors had lived in back home.

It’s important to understand that people of African descent in British North America in the 1700s were culturally diverse. It’s equally important to understand that their experiences of labor and slavery were diverse as well. While a common perception of slavery in America is of large cotton plantations with huge numbers enslaved people, this is a later development and still masks the diversity of experiences. In the 18th century, an enslaved person in the south was likely growing indigo or rice. In Virginia and Maryland, the primary crops were tobacco and then wheat. Further north, slavery was less focused on larger agricultural farms and family farms were much more the norm. But coastal areas were likely to have many enslaved people involved in the sailing and shipping industries, especially in New England. Towns often used African and African American laborers in taverns and shops; women might serve as waitresses, seamstresses, or cooks, while men might serve as blacksmiths, carpenters, or teamsters. Many of these same positions existed on plantations and large farms, which essentially functioned as their own economies.

Understanding that people of African descent in the colonies on the eve of the American Revolution were diverse in their cultures and experiences reminds us that we cannot treat them as one homogeneous group. Their differences shaped their perceptions of the world and their opportunities in it as colonial conflict with the British Empire loomed.

Use maps, historical images, and more, to explore the diverse peoples of African descent living in British North American in the Eighteenth Century and the communities they created.
Read More